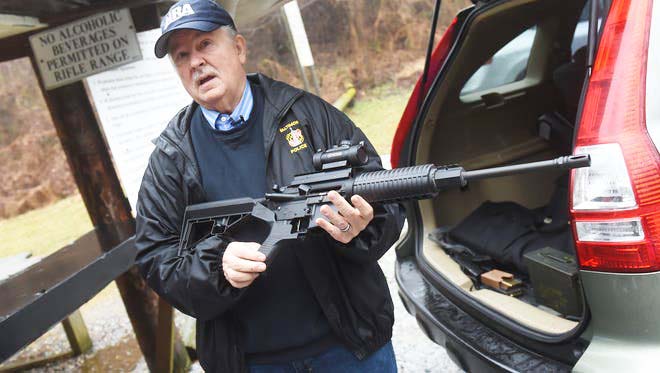 Firearms Advocacy groups say that the AR-15 rifle is the most popular firearm in America, with an estimated 10 million versions of the original ArmaLite design now in civilian hands (Image courtesy of the National Rifle Association).

WASHINGTON, D.C. – In the wake of the mass shooting that claimed 10 lives Monday in Colorado, President Joe Biden has called on Congress to enact a new ban on so-called assault rifles.

Two proposals to expand background checks for weapons purchases and ban the sale of assault rifles are now pending the House of Representatives. But Sen. Dianne Feinstein, D-CA, has introduced even more sweeping gun-control legislation in the Senate.

Feinstein’s proposed legislation, which is co-sponsored in the House by anti-gun zealot Rep. David N. Cicilline, D-RI, was unveiled on Mar. 11.

“I’m hopeful,” Feinstein said in the text of a prepared statement, “that with the new (Biden) administration and Democratic control of the Senate, we can finally pass commonsense gun reforms to remove these deadly weapons from our communities.”

As usual, Republican senators oppose Feinstein’s bill and similar legislative proposals as infringements of the 2nd Amendment to the U.S. Constitution.

“We have to resist the siren call of people wanting new restrictions on guns every time that something bad happens with a gun,” said Sen. Mike Lee, R-UT, in early March, prior to the recent mass shooting tragedies in Atlanta and Boulder, CO.

“We don’t call for the curtailment of freedom of speech or freedom of religion when someone misuses one of those rights,” Lee explained. “Then the response is to go after the illegal activity itself, rather than try to undermine the constitutional right.

“That’s should be true of the 2nd Amendment just as it is with the 1st Amendment.”

Feinstein’s proposal already has 34 co-sponsored in the Senate, all of them Democrats. Her office also boasts of the support of 50 large and small anti-gun organizations nationwide.

Critics of her bill say it goes far beyond a ban on so-called assault weapons, the most common of which in the U.S. are American-made semi-automatic AR-15’s and Soviet-bloc or Chinese surplus AK-47’s (although semi-automatic copies of this rifle are also manufactured by American firms).

The “2021 Assault Gun Ban” would impact 205 firearms by name. Those include any rifle with a pistol grip; a forward grip; a folding, telescoping or detachable stock; a barrel shroud; or threaded barrel.

Shotguns with similar features would also be banned, as would any shotgun with a detachable magazine.

Laughably, Feinstein’s critics said, her bill would also ban any weapons with an attached grenade launcher, which are already illegal under federal statutes.

Feinstein’s so-called “assault weapon” ban would also halt the sale of scores of pistol designs, including any handguns with a threaded barrel; a second pistol grip; a barrel shroud; or a detachable magazine not seated in the pistol grip.

The text of her bill would also ban any semi-automatic copy of an automatic weapon design.

The problem with such legislation, its critics contend, is that it attempts to “lock the barn door after the horse is already loose.” The reality is that an estimated 300 million firearms already in circulation in America would be legally grandfathered as long as they are safely stored.

That estimate includes some 35 million rifles and handguns that would probably meet Feinstein’s dubious definition of an “assault weapon,” although gun aficionados insist that no semi-automatic firearm can really be considered an assault weapon.

According to the National Shooting Sports Foundation, there are probably as many as 10 million AR-15’s in the hands of American civilians and likely an equal number of AK-47 clones.

NSSF officials say that Feinstein’s proposal will effectively end the manufacture and sale of all new semi-automatic firearms in the U.S., however, putting tens of thousands of skilled employees out of work.

Anticipating that such legislation would be forthcoming from a Congress controlled by Democrats, Utah lawmakers attempted to shortcut federal gun control measures during the recently concluded general session of the Legislature.

The Utah House overwhelming passed House Bill 76, the “Firearms Preemption Enforcement Act,” in late February. That proposal would have given the Legislature the option to selectively enforce any federal firearm laws. The measure would also have prohibited Utah cities and counties from adopting their own firearm regulations.

Ultimately, HB 76 stalled in the Senate Rules Committee and was never debated prior to the end of the legislative session.

Officials of the National Rifle Association and other firearms advocacy groups have predicted that any far-reaching gun control measures enacted by Democrats in the 117th Congress will immediately be challenged in federal courts as a violation of the 2nd Amendment.