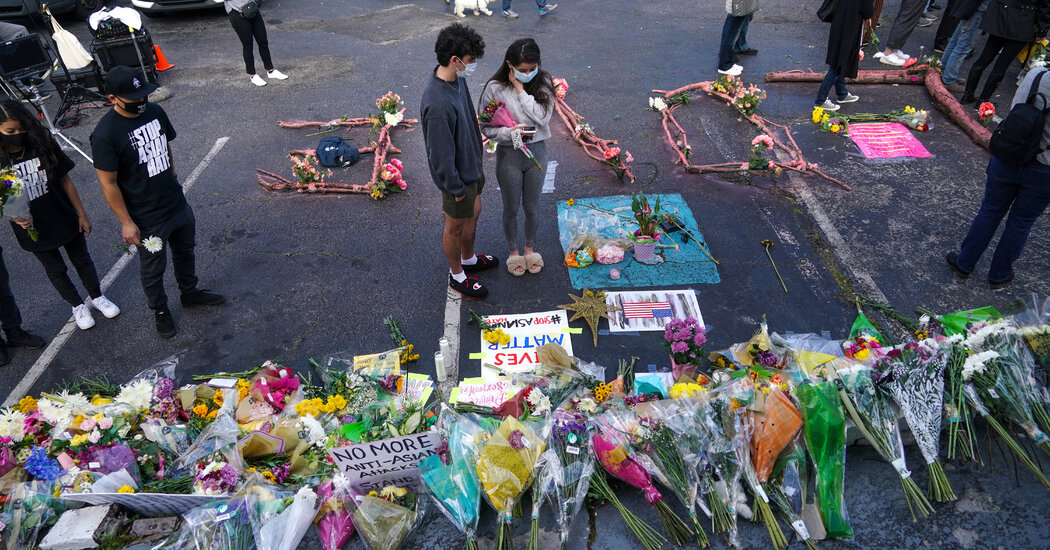 WASHINGTON — Supporters of gun control lashed out at President Biden on Friday for suggesting a day earlier that gun legislation would not be his next priority even after two mass shootings in a week.

Mr. Biden initially said on Tuesday that he did not need to “wait another minute” to address the epidemic of gun violence, calling on the Senate to pass a ban on assault weapons and to close background check loopholes.

But on Thursday, at the first formal news conference of his presidency, Mr. Biden left gun control proponents dumbstruck and disappointed when he said the key to legislative success was ordering priorities, and that infrastructure — not guns — was next on his list.

“I’m disappointed he has the nerve and audacity to say he’s going to do things in sequential order,” said Maisha Fields, the vice president of organizing for Brady: United Against Gun Violence, a nonprofit group. “It’s out of order to have to bury your child. It’s out of order to be shopping for eggs and to have your life disrupted.”

At his news conference, Mr. Biden was asked specifically about his plans for promoting gun legislation or using executive actions on the issue. In response, he pivoted to a lengthy explanation of why infrastructure was a bigger priority for him.

To some, the response was a pragmatic approach by a president dealing with crises on multiple fronts and a blockade of opposition by Republicans to any gun control measures.

But gun control supporters said they were appalled by his shift in tone from a year ago, when Mr. Biden said on the campaign trail that “every day that we do nothing in response, it is an insult to the innumerable lives across this nation that have been forever shattered by gun violence.”

During the campaign, Mr. Biden also promised on his first day in office to send a bill to Congress that would repeal liability protections for gun manufacturers and close background-check loopholes. He has not done so yet, 65 days into his term.

“I was very frustrated that he pivoted to infrastructure week,” said Igor Volsky, the founder of Gun Down America. That the administration has not approached gun legislation with the same intensity that it brought to its $1.9 trillion pandemic rescue plan — which passed with no Republican support — only added to his frustration, he said.

“We saw what they can do when they hit the gas pedal,” Mr. Volsky said. “They got it across despite unanimous opposition. That’s the kind of leadership we need to see on this issue.”

The House passed two gun control bills this month but they are languishing in the Senate in the face of Republican opposition and the chamber’s 60-vote threshold for passing most legislation.

“This crisis is beyond any other crisis we’ve seen,” said Greg Jackson, the national advocacy director for the Community Justice Action Fund, a group focused on gun violence in communities of color.

After the 2012 shootings at Sandy Hook Elementary School in Newtown. Conn., where 20 children and six adults were murdered, President Barack Obama vowed to press Congress to ban military-style assault weapons and high-capacity magazines, expand background checks and toughen gun-trafficking laws. He has described his failure to pass any legislation as one of his biggest regrets.

In 2019, President Donald J. Trump briefly said he would push for what he described as “very meaningful background checks,” after a pair of deadly mass shootings in Texas and Ohio. But after discussions with officials from the National Rifle Association, he reversed himself, saying he was concerned with protecting the Second Amendment and that the country had “very strong background checks right now.”

Notably absent from the public chorus of disapproval on Friday was Everytown for Gun Safety, one of the most influential gun violence prevention organizations in the country. While John Feinblatt, the group’s president, has been encouraging Mr. Biden to act immediately, he has so far not openly criticized him for a delay.

A spokeswoman for Everytown, Stacey Radnor, said the group was continuing to work closely with the White House to carry out executive actions and pressure Congress to act.

Jen Psaki, the White House press secretary, said at a news briefing on Friday that Mr. Biden understood the frustration among gun control proponents. But, she added, that “frustration should be vented at the members of the House and Senate who voted against the measures the president supports, and we’d certainly support their advocacy in that regard.”

Po Murray, chairwoman of the Newtown Action Alliance, said the administration’s “inconsistent” messaging was a problem.

“We’re trying to figure out what’s happening here,” she said. “We pushed for it, we supported him, we expected a better response after the election.”

The administration has been working on three executive actions on guns but has yet to roll them out.

One would classify so-called ghost guns — kits that allow a gun to be assembled from pieces — as firearms, which would require their sales to be subject to background checks. Another would fund community violence intervention programs, and the third would strengthen the background checks system, according to congressional aides familiar with the conversations.

Ms. Psaki declined to provide a timetable for any executive actions.

Some gun control supporters also said they wanted to see a more senior official at the White House overseeing the issue. Susan E. Rice, the director of Mr. Biden’s Domestic Policy Council, has been serving as the internal point person on efforts addressing gun violence. But Mr. Obama put his vice president, Mr. Biden, in charge of the issue after the Sandy Hook shootings.

Ms. Murray said she had the perfect figure in mind to serve as Mr. Biden’s point person on the issue.