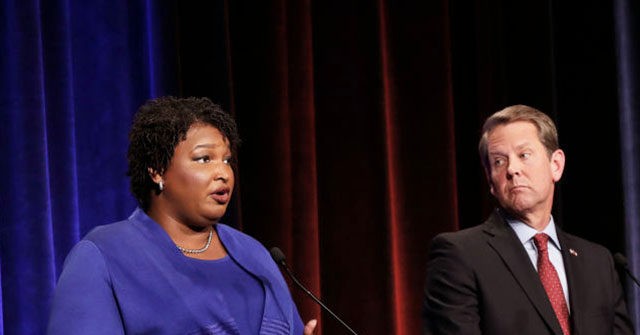 Abrams excoriated the bill, SB 202, upon its passage Thursday, calling it an act of voter suppression and “Jim Crow 2.0,” but Kemp celebrated the bill as a means of expanding voter access and increasing security in the state’s election processes. The governor accused Abrams, who founded Fair Fight — a voter rights organization and fundraising giant — of intentionally spreading inaccurate information about the bill as a money-making scheme.

“Stacey Abrams is making a lot of money off of this,” Kemp told host Matthew Boyle. “She’s getting billionaires and other people and people that don’t even have a lot of money to give money to this cause, really saying things that are untruthful to pad her bank account.”

Kemp also said President Joe Biden — who, like Abrams, criticized the bill as “Jim Crow in the 21st Century” — displayed a lack of awareness for the bill’s provisions, arguing Biden has failed to acknowledge strict voting measures in his own home state of Delaware and that Biden’s focus on Georgia’s new law allows the president to shift attention away from the growing southern border immigration crisis.

“I think Joe Biden’s so focused on Georgia’s election law even though he doesn’t know his own laws in his own state are more restricted than we are to take the focus away from the outrageous things that are happening on the border right now with kids being trafficked and people swarming across the border,” Kemp said.

The governor added, “I think that’s probably orchestrated probably not by him but his political minions that are serving in the White House now.”

One provision of the bill specifically gained attention after some voices, including Abrams’, suggested voters waiting in lines at polls were prohibited from having access to free water.

Kemp clarified, “Certainly any voter can bring water. They can bring food. They could order a Domino’s Pizza … while they’re standing in line, but we’re not going to allow a state representative or me as governor that’s on the ballot to go out and hand water, which has actually happened before in Georgia. We’re not going to let third party groups do that whether it’s Stacey Abrams’ group, the NRA [National Rifle Association], or anybody else. That would be inappropriate within 150 feet of a polling location, but you know if you get outside of that boundary, you can hold political signs up and you can do basically whatever you want. This is just making sure voters are not bothered or intimidated while they’re in line and voting.” He added that polling locations will be able to set up self-service water coolers for those waiting in line.

Abrams, dismissing the intent of the bill’s language, had written on social media, “They criminalize free water & food for those in line”:

GOP legislators gave themselves the right to takeover local elections & throw out results – what they tried and failed to do in MI. They raised costs for taxpayers and forbid counties from accepting funds to cover the bill. They criminalize free water & food for those in line. 3/

Kemp described Abrams’ persistent attacks on the bill as a “scam and a racket.”

“And then you got Abrams that is making money on this,” he said. “It’s just a scam and a racket in many ways, and I’m just so thankful that you guys and a lot of other people like the Wall Street Journal and the New York Post and the Washington Examiner and others that are simply putting the facts out there because you know even the Atlanta paper is putting editorials out there that are just factually not correct.”

Write to Ashley Oliver at aoliver@breitbart.com.