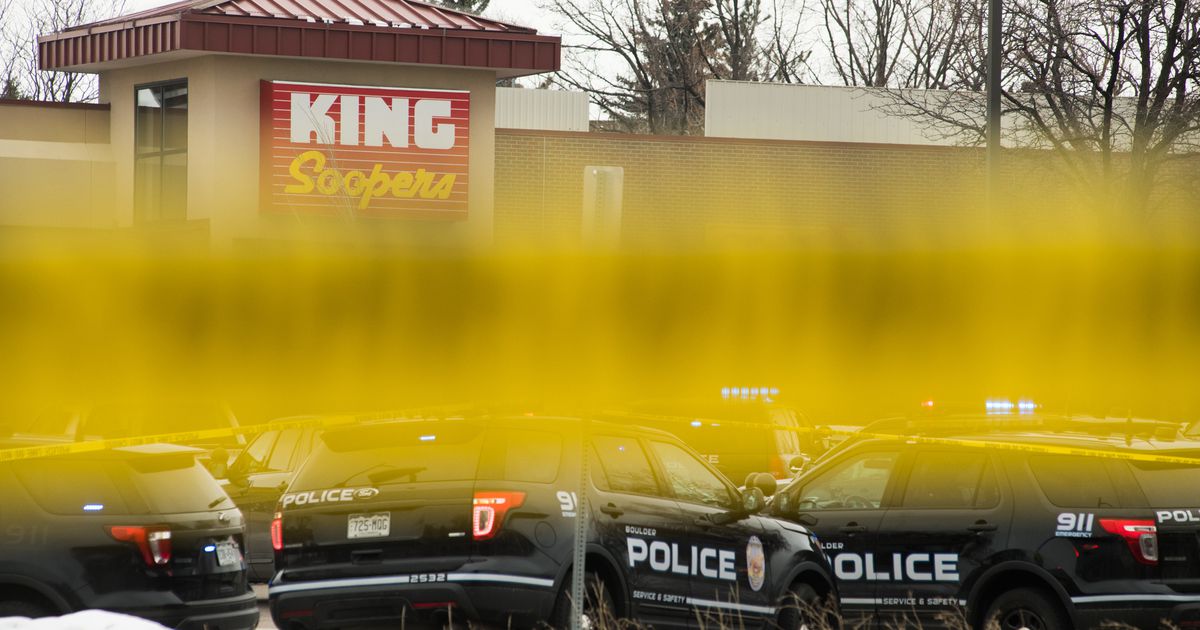 What about that well-regulated militia part of the Second Amendment?

(Theo Stroomer | The New York Times) Police vehicles in the parking lot of the Boulder King Soopers grocery store after a shooting that killed multiple people in Boulder, Colo., on Monday, March 22, 2021.

By Christopher Smart | Special to The Tribune

In the USA, patriotism grows out of the barrel of a gun. Just ask Colorado Rep. Lauren Boebert or Georgia Rep. Majorie Taylor Green. If you want to be patriotic, you take your Glock with you wherever you go, including that nation’s Capitol. You see, we must protect freedom and our Second Amendment right to bear arms.

It also means that crazy people can easily buy assault rifles and go on murder sprees that take the lives of innocent children, women and men — which also destroys their families and communities. Some freedom.

In the 1770s, the Founders could not imagine life in 2021. If they could, there would be no Second Amendment. Then, Gen. George Washington, leading the small Continental Army, needed the aid of local militias. At a moment’s notice, civilians would muster for skirmishes with the imposing Redcoats. Even after the War of Independence, the Founders feared the fledgling democracy could be overrun by foreign forces.

The Second Amendment made sense then: “A well regulated militia, being necessary to the security of a free state, the right of the people to keep and bear arms, shall not be infringed.”

Today, we do have a well-regulated militia — the National Guard. The nation is not about to be overrun by foreign powers. So why, then, do people insist that every American should be able to buy a gun on demand?

According to the late Supreme Court Justice Antonin Scalia, writing for the 5-4 majority in the 2008 case of District of Columbia v. Heller: “The Second Amendment protects an individual right to possess a firearm unconnected with service in a militia, and to use that arm for traditionally lawful purposes, such as self-defense within the home.”

Unconnected? So why did the Founders even mention militias?

The modern political framing against gun control began to be set in 1979, when the National Rifle Association became strident in its defense of gun rights and its interpretation of the Second Amendment, according to Robert Spitzer, State University of New York.

Until then, the NRA supported waiting periods and background checks. But since the Sandy Hook Elementary massacre on Dec. 14, 2012 — where 20 young children and six adults were killed — the NRA has stopped every national effort for reasonable gun restrictions.

The late 1970s also was the time Richard Viguerie and Paul Weyrich recruited televangelist Jerry Falwell into a coalition of economic and social conservatives around a “pro-family” agenda, according to historian Jill Lapore. It would target abortion, gay rights, the Equal Rights Amendment and sex education, sowing the seeds of the “Culture Wars.” Guns became part of the mix.

A June 2018 report from the Small Arms Survey estimated that American civilians own 393 million guns. Nonetheless, conservative pundits and politicians often proclaim, “They are coming for your guns,” and any restriction, no matter how small, will lead to a complete ban.

But according to an August 2019 Quinnipiac poll — 61 percent of Americans favor stricter gun laws (that has since dipped to 57 percent). But the breakdown by party is telling – 91 percent of Democrats want stricter guns laws, as do 59 percent of independents, but only 32 percent of Republicans want them.

Columbine was 22 years ago. Think about it. In 2020, there were 43,469 firearm deaths in the U.S., according to Gun Violence Archive. Of them, 19, 379 were homicides, 24,090 were suicides. But we shouldn’t expect Republican leaders to make significant changes in gun laws until it is their wives, daughters or sons who are shot dead.

Christopher Smart is a freelance journalist in Salt Lake City and author of Smart Bomb, which appears in City Weekly.