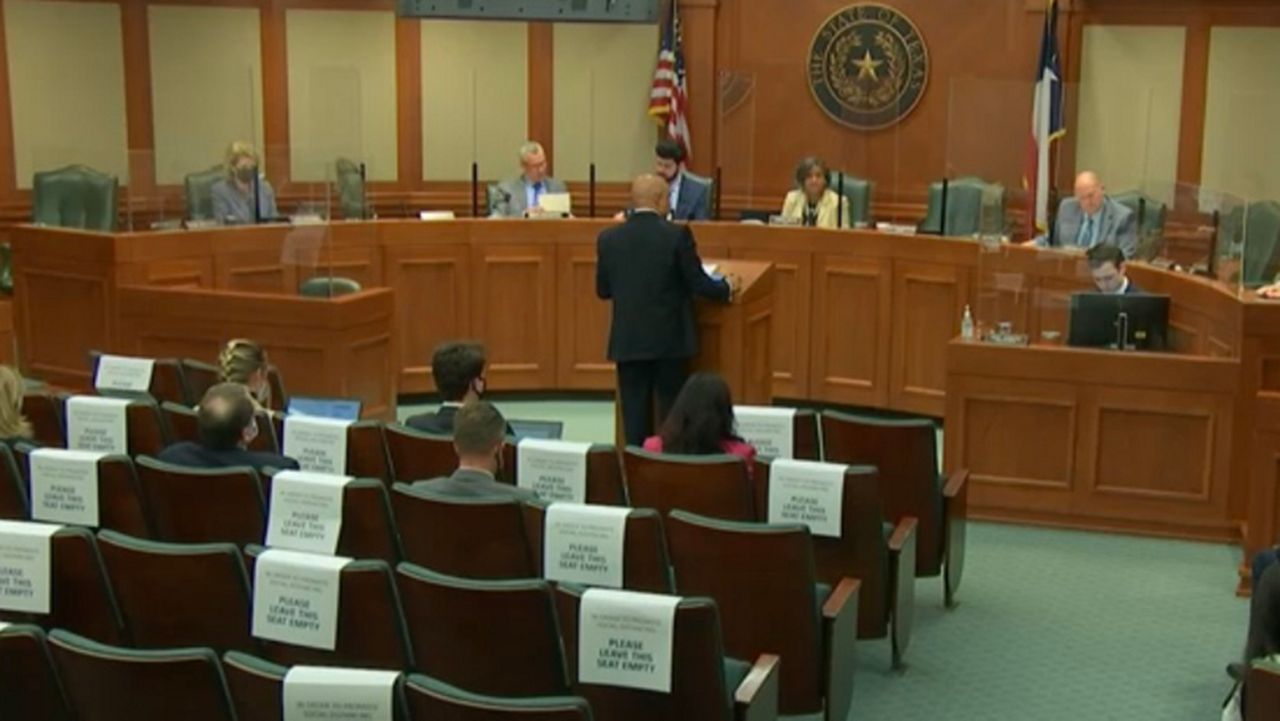 AUSTIN — For nearly two hours, committee members listened to those voice either support or opposition to House Bill 929, Bo’s Law Safe at Home. The bi-partisan bill was introduced during a Homeland Security and Public Safety Committee hearing Thursday at the state’s capitol by its author — Rep. Carl Sherman.

“We all want to ensure that individuals are safe at home and this bill helps to do that,” said Sherman. “We have the right to protect our homes and to protect our loved ones from those intending to cause us harm. We all want to ensure that law enforcement officers have the trust and respect of their communities and that [as] citizens of this great state, we all have each other’s backs and we must respect the law.”

The bill named in honor of Botham Jean was killed Sept. 6, 2018 by then Dallas Police Department Officer Amber Guyger. She told officials that after working a nearly 14-hour shift she mistook Jean’s apartment, a floor below hers, as her own. She said she believed he was an intruder prompting the deadly shooting. When officers arrived on scene, they learned Botham was unarmed and eating ice cream while watching television. During her trial, attorney’s on her behalf introduced the Castle Doctrine and the mistake-of-fact defense to plead her innocence.

“It requires that the individuals be in their home or castle to invoke this type of defense,” said Sherman of House Bill 929. “Under this bill, an individual retains their right to defend themselves and their family in their habitation, vehicle, and place of employment. The Castle Doctrine should protect individuals who knew, or had reason to believe that lethal force was immediately necessary to defend their own castle.”

With terms like “investigation” used in the bill, the association described the language as “quite broad” adding that agencies with body cameras would have to wear them during the entirety of an investigation no matter how long it spans. Additionally, the potential of committing a third-degree felony, by turning off one’s body camera, caused concern for agencies as well. The financial cost to outfit agencies with equipment was also mentioned coupled with broadband access in rural communities.

“There is an unfunded fiscal impact to this to local agencies,” said Sheriff’s Association of Texas legislative law enforcement consultant Skylor Hearn. “If I have to maintain body camera activation, that means I need to increase the hardware I have with batteries and charging stations to make sure that if we have an investigation that runs multiple hours — if I’ve had it on most of my shift, and now I catch a homicide at the end of the shift, that’s going to run hours. I need to replace batteries. Plus, we have video storage that’s going to increase to some degree that would cost money.”

During the scope of an investigation, victims and witnesses’ ability to be videotaped unwillingly raised questions. Under Bo’s Law, any interviews could be subject to view in court. For Botham Jean’s parents, Allison and Bertram Jean, the bill brings about much need transparency.

“No doubt, I am in great support of this bill,” said Bertram Jean. “What led me to that [is] I believe it is a bill that will help law enforcement to create the changes that is necessary. I believe law enforcement is there to provide a service and to protect.”

Following her husband’s plea for the committee to review the bill, Allison Jean stepped to the podium.

“I stand in support of Bo’s Law,” she said. “While Bo’s Law is in Bo’s name, it doesn’t bring him back. But, it could certainly help another family. It could certainly assist in preventing the pain that we’ve been through as a result of Bo’s death.”

In the trial, it was discovered that Guyger was instructed to turn off her cameras to speak privately about the fatal incident sparking outrage due to loss of potential evidence in the case.

“As I read Bo’s Law, I believe some of the issues that came up during the trial will be corrected so that they cannot be used as a defense for what happened to my son,” she said. “And so I ask you committee members to consider the Bo’s Law and I wish Rep. Carl Sherman all the best in pursuing it.”

Tara Mitchell, with the National Rifle Association, said the organization preferred not to see “weakening or narrowing” of the Castle Doctrine by making the proposed changes in House Bill 929.

“The changes in the bill to sections 9.3-1 and 9.3-2 of the penal code alter the Castle Doctrine, the current Texas Castle Doctrine Law, to add a requirement to the presumption of reasonableness for the use of force or deadly force,” she said. “That the person acting in self-defense be physically present in their own habitation, vehicle or place of business.”

“The citizens of Texas, right now the way the law is written now, are not safe,” Berry said. “Texas is a rule of law state. House Bill 929 is a proposed bill that will make us all safe in our homes.”

“We are open to some of the suggestions that have been made…,” he said. “There are some ways people have read the bill that honestly to begin with I didn’t see it that way, but I understand where they are coming from.”

By the end of the hearing, House Bill 929 was left “pending” as members agreed that more work was needed to make sure everyone involved in Bo’s Law gets it right.

“This bill in no way, shape, form or fashion is meant to attack law enforcement [or] the law enforcement community and seeks to build that trust and transparency that so many of us agree is necessary,” said Sherman. “This bill simply amends and enhances four points of law that address the desire to remain safe in one’s home.”