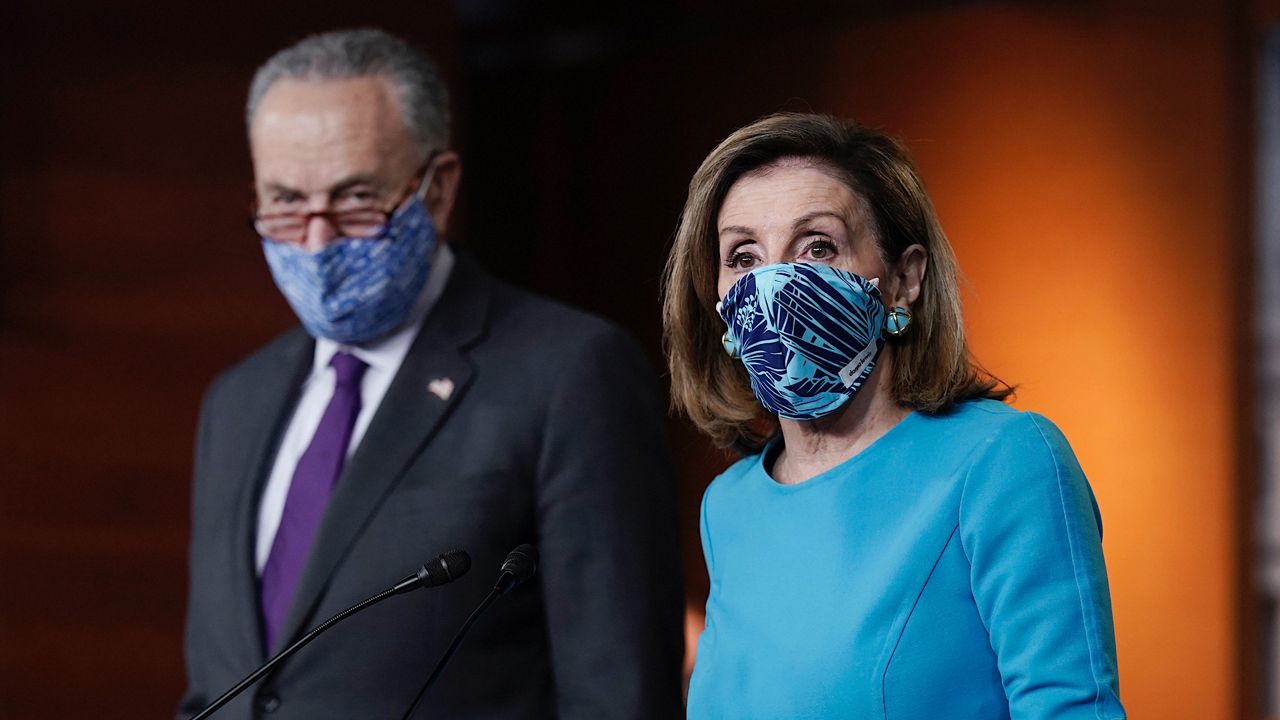 The House and Senate are returning to work this week — and with a full agenda on their plate, it couldn’t come a moment too soon.

Congress faces major questions on how to handle a wide range of issues with a razor-thin Democratic majority, with everything on the table from President Joe Biden’s $2 trillion infrastructure, jobs, and tax plan to gun control, immigration to hate crimes, and even a vote on adding a 51st state to the union.

No small feat for Senate Majority Leader Chuck Schumer (D-NY) and House Speaker Nancy Pelosi (D-CA), especially with the 2022 midterms on the horizon.

As with most major legislation, it will come with calls to abolish the filibuster, the 60-vote threshold needed to advance legislation in the Senate. Democratic Senate leadership faces major pressure from progressive lawmakers to abolish the practice to pass key legislation on voting rights and gun control, but moderates are not budging on their opposition scrapping the practice.

But Democrats do have one major tool in their arsenal: The opportunity to use budget reconciliation again, the same mechanism by which they passed the $1.9 trillion COVID-19 relief bill without a single vote of Republican support.

While they can’t use the process to pass just any piece of legislation — such as voting rights or gun reform legislation — it could be a possible path to pass the infrastructure bill.

Here’s some of what Congress has on the horizon as they return from recess:

A bipartisan group of lawmakers from the House and Senate are meeting with President Biden and Vice President Kamala Harris on Monday as the White House continues their push on passing the $2 trillion infrastructure measure.

The meeting comes as Republicans have criticized the measure on two fronts: Saying that more funding should go to traditional infrastructure rather than items like electric vehicle charging stations and addressing racial injustice on highways; and objecting to the corporate tax increase to pay for the bill.

Biden’s proposed corporate tax increase would raise the rate from 21% (his predecessor lowered the rate from 35% in 2017) to 28%, which would pay for the plan in 15 years, and then reduce deficits thereafter.

“This is a massive social welfare spending program combined with a massive tax increase on small-business job creators,” Sen. Roger Wicker (R-MS), one of the lawmakers who is attending the bipartisan meeting, said on ABC’s “This Week” on Sunday.

Mississippi, Wicker’s state, received a grade of D+, requiring $4.8 billion for drinking water, $289 million for schools, and nearly a quarter of households lack an internet subscription.

The highest grade went to Utah (C+), while the lowest went to the territory of Puerto Rico (D-).

Biden himself said that he is open to changes in how to fund the plan, but did not back down in calling for a large proposal.

“Debate is welcome, compromise is inevitable, changes are certain,” the president said. “In the next few weeks, the vice president and I will be meeting with Republicans and Democrats to hear from everyone, and we will be listening, we will be open to ideas and good-faith negotiations.”

Biden also said he is open to hearing alternative funding suggestions, with one notable exception: “I will not impose any tax increases on people making less than $400,000 a year.”

Speaker Pelosi hopes to have the infrastructure bill passed ahead of the August recess.

“I would hope that our part in that House would be largely done before the Fourth of July,” she said last week. “Whether the whole package can be done then, we just don’t know. But as some had suggested, we want to do it before the August break.”

But Transportation Secretary Pete Buttigieg said the White House has a different goal in mind, telling CNN Sunday that “the President wants to see major action in Congress and real progress by Memorial Day.”

“We’ve got some real kind of shot clocks on this in terms of things that have to get reauthorized by the end of September,” Buttigieg continued. “The sooner the better I think is the bottom line. We’ve got to get this done.”

On a near party-line 228-197 vote, with 9 Republicans joining Democrats in supporting the measure, lawmakers approved the American Dream and Promise Act, a bill offering legal status to around 2 million Dreamers, brought to the U.S. illegally as children, and hundreds of thousands of other migrants from a dozen troubled countries.

The House also passed the Farm Workforce Modernization Act in a more bipartisan 247-174 vote – the bill would protect undocumented farmworkers who meet certain requirements from being deported and also provide them with a path to residence.

Action on immigration comes as border officials encountered more than 172,000 people at the border in the month of March, according to new data released by U.S. Customs and Border Protection last week, the highest number recorded in more than 20 years and a 70% increase from February.

The Biden administration has continued to expel the majority of migrants who cross the border under a pandemic-related health order enacted by President Trump last year, including about 104,000 people expelled in March.

Republicans have chastised the Biden administration for not doing enough to address the migrant surge, but officials, including the president himself, have maintained that it is a seasonal surge.

“It happens every year,” Biden said. “Does anybody suggest that there was a 31% increase under Trump because he was a nice guy and he was doing good things at the border? That’s not the reason they’re coming.”

The administration has taken a number of actions to address the migration, including putting Vice President Kamala Harris in charge of the situation, as well as naming Tucson police chief Chris Magnus, a critic of Trump’s immigration policies, to lead Customs and Border Protection.

In the Senate, Dick Durbin (D-IL), the No. 2 Democrat in the chamber, has asked for more time to work with Republicans to find a bipartisan solution.

Last month, the House passed a pair of bills to expand background checks, the first major pieces of gun control legislation since Democrats retook the White House and the Senate.

H.R. 8, The Bipartisan Background Checks Act of 2021, which had several Republican co-sponsors in the House, would expand background checks for all firearm sales or transfers, including private transactions, which are currently not required under U.S. law. The measure passed 227-203 Thursday morning in bipartisan fashion, with 8 Republicans joining Democrats in supporting the bill.

The same day, the House passed H.R. 1446, The Enhanced Background Checks Act of 2021, which would close the so-called “Charleston Loophole,” which allows some gun sales to go through before a background check is completed. This bill passed 218-210, with slightly less enthusiastic bipartisan support – 2 Republicans joined Democrats in voting to support the measure, but 2 Democrats voted with Republicans against it.

Both bills face an uphill battle in a 50-50 Senate, but both the president and Democrats have expressed optimism in getting something passed in the wake of a spate of mass shootings in recent weeks, and years of inaction from Congress on gun control.

Sen. Chris Murphy (D-CT), a major gun control advocate who is leading the charge in the Senate, told “Meet the Press” that he believes “politics have shifted dramatically” in terms of gun control.

“I’ve gotten calls from GOP in Senate who don’t want to fight this fight any longer because the NRA’s authority is fading, the anti-gun violence movement’s impact is increasing,” he added. “I think we have a chance.”

“You are going to have to make some reasonable accommodations if you want 10 Republican votes, and I’m already talking to Republicans who are not unwilling to sit down at the table,” he added.

Pennsylvania Sen. Pat Toomey, a Republican who is retiring at the end of his term, also expressed optimism about getting background checks on public sales passed, but when it comes to private sales, “you are not going to get 60 votes with legislation that requires when a father wants to sell his gun to his son to have to get a background check.”

Still, Biden believes that “rational” gun control can pass in the Senate, and he will help reach across the aisle to get it passed. “It’s going to happen again,” he said, referencing the 1994 assault weapons ban that Biden helped pass when he was in the Senate.

Murphy is working with Senate Republicans to try and find a solution on background checks.

The Senate will vote this week on a bill proposed by Hawaii Sen. Mazie Hirono, which would address the rise in hate crimes against Asian Americans due to the COVID-19 pandemic.

The bill received strong support from President Joe Biden, who signed an executive order in his first week in office combatting racism, xenophobia and intolerance against Asian Americans and Pacific Islanders, and announced further actions on the matter in the wake of a deadly series of shootings in Georgia that killed 8, the majority of which were Asian women.

“I urge Congress to swiftly pass the COVID-19 Hate Crimes Act, which would expedite the federal government’s response to the rise of hate crimes exacerbated during the pandemic, support state and local governments to improve hate crimes reporting, and ensure that hate crimes information is more accessible to Asian American communities,” Biden said in a statement.

The House of Representatives will make moves this month to vote on making Washington, D.C., the 51st state, a measure that faces a steep uphill battle.

The move would give the over 700,000 residents of the District of Columbia representation in Congress, which they currently lack, but Republicans have condemned it as a “power grab” since the city overwhelmingly backs Democrats, and could potentially upset the balance of power in Congress.

But advocates say that D.C. residents should have a voice in Congress, especially since they are subject to federal taxes. The slogan “End Taxation Without Representation,” a common rallying cry for D.C. statehood that echoes the political slogan that started the American Revolution, even appears on the district’s license plates.

“Generations of Washingtonians have been denied the right to participate in our democracy – to have their voices and votes heard in Congress, to help shape the future of our nation, and to have a say on Supreme Court justices,” D.C. Mayor Muriel Bowser said in January. “It’s a promising sign that our country is finally ready to right this historic wrong.”

The District has a population larger than two U.S. states — Vermont and Wyoming — and all of the United States’ territories other than Puerto Rico.