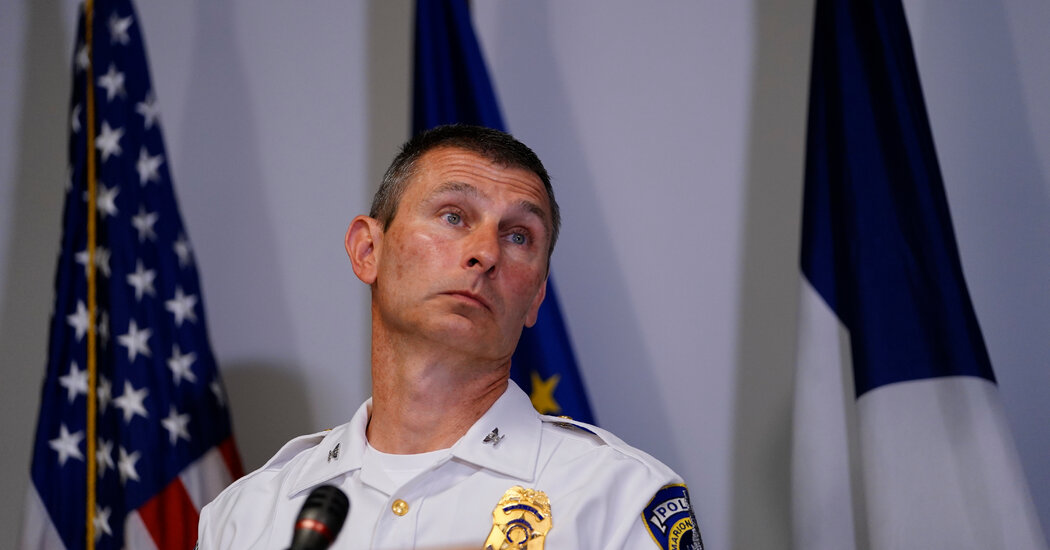 INDIANAPOLIS — The authorities were searching for a motive on Friday after a gunman stormed a FedEx facility in Indianapolis late Thursday, fatally shooting eight people and injuring at least seven others in a fast-moving, chaotic scene that emerged as the latest mass shooting to rock the nation in a matter of weeks.

The violence gave way to a day of grief and suspense, as families waited hours for answers about missing loved ones and reports emerged that the gunman was a former employee at the facility, which also has a large number of Sikh employees.

Families spent much of Friday in a painful limbo while the authorities combed through the crime scene and began the painstaking process of identifying victims and informing their loved ones. By early afternoon, bodies had begun to be removed from the facility.

A spokesman for FedEx confirmed that “the perpetrator was a former employee at the facility,” but few other details had emerged about the background of the gunman, a young man who officials believed was armed with a rifle and killed himself almost immediately after the shooting. The authorities said he arrived at the facility and started shooting abruptly, without an immediate confrontation.

The violence in Indianapolis comes only weeks after back-to-back mass shootings last month at spas in the Atlanta area and at a grocery store in Boulder, Colo., renewing pressure on Washington to address America’s deep-seated problems with gun violence and evoking both exhaustion and grief.

Officials used a common word — “another” — to define the tragedy. “This is another heartbreaking day, and I’m shaken by the mass shooting at the FedEx Ground facility in Indianapolis,” Gov. Eric Holcomb of Indiana said on Twitter. Mayor Joe Hogsett of Indianapolis condemned the “horrific news of yet another mass shooting, an act of violence that senselessly claimed the lives of eight of our neighbors.”

In a statement from the White House, where he ordered the flag lowered to half-staff, President Biden called the shooting “just the latest in a string of tragedies, following closely after gunmen firing bullets in broad daylight at spas in and around Atlanta, Ga., a grocery store in Boulder, Colo., a home in Rock Hill, S.C., and so many other shootings.”

“Gun violence is an epidemic in America,” Mr. Biden added, calling on Congress to approve gun control legislation. “We should not accept it. We must act.”

The authorities in Indianapolis had few updates at a news conference on Friday morning, but said the shooting was quick and abrupt. The F.B.I. special agent in charge of the Indianapolis Field Office, Paul Keenan, said it was too early to speculate on a motive.

After arriving at the warehouse, the gunman got out of his car and quickly started shooting in the parking lot, before entering the building and taking his life. “There was no confrontation with anyone who was there,” Chief McCartt said.

The Associated Press and NBC News, citing unnamed law enforcement sources, identified the suspect as 19-year-old Brandon Scott Hole. The A.P. said investigators were searching a home in Indianapolis associated with him, seizing evidence that included desktop computers and other electronic media.

The FedEx sorting facility where the shooting occurred is on the city’s southwest side, near the airport.

Chief Randal Taylor of the Indianapolis police said he had been told that the FedEx facility was staffed by a large number of Sikh employees. The executive director of the Sikh Coalition, Satjeet Kaur, said in a news release that “Sikh community members are among those injured and killed by the gunman in Indianapolis last night.”

Even as authorities promised a meticulous investigation, Mayor Hogsett said no further information could “restore the lives that are taken, or the peace that was shattered.”

“Nothing we learn can heal the wounds of those who escaped with their lives, but who will now bear the scars and endure the memories of this horrific crime,” he told reporters. “What we are left with this morning is grief — grief for the families of those killed, grief for the employees who have lost their co-workers, and grief for the many Americans struggling to understand how tragedies like this continue to occur again and again.”

The atmosphere was fraught at a nearby hotel as families of workers at the facility waited for word about loved ones, many of whom were not allowed to have their cellphones at work, complicating the effort. The number of families waiting dwindled as the day went on, and the mayor visited with those remaining.

One woman, who arrived at the hotel early Friday morning, cried, “Thank you, Jesus! Thank you, Lord!” when she found out her family member was safe.

The police said early Friday that five of the injured people had been hospitalized with gunshot or shrapnel wounds, including one in critical condition who was expected to survive. Two others were treated at the scene and released.