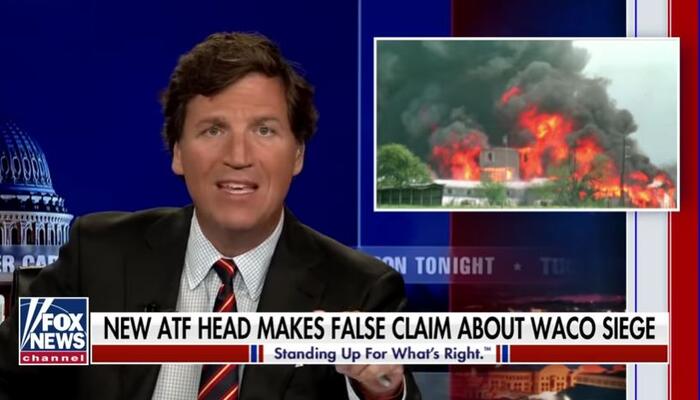 The Second Amendment was left unmentioned in the long investigation about gun rights, typical for the press in an age when the mainstream media and the left have hypocritically embraced law-and-order surveillance agencies like the FBI in the fight against Donald Trump.

The report by Glenn Thrush, Danny Hakim, and Mike McIntire almost ignored one enormous reason for conservative hostility toward the agency: The 1993 joint ATF/FBI siege of the religious compound of David Koresh in Waco, Texas whose irresponsible final raid after a 51-day standoff resulted in a fire where over 50 people died, 20 of them children.

First, the National Rifle Association (NRA) was held responsible for floors caving in at the ATF.

If there was one moment that summed up the current state of the Bureau of Alcohol, Tobacco, Firearms and Explosives, it was when the floor at the agency’s gun-tracing center caved in a couple of years ago under the weight of paper.

The accident was not entirely accidental.

The gun lobby, led by the National Rifle Association, has for years systematically blocked plans to modernize the agency’s paper-based weapons-tracing system with a searchable database. As a result, records of gun sales going back decades are stored in boxes stacked seven high, waiting to be processed, against every wall.

Now the long-suffering A.T.F. (somehow the “explosives” never made it into the abbreviation) is at the center of President Biden’s plans to push back at what he has called “the international embarrassment” of gun violence in America.

The Times‘ front-page insistence that a law-and-order government agency have its power strengthened comes courtesy of the same paper who shrugged off left-wing calls to “defund the police” in the name of racial justice.

To say the A.T.F. is outgunned is an understatement. Staffing levels have remained essentially flat for two decades, with the number of inspectors who are responsible for overseeing gun dealers actually decreasing by about 20 percent since 2001. The number of firearms sold over the same period has skyrocketed: over 23 million guns in 2020, shattering the previous record of 15.7 million in 2016.

The deadly Clinton-era conflagration at Waco was dealt with in a single paragraph, with no sympathy for the innocents who died during the raid of David Koresh’s religious compound in Waco, Texas in April 1993:

The bureau only grew as an object of loathing among many gun owners. In 1993, its agents raided the Branch Davidian compound in Waco, Texas, in an ill-prepared operation against a religious sect that had been stockpiling weapons. Four agents and six sect members died, and a long siege followed, ending with an F.B.I.-led assault weeks later that left more than 70 dead. The A.T.F.’s image never fully recovered.

Far more sympathy was recently show in the Times for a similar failure from 1985, when the city of Philadelphia tried to drive out the radical black MOVE, which had made terrorist threats against local leaders. An April 24 Times article oozed with sympathy while whitewashing MOVE’s radicalism:

In the early evening of May 13, 1985, the police flew a helicopter over a crowded West Philadelphia neighborhood and dropped a bomb on the rowhouse where members of the communal, anti-government group MOVE lived….The bombing has for decades been held up as an example of the city’s mistreatment of Black people….“It remains a festering injustice because there was no accountability for those who dropped the bomb,” said Linn Washington, a journalism professor at Temple University who covered the bombing as a reporter.

Was there no need for “accountability” for the ATF after Waco?