RESTAURANTS CALL ON LAWMAKERS TO REPLENISH AID PROGRAM: Less than a day after the Small Business Administration said the first recipients of grants to help the nation’s battered restaurants should begin seeing money in their bank accounts, the industry’s top lobbyist warned that the initial pot of cash is already in need of replenishment.

— “We now have a clear picture of how much need there is for this funding,” the National Restaurant Association’s Sean Kennedy said in a statement, citing immense demand for the Restaurant Revitalization Fund — 266,000 applicants have requested $65 billion worth of aid from the $28.6 billion fund, SBA Administrator Isabel Guzman said today.

— “We continue to urge policymakers in Washington — from the White House to Capitol Hill — to replenish the RRF to maximize relief for small independent and franchise restaurant operators,” Kennedy added, while praising the work SBA had done to get the grant program off the ground so quickly. “Americans can’t wait to get back into their favorite restaurant with their family and friends, and the federal government can play a key role in making that a reality.”

— The group is also trying to gin up grassroots support for more funding for the program, warning in a petition drive that demand for the program means that “at this rate, the SBA will run out after the first two days of applications. And that means hundreds of thousands of restaurants, bars, food trucks, and everything in between will be left waiting.”

CANOPY ADDS DNC FUNDRAISER: Canadian cannabis giant Canopy Growth has tapped Foxhall Parker to be its director of U.S. government relations as the industry continues to build up its footprint in Washington. He was most recently finance director for the mid-Atlantic at the DNC, where he led business outreach.

— Parker will assist Canopy with legalization and reform efforts at the state and federal levels, he said in an interview while working with the U.S. Cannabis Council, the newly formed industry coalition that Canopy is a member of. The momentum surrounding various marijuana issues “was an opportunity that I really couldn’t pass up,” he told PI.

Good afternoon and welcome to PI. Here’s a job that maybe would’ve been nice to have filled before now. Send K Street tips: [email protected]. And be sure to follow me on Twitter: @caitlinoprysko.

At Emergent, we make things you never thought you’d need — until you do. Until you need to counteract an opioid overdose. Or need protection against smallpox, anthrax, cholera, or botulism. And now, we’re in the fight against COVID-19. At Emergent, we take on public health challenges. In facilities, we work to help protect public health. And that’s why We Go.

HAS ANYTHING CHANGED ON INFRASTRUCTURE? “Republican leaders told President Joe Biden on Wednesday that they will draw a hard line on raising taxes to pay for infrastructure, demonstrating the substantial challenges ahead for a potential bipartisan deal on Biden’s infrastructure and jobs plan,” POLITICO’s Burgess Everett, Sarah Ferris and Laura Barrón-López report.

— “Democrats and Republicans left the meeting saying they would try to zero in on areas of agreement they could reach on a bipartisan bill. In reality, they sound like they are starting from scratch. GOP leaders told reporters that they still had to reach an agreement with Democrats over what exactly meets the definition of infrastructure.”

NRA BANKRUPTCY CASE DISMISSED: “A federal judge Tuesday denied an effort by the National Rifle Association to file for bankruptcy protection, ruling that the gun rights group filed the case in an attempt to fend off a lawsuit by the New York attorney general,” The Washington Post’s Tom Hamburger reports.

— In a 37-page decision, Judge Harlin Hale ruled that the gun lobby’s bankruptcy petition “was not filed in good faith but instead was filed as an effort to gain an unfair litigation advantage in the NYAG Enforcement Action and as an effort to avoid a regulatory scheme.” The ruling dealt a major blow to NRA chief Wayne LaPierre, who sought to move the nonprofit to Texas as a result of New York’s lawsuit, which LaPierre decried as a political maneuver.

— “Hale’s decision follows a weeks-long hearing that revealed details about alleged mismanagement and excessive spending by top officials at the influential gun lobby, including LaPierre, the NRA’s controversial leader for the past three decades.” The judge cited “‘lingering issues of secrecy and a lack of transparency’ in the management of the nonprofit. But he said he was most troubled by ‘the surreptitious manner in which Mr. LaPierre obtained and exercised authority to file bankruptcy for the NRA,’ noting that the NRA chief had not informed the majority of the board of directors, the chief financial officer or the general counsel.”

— Still, Hale “declined to appoint a trustee or independent examiner to oversee the group’s finances, saying that testimony during the hearing suggested the organization had improved its internal controls and ‘that the NRA now understands the importance of compliance.’”

WHO’S LOBBYING ON COVID WORKER PROTECTIONS: “A swarm of the most powerful lobbyists in Washington is circling as the White House reviews long-anticipated rules to protect workers from COVID-19 — with meatpacking, hospital and retail industries working to delay the regulations while unions push for more urgency,” Roll Call’s Emily Kopp reports.

— “The Office of Information and Regulatory Affairs within the White House’s Office of Management and Budget is reviewing the rules and will take more than two dozen meetings with interest groups over the course of three weeks.”

CORPORATE AMERICA’S LOBBYISTS KEEP CASH FLOWING TO ELECTION OBJECTORS: “Lobbyists keep donating to members of Congress even after companies employing them cut off cash to protest the Capitol insurrection and 2020 election challenge,” Axios’ Lachlan Markay reports. “While the companies have gotten a PR boost for their good-governance statements, the policy advocates they employ have maintained relationships on their behalf and can still advance their goals on the Hill with the very members those companies disavowed.”

— “Data provided by the Center for Responsive Politics shows that 124 lobbyists for companies that cut off objector donations after Jan. 6 made nearly 300 contributions — totaling nearly $300,000 — to those same 147 members,” though, of course, major companies sometimes retain dozens of lobbyists, who are frequent political contributors in their personal capacities and donate to members of both parties.

— Waldo McMillan is now leading Cisco’s D.C. office. He was most recently vice president of legislative affairs for Charter Communications and is a Harry Reid alum.

— Sylvester Giustino is now senior director of federal and state government relations at the Commercial Vehicle Training Association. He most recently was deputy director of the office of public liaison at the Labor Department.

— Joby Young has joined the consultancy Horizons Global Solutions. He most recently served as chief of staff to former Agriculture Secretary Sonny Perdue and is an Austin Scott, House Agriculture and House Armed Services alum.

— Joel Miller is joining the Information Technology Industry Council as senior director of policy for telecommunications. He was most recently chief of staff and senior legal adviser at the FCC for Commissioner Michael O’Rielly. 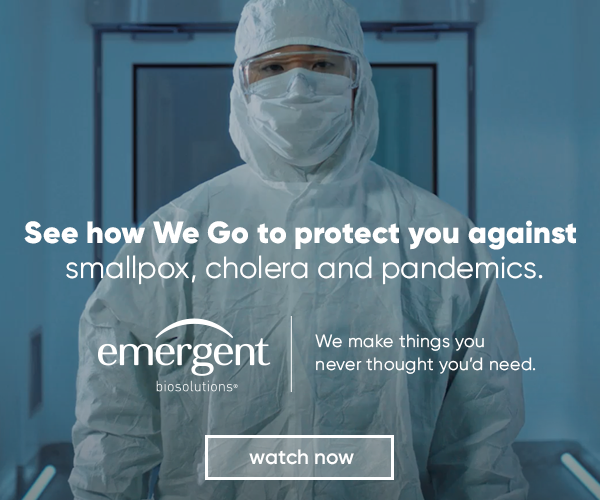 At Emergent, we make things you never thought you’d need — until you do. Until you need to counteract an opioid overdose. Or need protection against smallpox, anthrax, cholera, or botulism … and even in the fight against global pandemics like COVID-19. At Emergent, we take on public health challenges. For over 20 years, we have produced therapies and vaccines to help protect public health. And that’s why We Go.