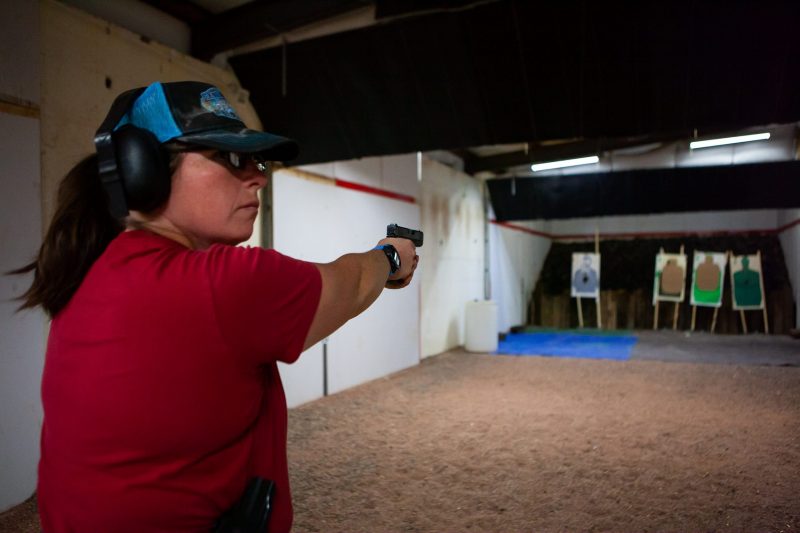 In the aftermath of the August 2019 shooting that left 23 people in El Paso dead, area lawmakers were cautiously optimistic that the rampage, one of the worst in Texas history, would spur Texas Republicans to take action on gun control.

But as the current legislative session in Austin winds down it’s clear that state leaders instead moved in the opposite direction as a bill that would allow Texans to carry a firearm in public without a license is almost on its way to Gov. Greg Abbott’s desk.

House Bill 1927, by state Rep. Matt Schaefer, R-Tyler, would permit anyone 21 years or older to carry a firearm — either openly or concealed — without first obtaining a license. The bill would not apply to a person already federally prohibited from owning or carrying a gun, but critics say that measure would be difficult to enforce without the licensing requirement.

“I was promised that we would take gun safety seriously in this state. I sat in rooms and talked to people. Talked to people, the Anchondos, who lost two family members that day and who, by the way, forgave the shooter,” he said, referring to the young couple who died shielding their baby from the shooter. “(The family) forgave him through their own Christian faith. They said I cannot hate you for what you did. I forgive you for what you did to our family. They sat there and they told us that and I could not comprehend their mercy.”

Moody said all the Anchondos wanted was something better to come out of the tragedy.

“All they wanted was some accountability, yet here we are. I get it. There’s nothing I can do. I can’t stop this. I know the rules of the House very well,” he said. “This is about to pass, but I couldn’t stop tonight without sharing my disappointment knowing what I heard in those (rooms) when the doors were closed. I heard lots of promises. I haven’t heard (them) since.”

Moody also cautioned that a tragedy like the one that occured in El Paso will likely occur in other communities.

“I pray that it doesn’t, but it is. I wish it wasn’t, but it will,” he said. “When we leave this floor in a few days I’m going to ask the speaker for permission to introduce the names of the people we lost in El Paso and speak in their memory because it’ll be the last time that any of you ever hear their names, but it’ll never be the last time I ever think about their names.”

State Sen. Cesar Blanco, D-El Paso, who introduced five amendments to the bill, said he doesn’t support the bill because it doesn’t make Texas communities safer. All of Blanco’s amendments were rejected.

“Our top priority as elected officials, from my perspective, is to keep our people safe in the state,” Blanco said.

Blanco served on the governor’s bipartisan Texas Safety Commission, which met following the mass shooting at the El Paso Walmart where a white supremacist allegedy killed 23 people in what authorities have described as a racially motivated attack. Less than a month later, a mass shooting in the Midland-Odessa area left eight people dead and 22 others injured.

In the aftermath of both shootings, Abbott appeared somewhat open to new gun laws. But he indicated weeks ago he would sign the permitless carry bill and reaffirmed his support for the National Rifle Association and its plans to relocate its national headquarters to Texas.

Blanco said the safety commission was tasked with developing an immediate action plan that included strategies to fight the rise of extremist groups, hateful ideologies and ways to keep guns out of the hands of dangerous individuals.

Four of the five amendments he proposed were based on the discussions from the commission meetings, he said.

“Frankly, I was disappointed that all those amendments to keep guns out of the hands of criminals failed along party lines,” Blanco said.

After the shooting, U.S. Rep. Veronica Escobar, D-El Paso, exorciated Abbott for blaming the attack on mental illness instead of Texas’ gun laws. Last week she made clear her frustration hasn’t subsided.

“After the August 3 attack on El Paso, Governor Greg Abbott promised victims that he would take action against gun violence. By signaling he will sign the permitless carry bill, Governor Abbott is proving he is neither a man of his word nor a leader with courage,” Escobar said in an emailed statement to El Paso Matters. “The permitless carry bill is a betrayal of victims and survivors of attacks across our state. Despite overwhelming support for common-sense gun violence prevention legislation like universal background checks, it’s clear that Texas Republicans, led by a cowardly governor, are more interested in groveling for the gun lobby’s attention than they are in preventing more violence. They have no shame.”

Blanco did pass one reform bill he proposed. The “Lie and Try” bill makes it a criminal offense to lie on a background check form to illegally purchase a firearm. The bill, SB 162, is awaiting Abbott’s signature.

Blanco said that despite the success he had with that proposal, more needs to be done.

“Sometimes the Texas Legislature moves slower than public sentiment. Gun violence is a public health crisis. We have to keep working to make sure we’re making reforms,” Blanco said.

Lawmakers reached a compromise last week which kept some changes the Senate tacked on to the bill. They include a provision that l allows police officers to question someone based only on their possession of a handgun, increasing the criminal penalty for a felon caught carrying a gun to a second-degree felony punishable by at least five years in prison, and a requirement that the Texas Department of Public Safety offer a free online course on gun safety.

Some El Pasol business owners who offer license to carry courses — which won’t be required after the bill is signed into law — had different opinions on the legislation. But not one is concerned about a loss of income if the courses are no longer mandated by the state.

Ben Cheng, owner of El Paso Concealed Carry, supports the bill and said his business is not solely reliant on the licensing classes.

“I teach seven other firearms (and) self-defense related classes. So this is just one of the many,” he said. “If the bill is passed, the demand certainly will drop, but other (safety) classes — that demand may pick up.”

Cheng said new gun owners should take it upon themselves to learn about gun safety.

“Whether you buy a gun or go to Home Depot and buy a chainsaw, all these are dangerous tools. It’s incumbent upon yourself to be able to learn how to safely handle these tools,” Cheng said. “I really think people need to really use common sense, in the sense that whether you are driving a car, or (you) go out and buy the power tool, or having a gun — these are all dangerous tools.”

Tom Fenton, founder of El Paso Inc. and owner of El Paso Carry, said he thinks the bill is a bad idea. He said he hopes that those considering purchasing a weapon will educate themselves on how to use them despite not being required by the state if the bill passes.

Fenton said some people do not understand the implications and responsibilities of using and owning a weapon.

“Seeing someone openly carrying a holstered handgun, in and of itself, should not be cause for alarm,” Carrillo said in emailed responses to El Paso Matters.

Carrillo said that while legal in public, entry into certain establishments and venues can be restricted to those carrying firearms if notice is posted as prescribed by statute.

Like Cheng, the gun-safety instructor, Carrillo urged current and future gun owners to practice some common sense, such as alerting officers if they have a weapon.

“Officers are very cognizant of the fact that in any encounter and citizen interaction the presence of weapons, including firearms, is always a possibility,” he said. “If anyone has occasion to interact with an officer for any reason, persons should refrain from actions that could possibly be misconstrued like ‘suddenly or furtively’ reaching for their gun.”

Cover photo: Jamie Mogzer listens to instructions from Ben Cheng, owner of El Paso License to Carry, as she works on her marksmanship during a class on Sunday. Mogzer wants to improve her skills for self-defense. (Corrie Boudreaux/El Paso Matters)