A bill that will allow Texans to carry concealed handguns without any permit – or the background check and training that come with it – passed the state’s legislature on Monday and headed to the desk of the governor, who has promised to sign it.

When Governor Greg Abbott signs the measure into law, Texas will become the 21st state, and the most populous, in the United States to have some form of permitless concealed carry, according to the National Rifle Association.

Texas already has some of the loosest gun laws in the country and has more than 1.6 million handgun license holders.

Rep Matt Schaefer, a Republican who authored the bill, which gun rights advocates refer to as a ‘constitutional carry’ law, had earlier called it the ‘strongest Second Amendment legislation in Texas history’.

The bill protects ‘the right of law-abiding Texans to carry a handgun as they exercise their God-given right to self-defense and the defense of their families,’ Schaefer wrote on Twitter.

Rep Chris Turner, a Democrat, who’s been a vocal opponent of the bill, noted this is the first legislative session since the August 2019 mass shootings in El Paso and Odessa that left 30 people dead and dozens more wounded, including two police officers.

‘I can’t imagine a worse slap in the face to all those people who have advocated, to the victims and to the family of those victims,’ Turner said. 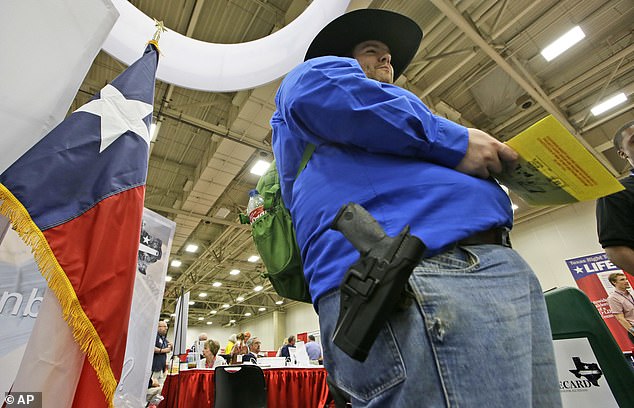 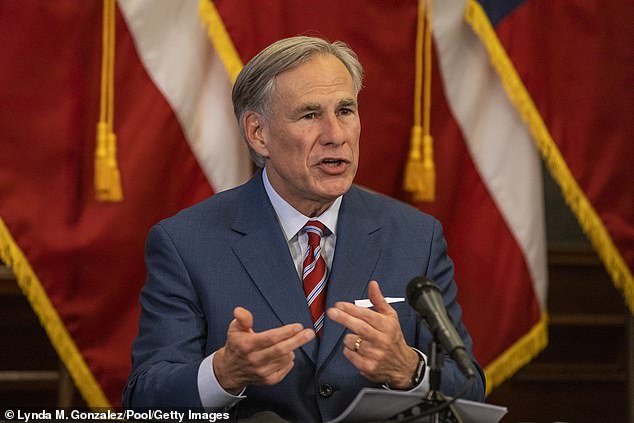 The bill that passed includes compromises that address concerns of the law enforcement community, including getting rid of language that would have prevented a police officer from questioning a suspect based solely on the fact that they were carrying a gun.

Everytown for Gun Safety, an advocacy group that works for tougher gun regulations across the US, blasted the bill.

‘These representatives have abandoned their oaths of office to represent our interests,’ said Elizabeth Hanks, a volunteer for Moms Demand Action, the grassroots wing of Everytown, in a written statement.

‘We’re putting them on notice – we’ll stop at nothing to make sure Texas voters know just how much danger these representatives have put them in,’ she added.

Opinion about gun control laws in Texas is split, as evidenced by polls done by the Texas Politics Project, which published its April 2021 results to the question: ‘Do you think gun control laws should be made more strict, less strict or left as they are now?’

Many of the state’s law enforcement opposed the bill.

Interim Austin Police Chief Joe Chacon was joined at the end of April by other police chiefs and police advocates outside the Texas Capitol to dissuade Texas from passing the bill.

He said officers currently assume that if they see a person openly carrying a firearm, that person has gone through the process to obtain a license, the Austin-American Statesman reported.

‘When you strip that away and take away those safeguards or guardrails, per se, it’s going to make it more difficult for officers to make those kinds of assumptions and judgments,’ he said. 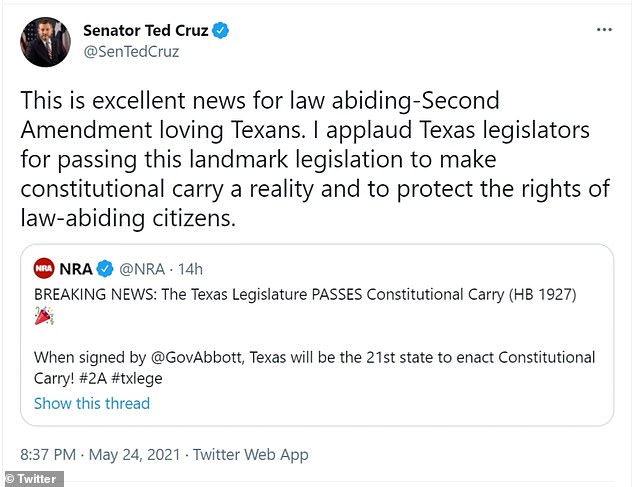 Sen Ted Cruz, a Republican, applauded the bill’s passage in a tweet on Monday 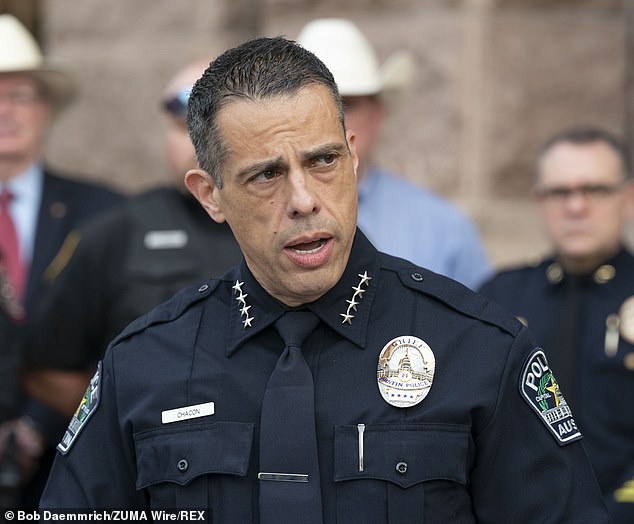 Fort Worth Police Chief Neil Noakes also opposed the bill and sent a letter to the Texas Senate, saying the department does ‘not support any legislation that would allow the carrying of a handgun in a public place without a license or permit.’

‘Such action would remove crucial safeguards that are meant to protect Texans.’

But Tarrant County Sheriff Bill Waybourn expressed his support for the legislation, telling The Star Telegram, ‘I would have never offered this bill if I thought it would in any way put Texans in harm or diminish law enforcement’s ability to enforce the law..’

The bill’s passage stirred critics who took to Twitter to bash the Texas state legislature for passing it and pushing Abbot not to sign it.

One Twitter user said, ‘Texas is one bill away from making it totally okay to kill someone as long as it’s with a gun. They’re two bills away from making shooting people dead the only way you can graduate from high school.’

Another Twitter user said sarcastically cheered for the bill saying, ‘YEAH WOOOO MORE GUNS FOR EVERYONE HERE IN TEXAS!!!! no.

‘you’ll see, morons with their new guns will roam freely and kill anyone they feel like. this is a stupid bill, and you’ll see the major consequences.’ 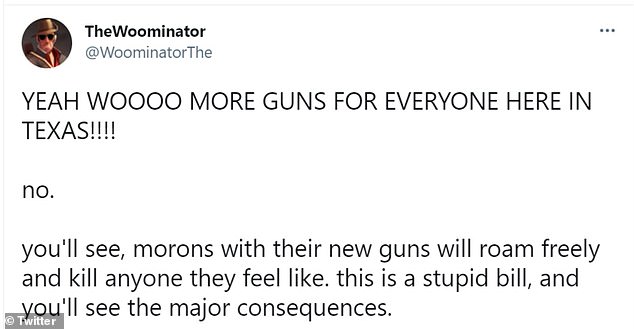 Guns have been the center of a national surge in crime.

The 12 deadly mass shootings over the weekend brought the total of US gun fatalities to 7,500 since the start of the year.

‘I would say certainly there is a guns problem,’ said Psaki, rejecting the premise of the question.

‘And that’s something the president would say, and there are communities where local violence and community violence is an issue,’ she continued, citing funding for anti-violence programs.

President Joe Biden has been on a crusade to enforce stricter gun laws in an effort to end to mass shootings.

‘I continue, and I strongly, strongly urge my Republican friends in the Congress who have refused to bring up the House passed bill to bring it up now,’ he said.

The Justice Department, within 30 days, will issue a proposed rule to help stop the proliferation of ‘ghost guns.’

We are experiencing a growing problem: criminals are buying kits containing nearly all of the components and directions for finishing a firearm within as little as 30 minutes and using these firearms to commit crimes. When these firearms turn up at crime scenes, they often cannot be traced by law enforcement due to the lack of a serial number. The Justice Department will issue a proposed rule to help stop the proliferation of these firearms.

The Justice Department, within 60 days, will issue a proposed rule to make clear when a device marketed as a stabilizing brace effectively turns a pistol into a short-barreled rifle subject to the requirements of the National Firearms Act.

The alleged shooter in the Boulder tragedy last month appears to have used a pistol with an arm brace, which can make a firearm more stable and accurate while still being concealable.

The Justice Department, within 60 days, will publish model ‘red flag’ legislation for states

Red flag laws allow family members or law enforcement to petition for a court order temporarily barring people in crisis from accessing firearms if they present a danger to themselves or others. The President urges Congress to pass an appropriate national ‘red flag’ law, as well as legislation incentivizing states to pass ‘red flag’ laws of their own. In the interim, the Justice Department’s published model legislation will make it easier for states that want to adopt red flag laws to do so.

The Administration is investing in evidence-based community violence interventions

The Justice Department will issue an annual report on firearms trafficking