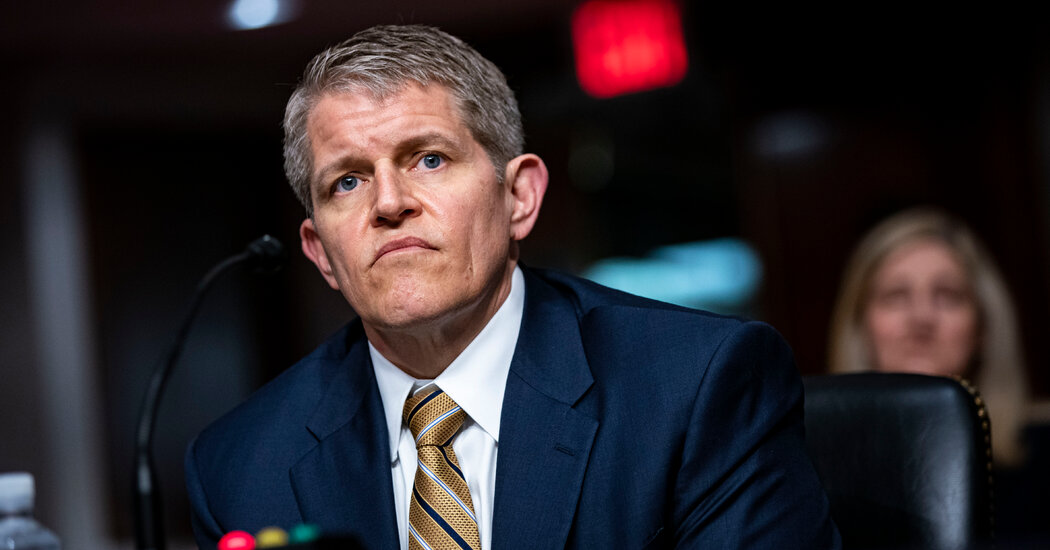 President Biden tapped David Chipman to lead the Bureau of Alcohol, Tobacco, Firearms and Explosives in part because the two-decade bureau veteran has few qualms about taking on the gun lobby in blunt, confrontational and unapologetic terms.

On Wednesday, Republicans on the Senate Judiciary Committee seized on Mr. Chipman’s scathing comments — including an interview in which he likened the frenzied buying of weapons during the pandemic to “zombie apocalypses” — in hopes of sinking his nomination.

“Many see that putting a committed gun control proponent, like David Chipman, in charge of A.T.F. is like putting a tobacco executive in charge of the Department of Health and Human Services, or antifa in charge of the Portland police department,” Senator Charles E. Grassley of Iowa, the top Republican on the panel, said during Mr. Chipman’s confirmation hearing.

The selection of Mr. Chipman to lead the federal agency tasked with enforcing the nation’s gun laws and regulations is no run-of-the-mill personnel move, as the amped-up rhetoric of Mr. Grassley and other conservatives vividly illustrated.

The bureau has emerged as a cornerstone of the Biden administration’s response to gun violence sweeping the country, an improvised policy increasingly reliant on executive action as Congress debates bills to expand background checks and impose new restrictions on assault rifles.

If confirmed, Mr. Chipman would become only the second permanent director of the A.T.F. since the position became subject to Senate confirmation 15 years ago. He would inherit an agency seriously depleted by the National Rifle Association’s campaign to undermine the bureau and hobble its core law enforcement and regulatory functions.

News alerts of a shooting in San Jose, Calif., that killed at least eight people began pinging on senators’ phones moments into the hearing, if lawmakers needed any reminder of how high the stakes were.

“It is not lost on me that there is another mass shooting,” said Senator Amy Klobuchar, Democrat of Minnesota.

Mr. Chipman spent over 20 years in the A.T.F. as a special agent, serving in the bureau’s Detroit field office and Washington headquarters. Over the last few years, he has worked as a consultant to gun control organizations founded by former Representative Gabrielle Giffords and Michael R. Bloomberg, the former mayor of New York.

On Wednesday, Mr. Chipman reiterated his support for universal background checks and restrictions on assault rifles, while pledging to bolster the bureau’s underfunded gun trafficking and inspection units.

Republicans, who view an empowered A.T.F. as a threat to the Second Amendment rights of gun owners, countered by portraying Mr. Chipman as a zealot, peppering him with questions about his past statements.

Senator Mike Lee, Republican of Utah, grilled Mr. Chipman for saying in jest in an interview last year that some first-time gun buyers were preparing “for end-times scenarios and zombie apocalypses.”

Mr. Chipman, who struggled to avoid extended back-and-forth arguments with Republicans, responded by saying that he had been trying to spotlight the unnecessary hoarding of guns and called his remarks “self-deprecating.”

He also deflected questions about his progressive policy advocacy — refusing, for instance, to offer a definition for an assault weapon — repeatedly saying he viewed himself as “a cop,” not as a lawyer or a lawmaker.

Senator Ted Cruz, Republican of Texas, questioned Mr. Chipman on whether he would support a ban on AR-15-type weapons, which he said were among the “most popular” guns in the country.

“With respect to the AR-15, I support a ban,” Mr. Chipman said, adding that Mr. Biden had already expressed support for a Democratic bill to restrict the sales of such guns.

The answer did not satisfy Mr. Cruz. But Mr. Chipman tried to defuse the tension by thanking him for “offering me a Dr Pepper” during a meeting in the senator’s office the day before.

The N.R.A. has mounted a coordinated campaign to sink Mr. Chipman’s nomination. And over the years, the gun lobby has essentially exercised veto power over the appointment of permanent leadership at the bureau, blocking several would-be directors, including a conservative police union official chosen for the post by President Donald J. Trump.

Mr. Biden’s selection of Mr. Chipman came after an intense lobbying campaign by gun safety organizations, led by Ms. Giffords, Mr. Bloomberg and other gun control activists who identified him as their top choice for the job soon after November’s election.

The White House was initially reluctant to select a nominee who would provoke such intense opposition, but Mr. Biden decided he needed to make a bold move after the mass killings in the Atlanta area and Boulder this year, White House officials said.

The confirmation of Mr. Chipman is not assured. White House officials believe that he has just enough votes — 50 to 52 in their estimate, with Vice President Kamala Harris as a tiebreaker if needed — to overcome near-unanimous opposition by Republicans.

It is not even clear if Democrats have the votes necessary to clear him out of the committee without resorting to procedural maneuvers.

But two critical Democratic swing votes, Senators Joe Manchin III of West Virginia and Kyrsten Sinema of Arizona, have told Democratic leaders that they are likely to support his nomination, provided the hearings go well. Two Republicans, Senators Susan Collins of Maine and Patrick J. Toomey of Pennsylvania, have not ruled out supporting him.

If not especially sweet, Mr. Chipman’s hearing on Wednesday was, at least, short.

Committee Democrats crammed in his hearing with four other nominees — limiting the amount of time any senator could question Mr. Chipman. The format also forced Republicans to break off attacks if they wanted to query the other nominees, who included Mr. Biden’s picks to lead the Drug Enforcement Administration and the criminal division of the Justice Department.

As a result, Mr. Chipman spent relatively little time addressing specific steps he might take if confirmed. One exception: He vowed to “get to the bottom” of the significant drop-off in inspections of gun dealers in 2020, which A.T.F. officials have attributed to the difficulties of conducting operations during the pandemic.

But the hearing was itself redefined by the same kind of numbing outrage that prodded Mr. Biden to pick Mr. Chipman in the first place, a mass shooting.

“If I’m confirmed as A.T.F. director, one of our priorities at A.T.F. will be focusing on gun trafficking, the unlawful transfer of legal guns to criminals, and perhaps in this case a crime like this could be prevented,” Mr. Chipman said when asked to comment on the carnage in San Jose.