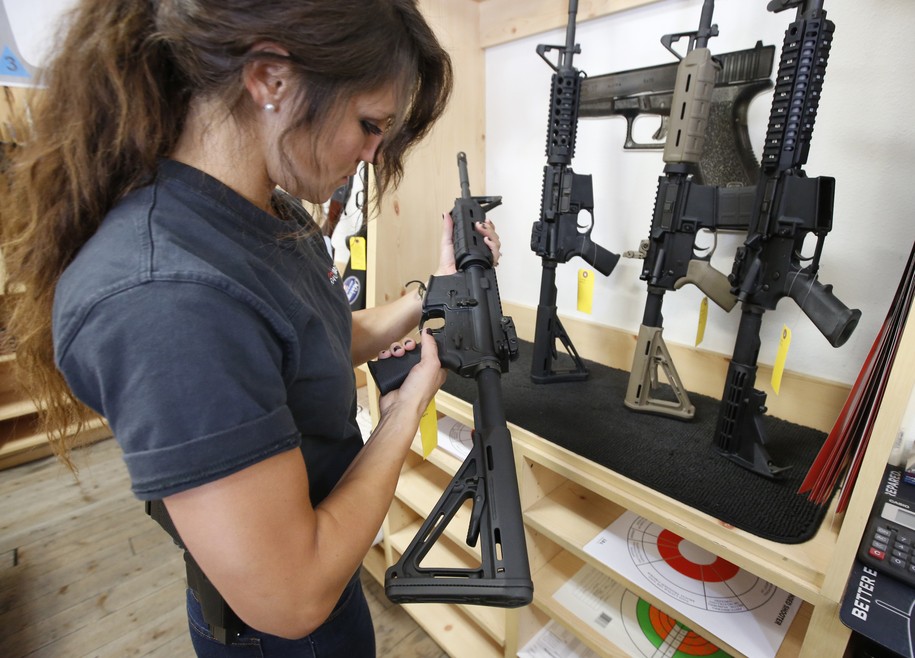 According to the ruling by U.S. District Judge Roger Benitez of San Diego, the assault weapons ban deprives Californians from owning assault-style weapons commonly allowed in other states. Benitez issued a permanent injunction Friday so the law cannot be enforced.

Sure, Roger. And these were all “ordinary” incidents:

That tweet, featuring some of the worst mass shootings in U.S. history, went viral in March; Politifact rated it as “mostly true.” The one “possible” exception Politifact noted was the gun used in the June 12, 2016, Orlando Pulse nightclub shooting. The Bureau of Alcohol, Tobacco, and Firearms considered it a “.223 caliber AR type rifle.”

Despite mountains of evidence that assault rifles are the weapons of choice among mass killers, Benitez, a George W. Bush appointee, also stated, “One is to be forgiven if one is persuaded by news media and others that the nation is awash with murderous AR-15 assault rifles. The facts, however, do not support this hyperbole, and facts matter.”

Facts do matter. And so do the bodies piling up like cordwood.

And, honestly, despite the continual invocation of the “self-defense” canard, it’s difficult to understand what a menaced citizen can do with an AR-15 that he or she couldn’t do with a handgun, a can of mace, or a marginally well-trained badger. I’m not sure why everyone has to run around 24/7 like they’re Narcos extras.

Unfortunately, conservatives have been pushing a crank interpretation of the Second Amendment for decades now—and they’ve largely succeeded in mainstreaming their wobbly rationalizations.

Many are startled to learn that the U.S. Supreme Court didn’t rule that the Second Amendment guarantees an individual’s right to own a gun until 2008, when District of Columbia v. Heller struck down the capital’s law effectively banning handguns in the home. In fact, every other time the court had ruled previously, it had ruled otherwise. Why such a head-snapping turnaround? Don’t look for answers in dusty law books or the arcane reaches of theory.

So how does legal change happen in America? We’ve seen some remarkably successful drives in recent years—think of the push for marriage equality, or to undo campaign finance laws. Law students might be taught that the court is moved by powerhouse legal arguments or subtle shifts in doctrine. The National Rifle Association’s long crusade to bring its interpretation of the Constitution into the mainstream teaches a different lesson: Constitutional change is the product of public argument and political maneuvering. The pro-gun movement may have started with scholarship, but then it targeted public opinion and shifted the organs of government. By the time the issue reached the Supreme Court, the desired new doctrine fell like a ripe apple from a tree.

Molding public opinion is the most important factor. Abraham Lincoln, debating slavery, said in 1858, “Public sentiment is everything. With public sentiment, nothing can fail; without it, nothing can succeed. Consequently he who molds public sentiment goes deeper than he who enacts statutes or pronounces decisions. He makes statutes and decisions possible or impossible to be executed.” The triumph of gun rights reminds us today: If you want to win in the court of law, first win in the court of public opinion.

BURGER: “If I were writing the Bill of Rights now, there wouldn’t be any such thing as a Second Amendment. … This has been the subject of one of the greatest pieces of fraud—I repeat the word fraud—on the American public by special interest groups that I have ever seen in my lifetime. Now just look at those words. There are only three lines to that amendment. ‘A well-regulated militia.’ If a militia, which was going to be the state army, was going to be well regulated, why shouldn’t 16 and 17 and 18 or any other aged persons be regulated in the use of arms the way an automobile is regulated?”

That’s a really good question, Mr. Nixon appointee. Yes, there was a time when Republicans actually appointed thoughtful justices who had genuine human thoughts and feelings beyond an overweening fondness for guns ‘n’ embryos (worst Guns ‘n’ Roses tribute band ever, by the way; avoid at all costs).

But thanks to groups like the NRA, which is thankfully dissolving faster than Steve Bannon’s scurfy teats in a Reno hot tub, these modern and fatally flawed notions about the Second Amendment (i.e., that it sanctions the use of military-style weapons among ordinary citizens) have proliferated, to the point that they’re now de rigueur among conservative judges and Republican politicians, who never saw a massacre they didn’t suppose they could think and pray down the memory hole.

Needless to say, officials in California, which began to restrict assault weapon use in 1989 and has continued to update its regulations since then, are not taking this lying down.

In a statement, Gov. Gavin Newsom said, “Today’s decision is a direct threat to public safety and the lives of innocent Californians, period. As the son of a judge, I grew up with deep respect for the judicial process and the importance of a judge’s ability to make impartial fact-based rulings, but the fact that this judge compared the AR-15 — a weapon of war that’s used on the battlefield — to a Swiss Army Knife completely undermines the credibility of this decision and is a slap in the face to the families who’ve lost loved ones to this weapon. We’re not backing down from this fight, and we’ll continue pushing for common sense gun laws that will save lives.”

Meanwhile, in a statement announcing his intent to appeal the decision, California Attorney General Rob Bonta said, “Today’s decision is fundamentally flawed, and we will be appealing it. There is no sound basis in law, fact, or common sense for equating assault rifles with Swiss Army knives—especially on Gun Violence Awareness Day and after the recent shootings in our own California communities.”

How long will conservatives’ gun fetish continue? Until we stop it, I presume.

As former Chief Justice Burger notes, this fraud has been going on for a long time. Unfortunately, Donald Trump, who was elected by a minority of Americans, managed to appoint three Supreme Court justices (including one thief justice), and we’ll be living with that undemocratic disaster for years to come. Then there are all the conservative judges Mitch McConnell planted like landmines throughout the federal judiciary.

Maybe it’s time to reconsider adding justices to the high court so risible decisions like this can ultimately be reversed? Just a thought.

It made comedian Sarah Silverman say “THIS IS FUCKING BRILLIANT” and prompted author Stephen King to shout “Pulitzer Prize!!!” (on Twitter, that is). What is it? The viral letter that launched four hilarious Trump-trolling books. Get them all, including the finale, Goodbye, Asshat: 101 Farewell Letters to Donald Trump, at this link. Just $12.96 for the pack of 4! Or if you prefer a test drive, you can download the epilogue to Goodbye, Asshat for the low, low price of FREE.