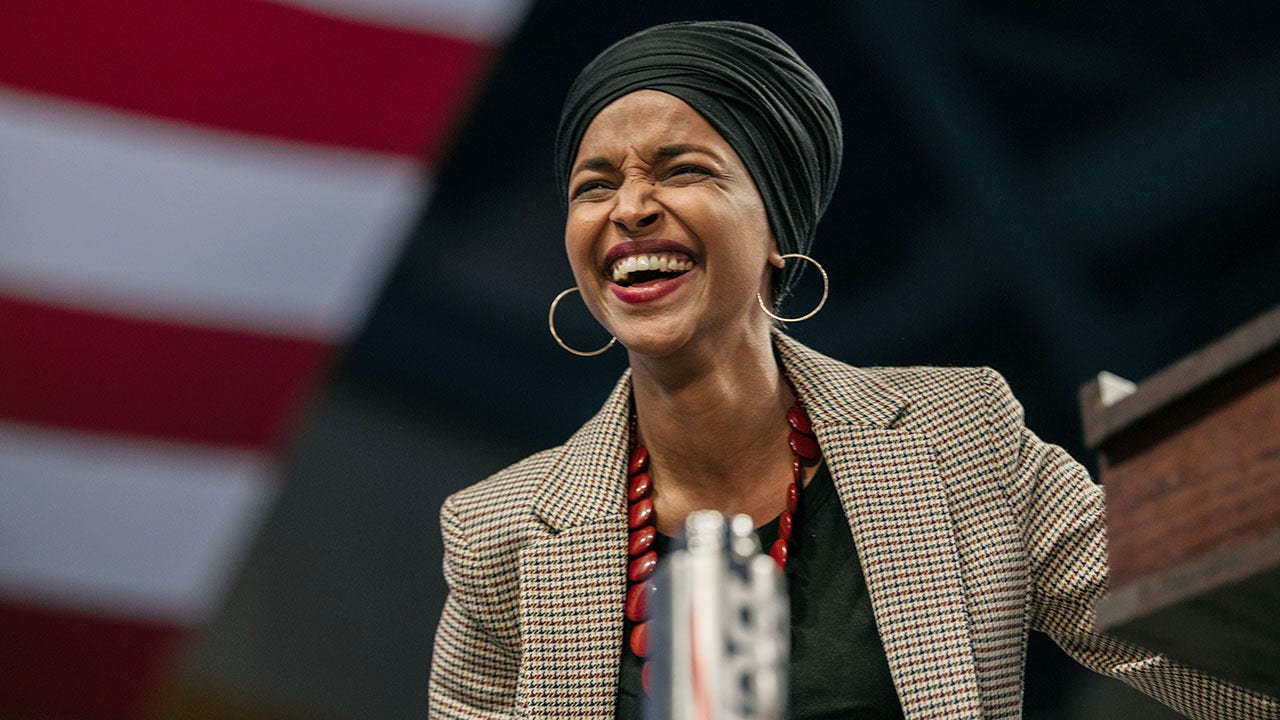 Rep. Ilhan Omar, D-Minn., has come under fire over a recent tweet that grouped the U.S. and Israel with terrorist groups Hamas and the Taliban, all of which she said had committed “unthinkable atrocities.”

While Omar later walked back the statement, following pressure from members of both parties, it wasn’t the first time that she has stoked controversy.

Here are some of the most controversial statements the second-term Minnesota Democrat has made since ascending to Congress.

Comparing the U.S. and Israel to terrorist groups

Omar’s most recent controversial statement has landed her in hot water with senior members of her own party as well as her opponents when she compared America and Israel to murderous terrorist groups Hamas and the Taliban and said the two democracies have committed “unthinkable atrocities.”

ILHAN OMAR SAYS AMERICA, LIKE HAMAS AND THE TALIBAN, HAS COMMITTED ‘UNTHINKABLE ATROCITIES’

“We have seen unthinkable atrocities committed by the U.S., Hamas, Israel, Afghanistan, and the Taliban,” wrote Omar. “I asked [Secretary of State Antony Blinken] where people are supposed to go for justice.”

The tweet caught fire online and saw multiple members of her own party speak out against Omar’s rhetoric in a statement on Wednesday.

“Equating the United States and Israel to Hamas and the Taliban is as offensive as it is misguided,” the group of Democrats, said of Omar. The signers of the statement included Reps. Brad Schneider, D-Ill.; Brad Sherman, D-Calif.; Josh Gottheimer, D-N.J.; Jake Auchincloss, D-Mass.; and Ted Deutch, D-Fla.

“Ignoring the differences between democracies governed by the rule of law and contemptible organizations that engage in terrorism at best discredits one’s intended argument and at worst reflects deep-seated prejudice,” the group added. “The United States and Israel are imperfect and, like all democracies, at times deserving of critique, but false equivalencies give cover to terrorist groups. We urge Congresswoman Omar to clarify her words placing the US and Israel in the same category as Hamas and the Taliban.”

Omar responded to the criticism by accusing the group who sent the press release — which also included former DNC chairwoman Debbie Wasserman Schultz, D-Fla., and House Judiciary Committee chairman Jerrold Nadler, D-N.Y. — of using “islamophobic tropes” in a late-night tweet after the release was sent.

“It’s shameful for colleagues who call me when they need my support to now put out a statement asking for ‘clarification’ and not just call,” she said on Twitter. “The islamophobic tropes in this statement are offensive. The constant harassment [and] silencing from the signers of this letter is unbearable.”

Omar’s fellow “Squad”-mate Rep. Rashida Tlaib, D-Mich., who has her own history of controversy, defended Omar’s tweet — which Omar claimed the coverage of “directly” incited death threats against her — by accusing the Democrats that wrote the release of “purposefully” distorting the Minnesota Democrat’s words.

“Once again disappointed in my colleagues quicker to condemn [Omar] than they are to condemn the human rights abuses of the apartheid state of Israel,” Tlaib tweeted on Thursday. “This statement purposefully distorts her words, stokes anti-Muslim hate toward my sister in service, and is unacceptable.”

Omar is a staunch, open critic of Israel and her controversial statements only became more enflamed during the recent conflict between Israeli forces and Palestinian Authority-backed terror group Hamas.

Thousands of rockets flew indiscriminately into Tel Aviv and Jerusalem from Hamas in the West Bank and Gaza Strip as the Israeli forces retaliated with their own, targeted air strikes. The fighting came after clashes between Israeli police and Palestinians in Jerusalem over potential evictions by the Israeli government.

After weeks of fighting, the two sides declared a ceasefire, but Omar said the fighting stopping wasn’t enough and that the U.S. was “underwriting crimes against humanity” through support for Israel and that there needed to be “accountability for every war crime committed.”

Amid the conflict, Omar also accused Israel of engaging in “terrorism” through their airstrikes that tragically killed civilians in the Gaza Strip.

“Israeli air strikes killing civilians in Gaza is an act of terrorism. Palestinians deserve protection. Unlike Israel, missile defense programs, such as Iron Dome, don’t exist to protect Palestinian civilians. It’s unconscionable to not condemn these attacks on the week of Eid,” Omar wrote on Twitter.

In 2019, during her first term in office, Omar came under fire for a since-deleted tweet from 2012, where she wrote “Israel has hypnotized the world, may Allah awaken the people and help them see the evil doings of Israel.”

Omar said the “unfortunate words were the only words” she could “think about expressing at that moment” while referring to the Israeli armed forces’ 2012 operation against Hamas in Gaza. She also defended the comments while speaking to comedian Trevor Noah on “The Daily Show.”

Omar, who previously has expressed regret over that tweet, responded by saying she had to “take a deep breath” and “understand where people were coming from and what point they were trying to make.”

The congresswoman also stirred up intense backlash from both sides of the aisle when she tweeted that the American Israel Public Affairs Committee (AIPAC) was paying American politicians to support Israel.

Omar apologized for the tweet, saying her intention is “never to offend” her constituents or Jewish-Americans with her tweets.

“Anti-Semitism is real and I am grateful for Jewish allies and colleagues who are educating me on the painful history of anti-Semitic tropes,” Omar wrote in a statement. “My intention is never to offend my constituents or Jewish Americans as a whole. We have to always be willing to step back and think through criticism, just as I expect people to hear me when others attack me for my identity. This is why I unequivocally apologize.”

“At the same time,” she added, “I reaffirm the problematic role of lobbyists in our politics, whether it be AIPAC, the [National Rifle Association] or the fossil fuel industry. It’s gone on too long and we must be willing to address it.”

“Some people did something”

One of the most notable controversies Omar caused came while she was speaking at a Council on American-Islamic Relations (CAIR) fundraiser in 2019 where she spoke about the September 11th Attacks and CAIR’s founding.

“Here’s the truth: Far too long we have lived with the discomfort of being a second-class citizen and, frankly, I’m tired of it, and every single Muslim in this country should be tired of it,” Omar said.

“CAIR was founded after 9/11 because they recognized that some people did something, and that all of us were starting to lose access to our civil liberties,” Omar continued, referencing the attacks where Islamic terrorists hijacked four planes that were used in the worst terrorist attack on U.S. soil.

Omar was strongly rebuked by many people for her words, including Texas Rep. Dan Crenshaw, R-Texas, and Nicholas Haros, Jr., whose mother, Francine, was killed in the attacks.

“Today I am here to respond to you exactly who did what to whom,” said Haros Jr., who sported a shirt with Omar’s words and was met with some applause from a crowd of families and relatives who had gathered for the anniversary ceremony. “Madam, objectively speaking, we know who and what was done. There is no uncertainty about that. Why your confusion?

The Democratic congresswoman posted a tweet the same day Haros, Jr. spoke, writing the attacks on that fateful September day “was an attack on all of us.”

“We will never forget the thousands of Americans who lost their lives in the largest terror attack on U.S. soil,” shhe wrote. “I will continue to fight to make sure we care for the first responders and families who lost loved ones. #NeverForget”

Pushing the trope that U.S. politicians have a dual loyalty to Israel

Omar also pushed the anti-Semitic trope that politicians in the U.S. have a dual loyalty to Israel, suggesting that some lawmakers in D.C. are “pushing for allegiance” to Israel.

“I want to talk about the political influence in this country that says it is OK for people to push for allegiance to a foreign country,” Omar said in 2019. “I want to ask why is it OK for me to talk about the influence of the NRA, of fossil fuel industries, or big pharma, and not talk about a powerful lobbying movement that is influencing policy.”

The congresswoman added that she believed the only reason she was being criticized as anti-Semitic for being Muslim and that she is well-founded in her criticism of Israel.

“It is as if every time we say something that is supposed to be about foreign policy or engagement or the efficacy of ending oppression or the freeing of every human life and wanting dignity, we get labeled something that ends the discussion, because we end up defending that and no one gets to have the broader debate about what is happening in Palestine,” Omar said.

Omar doubled down on her comments after facing backlash from senior members of the Democratic party, saying to former Rep. Nita Lowey, D-N.Y., that American “democracy is built on debate.”

“I should not be expected to have allegiance/pledge support to a foreign country in order to serve my country in Congress,” Omar tweeted.

“I am told everyday that I am anti-American if I am not pro-Israel. I find that to be problematic and I am not alone. I just happen to be willing to speak up on it and open myself to attacks,” she continued.

“My Americanness is questioned by [then-President Trump] and the [GOP] on a daily basis, yet my colleagues remain silent,” she added. “I know what it means to be American and no one will ever tell me otherwise.”

The recent comments by Omar saw condemnation from the leadership of her own party on Thursday, but her fellow “Squad” members came to her defense against the new criticism.

“Pretty sick & tired of the constant vilification, intentional mischaracterization, and public targeting of [Omar] coming from our caucus,” Rep. Alexandria Ocasio-Cortez, D-N.Y., tweeted. “They have no concept for the danger they put her in by skipping private conversations [and] leaping to fueling targeted news cycles around her.”

Brian Kemp Slams Stacey Abrams for Something She Didn’t Do — but He Did
Don’t believe the attack ads. I won’t ban birth control — but I will stand up for your rights.
Opinion | How many nutty stances can the Republican Party take?
White House gears up to promote Joe Biden’s wins during August lull in Washington
ILA | California Update: Fiscal Committees Consider Remaining Anti-Gun Bills