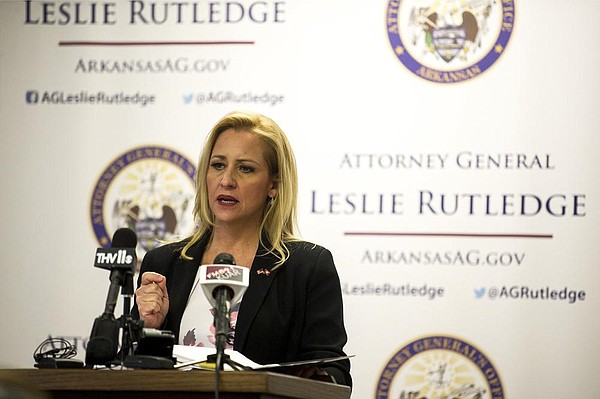 A lawsuit that accuses Arkansas Attorney General Leslie Rutledge of using her office to promote her political career over the best interests of the state and illegally using public money to do so has survived its first legal challenge.

A Pulaski County circuit judge ruled that one of the three claims against her can proceed to trial.

The other two claims in the 5-month-old suit will be dismissed unless the plaintiffs can produce more evidence to back up the accusations that the Batesville Republican has done anything wrong. Judge Alice Gray’s three-page ruling issued Thursday gives them 18 days to produce additional proof or she’ll dismiss those counts.

Rutledge, who is running for governor, has argued that she’s immune from the litigation, but Gray said she won’t take up that issue until after the 18-day deadline expires.

The judge rejected the argument that the courts, as the judicial branch of government, don’t have the power to restrict the authority of an executive branch official like the attorney general. However, the judge stated that her position on that defense is not necessarily final and that Rutledge’s lawyers could be able to raise it again as the litigation progresses.

Gray similarly rebuffed the argument that the plaintiffs, an eight-member group of tax-paying voters, have standing to sue.

Rutledge, 45, is Arkansas’ first elected female attorney general, and her supporters have labeled the litigation frivolous and politically motivated.

Surviving in the lawsuit is the accusation that Rutledge has illegally involved herself and Arkansas in out-of-state litigation.

The suit targets Rutledge’s work to support lawsuits before the U.S. Supreme Court involving the outcome of last year’s presidential election, as well as her defense of the National Rifle Association in federal litigation in New York seeking to dissolve the gun-rights group over accusations of illegal activity.

Gray stated that the plaintiffs have produced sufficient evidence to overcome Rutledge’s arguments for dismissal. Rutledge has said promoting fair elections and gun ownership fall within her job duties, but the plaintiffs say the law allows Arkansas to intervene in out-of-state litigation only when a state agency is directly involved.

The portions of the lawsuit on the chopping block include accusations that Rutledge has taken to advertising the services of the attorney general’s office to promote her candidacy for governor. In a statement, the attorney general said she is gratified that Gray has found insufficient evidence to back up that claim.

“Rutledge is pleased that the court agreed that the Rutledge Report public service announcements are a legal, important educational tool used by Attorney General Rutledge to reach millions of Arkansans,” a spokesman said. “However, Attorney General Rutledge disagrees with Judge Gray’s ruling regarding out-of-state litigation and is considering appropriate legal options to ensure she is able to defend Arkansas’s interests.”

The judge also found that the plaintiffs have not shown sufficient evidence to proceed with the claim that Rutledge’s participation in groups supporting former President Donald Trump, such as the Lawyers for Trump and The Rule of Law Defense Fund, were illegal.