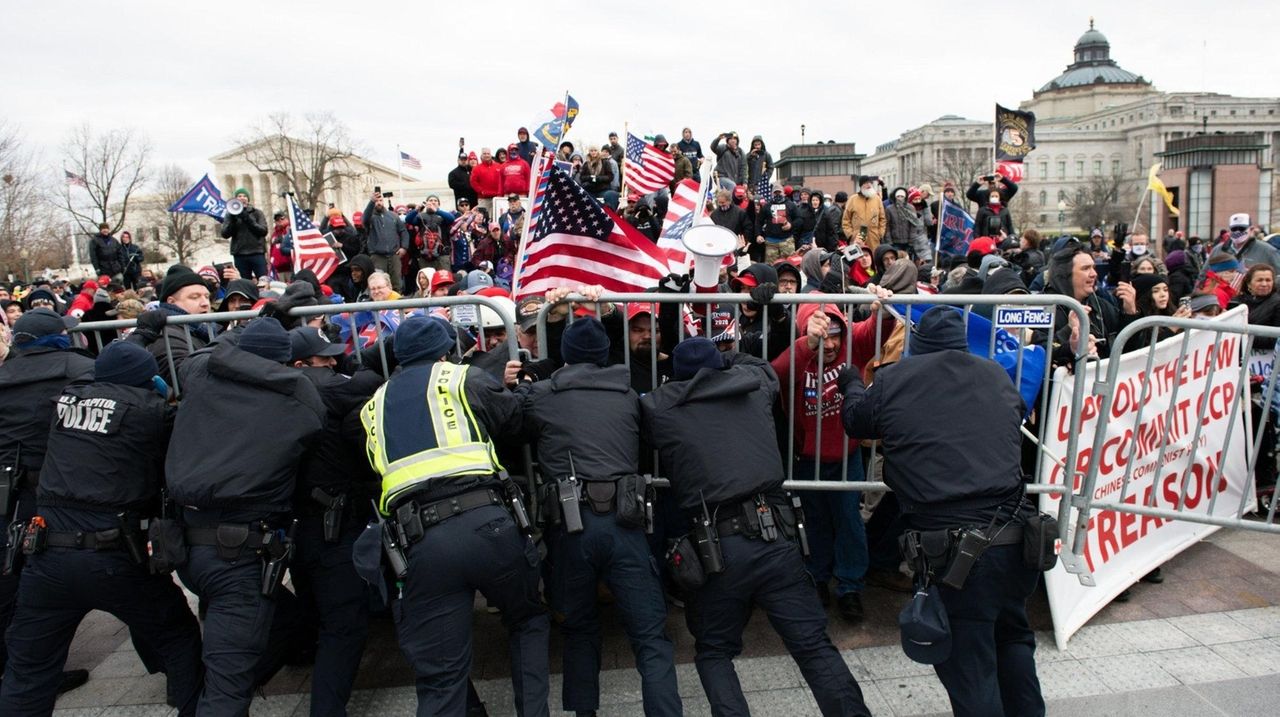 Using flag as a weapon is worst desecration

June 14 is Flag Day. On numerous occasions, but more frequently in recent years, I have listened to people of all ages and backgrounds express their disappointment and, in some cases, their anger over witnessing acts that desecrate and disrespect our American flag.

While I understand that these expressions are a protected right, I don’t agree with these symbolic acts and prefer that others find more substantive and productive ways to demonstrate their point. What angers me more is that some self-righteous “patriots” in their criticism of flag-burning and flag desecration conveniently omit the worst example of desecrating our flag.

Using it as a weapon to attack the Capitol Police in Washington on Jan. 6 is not a protected right [“Widespread failures in riot,” News, June 9].

As a Holocaust survivor, educator and docent at the Holocaust Memorial & Tolerance Center of Nassau County, I cannot stress enough the need for strengthening the mandates for Holocaust education [“Holocaust teaching bill too political,” Opinion, June 8]. Its relationship to the horrific events of the 1930s and ’40s is, as William F.B. O’Reilly wrote, a seminal event.

Appropriate Holocaust education traces the path backward through the ages as well as into modern times. Holocaust education defines genocide, and places those horrific events within the context of recognizing an understanding of the implications of genocide on all of society.

I believe that one should not question the need for appropriate human rights education. This is equal to the need for understanding math, reading and science. Holocaust education is relevant, meaningful and critical to maintaining and promoting a democratic society.

New York State is a leader in education. This is not the time to step back, but to step forward into a better future. The Holocaust Memorial & Tolerance Center, as Long Island’s leading Holocaust education center, offers its unwavering support for the legislative demand for a higher standard of Holocaust education by State Sen. Anna Kaplan (D-North Hills).

I agree with a reader that New York State has effective gun laws [“U.S. should have gun titling system,” Letters, June 11]. And that many states do not. There should be uniform gun laws throughout the country. But gun titling?

We have pistol permits. They list every pistol or revolver a person legally owns. A firearms license is a state license issued by county licensing officers. The permits are reviewed periodically by law enforcement, usually the pistol section of a police or sheriff’s department.

Most crimes are committed with illegal weapons, stolen or received through other illegal methods.

Most slippery slope in gun proliferation

A reader wrote that automobiles and knives when used irresponsibly or dangerously may cause injury or death, and could theoretically result in product liability lawsuits [“Gun manufacturers bill a slippery slope,” Letters, June 7].

I offer this perspective: In contrast to automobiles and knives, high-powered military grade semiautomatic firearms are produced for the primary purpose of delivering lethal injury to as many people, in the shortest time, as possible. The sale of these firearms to just about anyone, with little or easily bypassed regulation, should be of concern to all law-abiding Americans.

Perhaps making gun manufacturers accountable is one approach to reform. The slippery slope argument fostered by the National Rifle Association propaganda and tacitly supported by spineless politicians is absurd.

Suggesting minimal regulation like outlawing bump stocks or limiting the types of guns available to the public invariably raises cries by the misguided that the slippery slope will lead to banning all guns or that the Second Amendment will be repealed. Again, absurd and not the goal.

Rather, some minimal rational regulation is not only appropriate, but absolutely necessary. The far more dangerous slippery slope is the seemingly uncontrolled proliferation of weapons of mass death in the name of freedom.

With a federal ruling in California reversing the 30-year-old ban of assault weapons, mass shootings will doubtlessly spike even higher from their already grotesque numbers [“Judge tosses Calif. weapons ban,” News, June 6]. More innocents will be murdered, . More students will be slaughtered, and the same misguided politicians and judges will continue to provide lip service to the families of the dead.

Assault weapons are a far cry from the muskets and flintlock pistols of 1791. If James Madison could have foreseen the existence of weapons that couldfire off 600 rounds per minute, he more thanlikely would have written sane, common-sense caveats for the common good into the Second Amendment.

Violence and crime seem to be exploding across the country, especially in New York City. It seems that the only solution our leaders and politicians come up with is “gun control” [“Gun bills approved,” News, June 9]. By definition, Gun controls are laws, and criminals do not follow the law. Isn’t it obvious that the solution is to let law enforcement do theirits job unhindered and also provide stiff punishment for those who commit violent crimes, especially when guns are involved?

Criminals are using guns more frequently because the consequences are less severe now than they used to be now. Legal gun owners already go through stringent background checks in New York State. They are not the threat. We need to get criminals and illegal guns off of our streets. That’s the solution.

We were brought into this world without our consent. We did not choose who we were born to. We did not choose or our color. We came here with no knowledge of life, love or religion. WSome were taught that some people are superior, some inferior, some smart, some ignorant. We learned by what we were told.

Some of us realized that what we were taught was wrong and tried to change it. Some of us held on to the hateful things. Each day, we struggle to change things for the better or for worse, we remember and we forget. This world is getting smaller every day. We must learn to live together, equally. One race. The human race.

Today, America is sick. We need help. We take matters into our own hands with assault weapons. We settle our own grievances with violence. More and more groups of people are being brought into the pool of those who are to be beaten or executed. We accept hate and injustice. We are becoming immune to the violence. We pick and choose what is right. We must change and forget the hate if we are to survive as a civilized society.