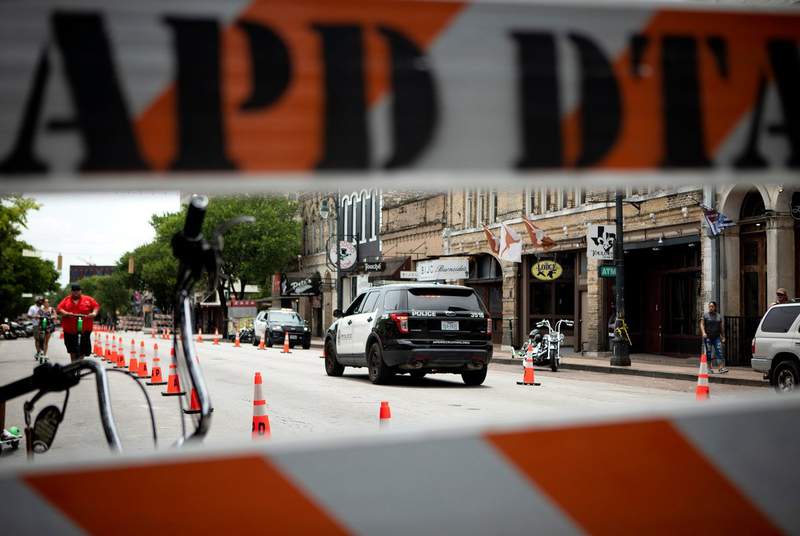 Sign up for The Brief, our daily newsletter that keeps readers up to speed on the most essential Texas news.

A shooting in downtown Austin that killed one person and injured 13 others early Saturday morning has renewed calls from Democratic lawmakers and gun safety groups for the Legislature to take action to reduce gun violence.

“You can’t write laws to stop every tragedy,” Moody said. “But the fact that we didn’t close very obvious loopholes that might at least stop some, to me, is unconscionable.”

Austin police arrested one suspect — whose age and identity are not being released because the suspect is a juvenile — in connection with the shooting. The second suspect, a 17-year-old male, has been arrested, according to the Austin American-Statesman.

Gyl Switzer, executive director for Texas Gun Sense, said Gov. Greg Abbott should veto House Bill 1927, a bill passed by the Legislature that would allow Texans to carry handguns without a permit. The bill, which Abbott has not yet been signed into law, would apply only to people who are 21 or older, so it would not have affected the weekend shooting.

“It’s a danger to have more guns out and about and to have those guns in the hands of people who have not had background checks, not had training … and have not demonstrated any proficiency in shooting.” Switzer said.

Rep. Vikki Goodwin, an Austin Democrat, also called on Abbott to veto the permitless carry bill. She said in an interview that although permitless carry would not have applied to this situation, “it’s just the tone that you set.”

Goodwin added she would be open to a special session on gun legislation but doesn’t see the conversation picking up momentum in a Republican-dominated House that opposed several gun reform bills this year.

“I haven’t heard any hint that we would have a special session around gun regulation,” Goodwin said. “I just don’t feel that the governor considers this an issue that he needs to address.”

“When I talk to gun owners, NRA [National Rifle Association] members and voters, people don’t understand why we allow strangers to sell guns to total strangers when they have no idea if the person they’re selling the gun to could be a felon, could be someone who’s getting a gun to go commit a crime or could be a potential mass shooter or someone who has serious mental issues,” said Lt. Gov. Dan Patrick, who leads the Senate, in an interview with The Dallas Morning News in 2019.

The El Paso shooting resulted in more than 20 fatalities at a Walmart store on Aug. 3, 2019. Later that month, a shooting spree in Midland-Odessa resulted in eight deaths, including the perpetrator, and 25 injuries.

Conversations on gun safety initiatives at the time resulted in the Texas Safety Action Report, released after the El Paso and Midland-Odessa mass shootings. The 15-page report includes recommendations to incentivize background checks on gun sales between strangers and outlaw so-called straw purchases of firearms.

Although the report seemed to have broad bipartisan support early on, lawmakers have passed only a single measure from the report — a bill that makes it a state crime to knowingly falsify information on a federal background check in order to obtain a firearm.

Switzer said that while the bill is a step in the right direction, it doesn’t address gun purchases that don’t require background checks, such as those made at gun shows or person to person.

“So there are a lot of gun sales that won’t be touched by background checks, and therefore, this bill wouldn’t apply to them,” Switzer said.

Sen. César J. Blanco, a Democrat who represents El Paso, said in a statement that in the first legislative session since the two mass shootings, lawmakers should have done more to deliver solutions meant to curb gun violence, noting that only one recommendation from the action report was passed.

“We need to do more and come together to keep our communities safe,” Blanco said. “Our constituents deserve that.”

Last year, 34 mass shootings — defined as including four or more victims, including those injured — were reported in Texas, up from 30 in 2019, according to the Gun Violence Archive database.

“This problem will continue to get worse until Texas’ elected leaders have the courage to address it,” Sen. Sarah Eckhardt, D-Austin, said in a statement after the Austin shooting. “For years, Texans have endured empty promises and pointless roundtables while legislative session after legislative session produces more and more dangerous, unregulated gun laws.”

The Texas State Rifle Association, a gun advocacy organization based in Bastrop, did not respond to requests for comment.

Disclosure: Walmart has been a financial supporter of The Texas Tribune, a nonprofit, nonpartisan news organization that is funded in part by donations from members, foundations and corporate sponsors. Financial supporters play no role in the Tribune’s journalism. Find a complete list of them here.