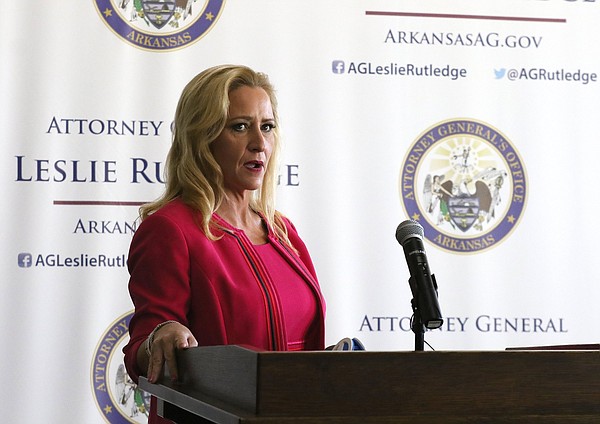 A lawsuit that accuses Arkansas Attorney General Leslie Rutledge of using her office to promote her political career and of illegally using public money to do so survived its first legal challenge last week.

Back up: What does the lawsuit allege?

• Rutledge’s participation in groups supporting former President Donald Trump, such as the Lawyers for Trump and The Rule of Law Defense Fund, were illegal

Pulaski County Circuit Judge Alice Gray ruled the plaintiffs have shown enough evidence for their claim that Rutledge illegally involved herself and Arkansas in out-of-state lawsuits to progress.

Among the cases mentioned by the plaintiffs are federal litigation in New York regarding the National Rifle Association and a case that unsuccessfully called on the Supreme Court to challenge the outcome of the 2020 presidential race in Pennsylvania.

The plaintiffs point to Arkansas Code 25-16-703 as evidence that the attorney general can only join that outside litigation when a state actor, like a public official or agency, is directly involved.

In the same ruling last week, Gray said the plaintiffs have not shown enough evidence on the other two major claims in the lawsuit, so those claims will be dismissed if the plaintiffs cannot improve their case in the next 18 days.

How has Rutledge responded?

Since her first response in the case, Rutledge has argued that she is immune from the litigation the way the courts have held that judges, prosecutors and legislators are. Gray has declined to take up that issue until after the 18-day period.

Rutledge also claims that the courts, as the judicial branch, don’t have the power to restrict the authority of an executive branch official. Gray has rejected this claim while also stating her position is not necessarily final.

As to her involvement in out-of-state litigation, Rutledge said promoting fair elections and gun ownership fall within her job duties.