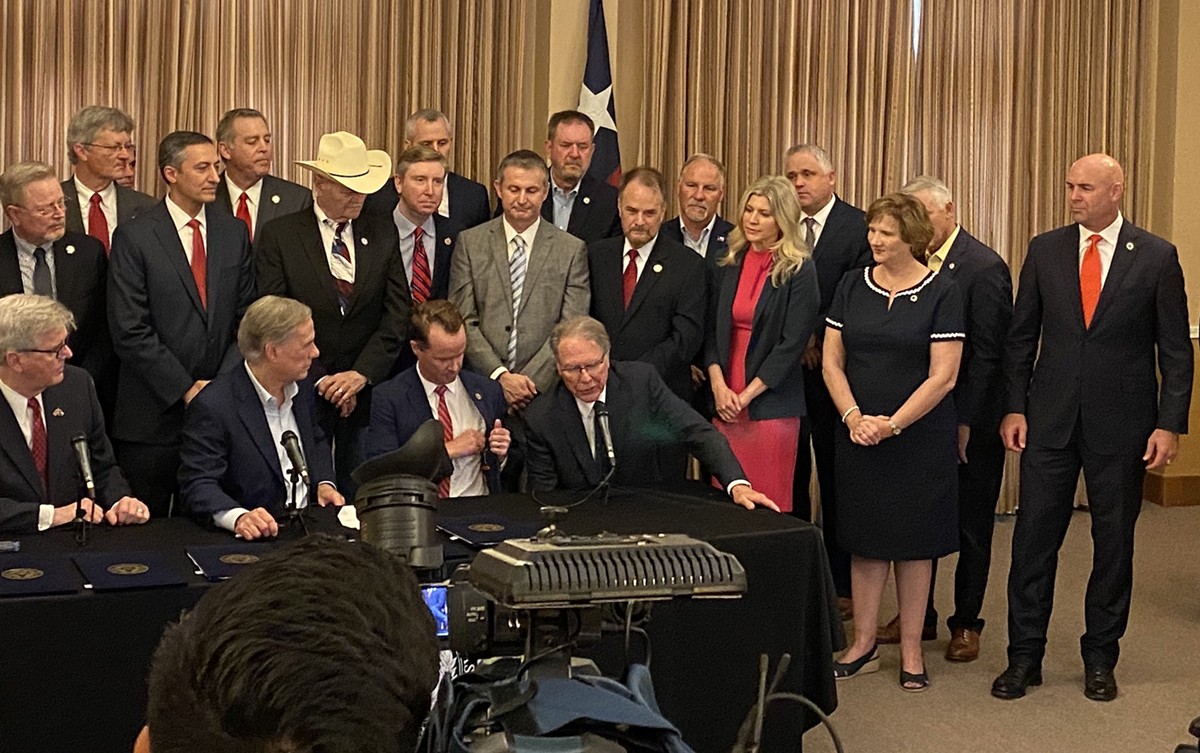 Surrounded by a pro-gun crowd, Gov. Greg Abbott appeared Wednesday on the grounds of the Alamo to sign seven pieces of legislation loosening firearms restrictions in the state.

The most controversial of those, Senate Bill 1927, allows Texans to carry handguns without a license or training starting on September 1. That so-called constitutional carry proposal was passed over the objections of gun safety advocates and some law enforcement groups.

Wayne LaPierre, the embattled chief of the National Rifle Association, sat at the desk while Abbott signed the bills. The gun-rights organization made more than $700,000 in campaign contributions to Texas lawmakers between 2000 and 2019, according to a Dallas Morning News investigation.

Periodic whoops went up from the audience as Abbott and Lt. Gov. Dan Patrick separately trumpeted the signing as a direct defiance of the Biden administration.

Indeed, two of the new laws appear designed to spark court fights with the feds. One prohibits the enforcement of some federal regulations on firearms in the state, while another removes prohibitions on federally regulated suppressors — or silencers — so long as they’re made and distributed in Texas.

Members of the crowd wore NRA lapel pins and Gun Owners of America shirts, and one guest mingled wearing a shirt reading “Shove gun control up your” with a Democratic Party-style donkey emblazoned below. As Abbott spoke about Texans along the border needing firearms for security, someone shouted, “Build the wall!”

During a brief Q&A session, the audience booed local Univision reporter Jaime Peluffo after he asked Abbott whether he’d held the signing at the Alamo instead of Austin due to a shooting in the state capital that left one dead and more than a dozen injured over the weekend.

“You must be from out of state,” Abbott quipped. The governor then said he met with the family of the 25-year-old man slain in the shooting and that they’d asked him not to infringe on gun rights after the tragedy.

When Peluffo tried to ask another question, the crowd shouted him down. Only one additional question came from members of the media. The remaining handful of softball queries were posed by members of the audience.

In contrast to a press conference the day before where Abbott announced plans to fund a border wall, no one asked him about the potential instability of the state’s electric grid. At that event, a visibly testy Abbott accused critics of cheerleading another power failure like the one in February.

“Everyone who has been trying to make a big deal about the power grid over the past two days, I have found were the same people who called me a neanderthal when I opened Texas 100%,” Abbott said at that event. “They were hoping that there would be a power failure.”

Stay on top of San Antonio news and views. Sign up for our Weekly Headlines Newsletter.