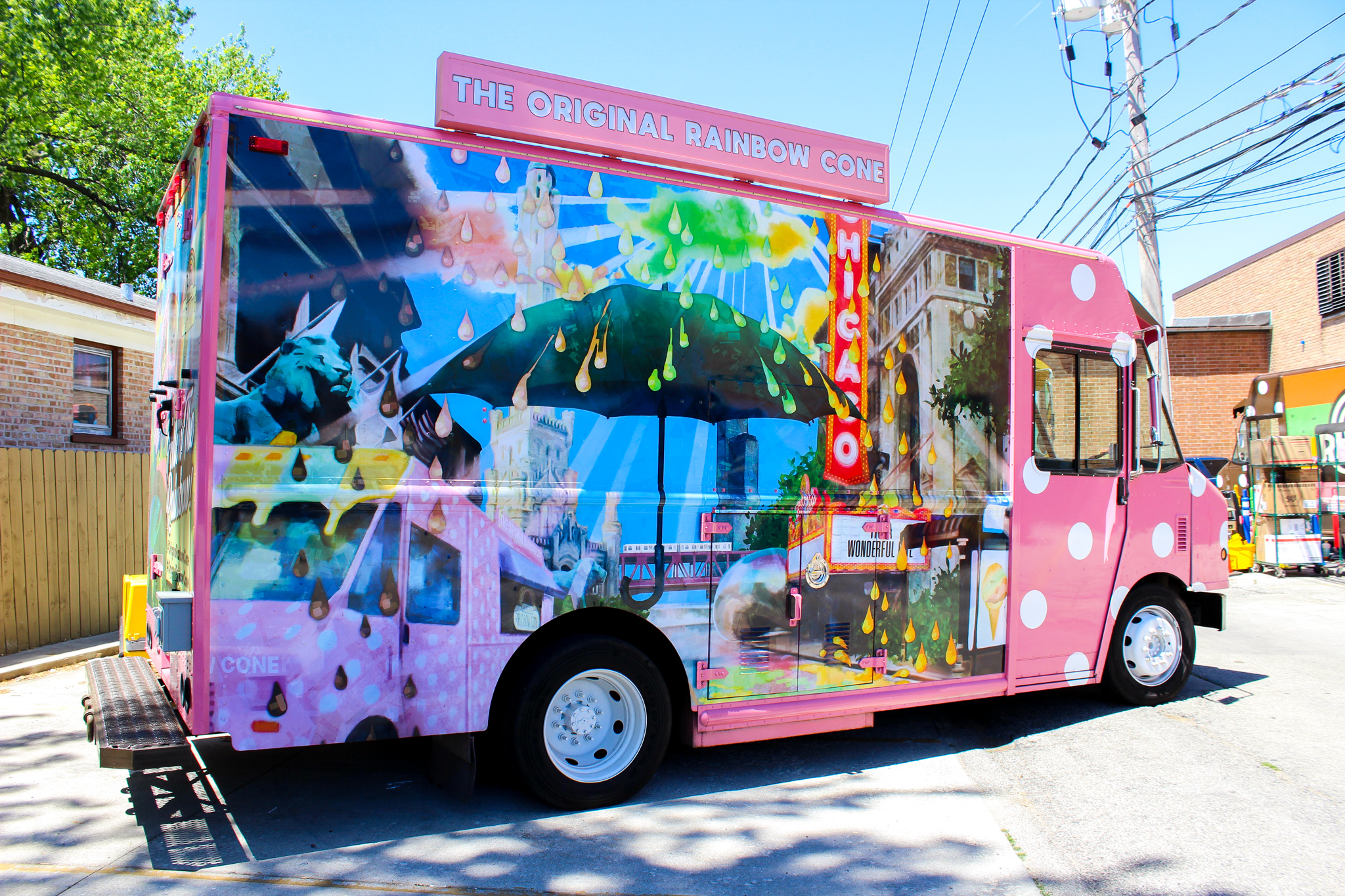 The Cleve Carney Museum of Art (CCMA) and the McAninch Arts Center (MAC) at the College of DuPage (COD) honors the birthday of Frida Kahlo in ways beyond its “Frida Kahlo: Timeless” exhibition, the most comprehensive presentation of Kahlo’s work in the Chicago area in over forty years. Monday, July 5 sees the debut of a new piece of digital artwork celebrating Kahlo, which will be projected onto the two-and-a-half-acre river façade of theMART, as part of Art on theMART’s Summer Series, and will remain up through September 16. Projections will light up nightly at 9 and 9:30pm, animated by illustrator and international projection-mapping artist and former COD professor George Berlin of Glen Ellyn. The piece features several recognizable Kahlo works, including “Self Portrait with Small Monkey” (1945) and “Self Portrait in a Velvet Dress” (1926). The projections will be accompanied by one of the most popular Mexican contemporary classical orchestral compositions,“Danzón No. 2,” by Mexican composer Arturo Márquez and performed and recorded by New Philharmonic conducted by Kirk Muspratt. In addition, CCMA and the MAC will celebrate Kahlo’s 114th birthday Tuesday, July 6 with an outdoor celebration from 10am-2pm. The day will feature live music by Mariachi Monumental de México; a special appearance by Miss Mexican Heritage 2021; vendors selling Mexican wares; food by Santa Fe Restaurant; strolling Frida Kahlo lookalikes; face painting and printmaking. More information on Art on theMART is here; on CCMA activities here.

The Original Rainbow Cone’s Chocolate Ice Cream Truck will be parked outside the Shedd Aquarium and The Field Museum of Natural History this summer each day from 11am-6pm. The historic ice cream purveyor now has five ice cream trucks that travel around the Chicago area, Rainbow Cone says in a release, each named after one of the layers that make up the famous Rainbow Cone. Rainbow Cone’s truck finder reveals the locations and hours of operation for each truck. More here.

Open TV’s Aymar Jean Christian [Newcity Film 50] joins an eclectic roster of ten jurors, known as the Peabody Interactive Board. The Peabody Awards are expanding unveiled award categories to encompass interactive, immersive and new media categories, details the H0llywood Reporter. In a statement, Jeffrey Jones, executive director of Peabody, says “Creators are pioneering new methods to tell powerful stories and reach new audiences, and the achievements are extraordinary. With the introduction of interactive media as its own distinctive category, we’re thrilled to be recognizing groundbreaking and important narratives in these digital spaces.”

Remembrances continue for an exemplary Chicago scholar and mentor. Executive editor Courtney Berger of Duke University Press, which published six books with Lauren Berlant, writes, “Lauren was a fierce intellectual who relentlessly challenged our assumptions about gender, sex, nation and feeling. Lauren was also an incredibly generous collaborator who sought out opportunities to think alongside and in conversation with others. Even as they dwelled on the structural violence and difficulties of thriving in a world dominated by capitalism, racism, and sexism, Lauren saw the potential for us to radically transform our relationship to the world and to ourselves. Lauren was a wit, who liked to share and hear new jokes. They loved cats, silly cat photos, and elaborate cat furniture. And they could always direct you to the best vegan food in town. Above all, Lauren was a friend and a comrade, and I will miss them terribly.” Berlant turned over the manuscript of their final book to Berger a few weeks before their death, “On the Inconvenience of Other People,” planned for fall 2022.

A salute of another order from other publishers of Berlant: Critical Inquiry has made Berlant’s contributions open access here, as has Berfrois.

After the departure of Kristen McQueary (denied a buyout) from the position, reports Rob Feder, Chris Jones takes the reins of the editorial page on July 12, while continuing to review “the major shows.” “As Chicago’s preeminent culture critic, he has a deep understanding of the city, his home for thirty years, and has built a reputation as frank, fair-minded and scrupulously accurate. Can there be more important attributes for an editorial page editor?” relayed the general manager of the Chicago Tribune Media Group in an internal email. “Chris is committed to upholding the Tribune’s leading citizen status, and its statement of principles, which include the newspaper’s commitment ‘to inform and lead public opinion, to foster commerce and industry, and to furnish that vital check upon government which no constitution can.’”

The bold, hallucinatory “Lost Class” spot about gun violence was created by Leo Burnett Chicago with production by Hungry Man for the Change the Ref advocacy group, reports Adweek. The short film rapidly went viral, as a board member of the bankrupt NRA (National Rifle Association) was tricked into speaking to a sea of empty seats at a nonexistent Las Vegas high school: “Before him stretches a sea of empty white chairs, hiding a chilling truth behind this ceremony. For while [David] Keene believes he is rehearsing for a commencement speech, in reality John Madison Academy is not a real school, and those empty chairs will never be filled. Each of the 3,044 seats represents a student who should have graduated in 2021–if they hadn’t been killed by gun violence.” Sam Shepherd, executive creative director at Leo Burnett Chicago, demurs when Adweek asks about how they convinced the two NRA figures to participate: “Certain elements have to stay part of the secrecy of bringing this to life.”

As the Tribune and other outlets describe conflict and the high turnover (a dozen top roles) in the Lightfoot administration as the two-year anniversary in office approaches, the mayor sees a cause, reports Gregory Pratt at the Tribune. “Look at my predecessors. Did people say that Rich Daley held tea sessions with people that he [disagreed with]? Rahm Emanuel was a polite guy who was a uniter? No. Women and people of color are always held to a different standard. I understand that, I’ve known that my whole life,” Lightfoot said in a WTTW interview. “I absolutely understand that critics, some of them who are out there, are criticizing me cause they don’t like to see a woman assume power and forge ahead on an agenda that is about disrupting the status quo.” Lightfoot also continued her criticism of the Tribune editorial board and other opinion pages by saying they aren’t diverse enough. “The Tribune Editorial Board, which operates separately from the newsroom, recently ran an opinion piece criticizing her ‘tendency toward the thin-skinned, the defensive, the short-tempered.’”

Rapper and poet Mykele Deville is the Hideout’s new booker, reports J. R. Nelson at the Reader. “Deville says his fiancée McKenzie Chinn recommended he apply for the job after the Hideout put out a call at the end of May, and he’ll replace experimental pop musician and Sooper Records co-owner Sen Morimoto in the position. ‘I love being able to be that person to help people get heard and get seen,’ Deville says. ‘The Hideout, our views and ethos were very similar in that way.’”

Jessica Hopper At The Humanities Festival

Jessica Hopper joins Chicago Humanities Festival, in partnership with Women & Children First, for a streaming conversation with NPR music critic Ann Powers about the women who make, play and write about music on Tuesday, July 6 at 7pm. Among the topics: the reissue of Hopper’s 2015 book, “The First Collection of Criticism by a Living Female Rock Critic.” Details and registration for the free event, which includes a live Q&A, here.

The latest developer hoping to overhaul Logan Square’s Congress Theater is aiming for a summer of 2023 opening, reports Block Club Chicago. “Baum Revision is taking over the redevelopment project [and] planning to redevelop the landmark theater at 2135 North Milwaukee, as well as the surrounding apartments and retail space, using the blueprint approved by the city in 2018… The development team aims to begin construction ‘toward the end’ of 2021…. Construction is expected to take between eighteen months and two years. The theater has been vacant for nearly a decade.”

Multiple Jeff-nominated actor and musician Jayson Brooks has joined Annoyance Theatre as managing director. “We are excited to have someone with his artistic vision and talent become the newest part of our team,” the group writes in a release, quoting Brooks: ““I am so excited to join the Annoyance family. It’s the start of a new chapter for both myself and the Annoyance Theatre. I’m looking forward to what we are going to build and bring to our audiences. As the people of Chicago (and the country at large) work to reclaim some sense of normalcy, they’re going to need to laugh and I am lucky to have a hand in facilitating that.”

DuSable Museum of African American History president and CEO Perri Irmer received The Order of Arts and Letters for museum programs highlighting the relationship between African Americans and the French, reports the Sun-Times.

From Sandy Hook to Buffalo: Ten years of failure on gun control
America Mourns Another Shooting by a Young Man With Access to Military-Grade Weapons
Trump scheduled to speak at NRA convention in Houston days after Texas school shooting
North Dakota delegates weigh in on gun laws after Texas shooting – InForum
I’ve Reached The Fifth Stage Of Grief After America’s Latest Mass Shooting