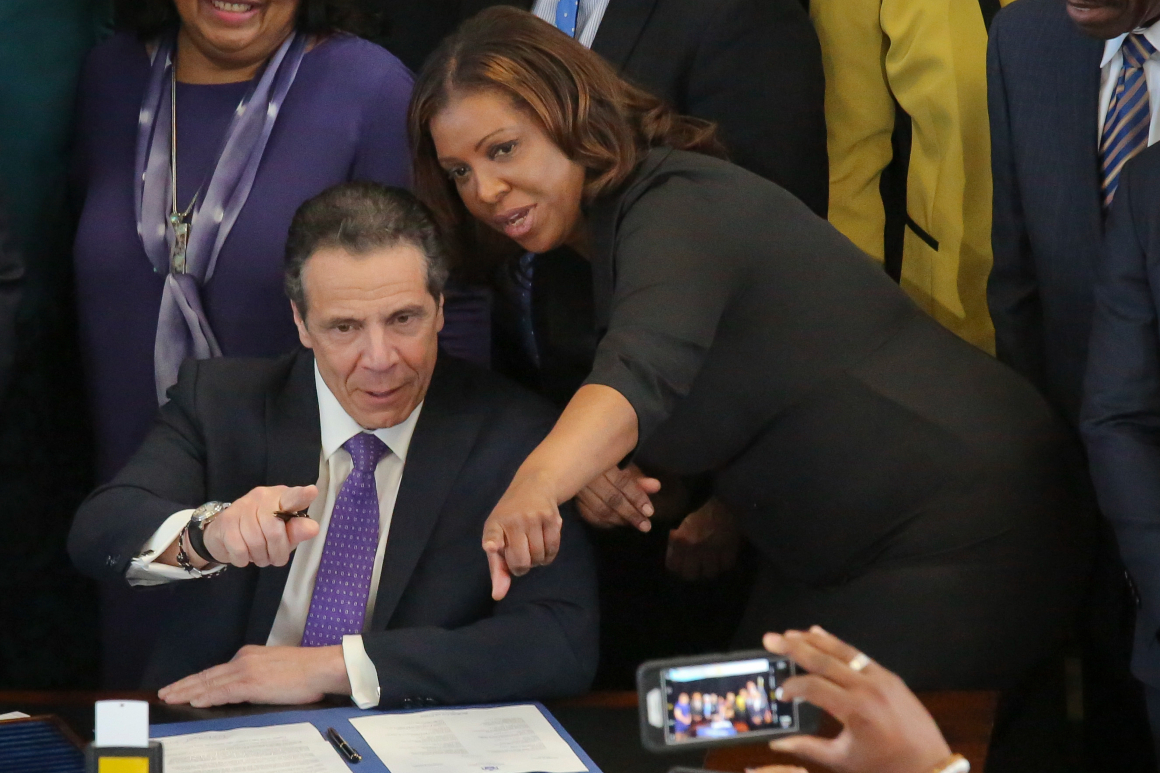 The uncertainty has paralyzed much of New York’s Democratic political apparatus. State lawmakers have put their parallel impeachment investigation on a very slow burn. Cuomo has not revisited his pre-scandal pledge to run for a fourth term in 2022. And potential Democratic primary challengers are waiting to see if they’d face a wounded Cuomo, a vindicated Cuomo, or perhaps no Cuomo at all.

Another investigation lurks in the background, and could be equally significant: The FBI and the U.S. attorney’s office in Brooklyn have been looking into Cuomo’s coronavirus task force and how it handled nursing homes early on in the pandemic.

And so Albany waits, with political strategists, would-be campaign staffers and prospective opponents enduring cortisol spikes each time the attorney general’s office announces a press availability, wondering if it might herald the release of her conclusions. Thus far, though, they have had to fall back on rumination and rumor, playing out various hypotheticals and how those scenarios may, or may not, damage Cuomo’s political fortunes.

“I think we all wait with bated breath: Does she have the intestinal fortitude to indict the governor?” said state Republican chair Nick Langworthy, whose views of Cuomo’s conduct leave little room for ambiguity.

There are no signs that James has empaneled a grand jury or that any of her findings would necessarily rise to the level of prosecution. Most of the speculation in Albany is centered on the consequences of a damning report filled with new details about Cuomo’s conduct — from allegations of sexual harassment to possible misuse of staff in the production of his pandemic memoir, for which he received $5.1 million — and how such a report would influence the impeachment investigation, the first of its kind in more than a century.

One high-level Capitol staffer noted that “everything is an impossibly mapped-out political game theory.”

Waiting — playing the long game for political purposes — is something Cuomo does well, and that patient approach just might allow him to downplay the severity of the James report and claim to have suffered a mere flesh wound, even if in the eyes of critics, his legs are cut out from under him.

“He’s absolutely running a perfect crisis management campaign,” said Democratic strategist Hank Sheinkopf, who noted the strategy is playing out as he predicted in the spring. “It can’t go on forever; at some point there will have to be closure. But the expectation is if there were some sort of criminality involved we would have had a result already of some kind. If they had a political pound of flesh to add, they would have.”

All of which raises the possibility that the James report, whenever it comes, may contain little or nothing new, which might allow last winter’s avalanche of bad headlines to melt away, renewing Cuomo’s chances to win the fourth term that was denied his father, Mario, who served as governor from 1983 to 1994. “If there’s no criminal act, he’s going to be reelected,” said Sheinkopf, who has worked on Cuomo’s previous campaigns.

Republicans, not surprisingly, don’t share Sheinkopf’s assessment of the election’s outcome, although they do agree with its fundamental premise: Barring anything criminal, and despite his astounding fall from grace, Andrew Cuomo will be on the ballot next year. “I think the only way he’s not the nominee of his party is if he leaves through impeachment or arrest or some element of that,” said Langworthy.

If that comes to pass, more than a few New York Democrats — lots of them, in fact — will find themselves sharing a ballot line with a governor they called on to resign earlier this year, when each week seemed to bring some new and damning revelation about Cuomo.

“What I have made very clear and many of my colleagues have made very clear is that the governor should resign,” said Bronx Democrat Sen. Gustavo Rivera. “Maybe some people forgot that we said that once — but I have not. Considering that this is not a criminal investigation — at least the ones that relate to impeachment — the question is whether he’s a trustworthy partner in governance. And we have said he is not.” He added for good measure that he looks forward to working on “many more pieces of legislation” with Lt. Gov. Kathy Hochul — on the assumption that she will take Cuomo’s place sooner rather than later.

“Obviously he would run for reelection because his ego would not allow him to do anything less, but for the sake of governance in the state we cannot allow him to be the Democratic nominee,” Rivera said. “It would be unconscionable to allow this guy to be in that position.”

More than 50 Democratic state lawmakers called for Cuomo’s resignation in March, but there doesn’t appear to have been a moment when that prospect was under consideration on the Capitol’s second floor, where the executive’s offices are located. Some have since joined forces with him on issues that affect their districts. Senate Majority Leader Andrea Stewart-Cousins, who was among those who called on Cuomo to quit, stood with the governor in April at an event and thanked him for promoting vaccination efforts in Yonkers. She later reiterated that her call for Cuomo’s resignation remains unchanged.

Cuomo, in the months since the scandals broke, has stayed busy but specific with his events and bedfellows, around but aloof and away from appearances in the state’s Capitol. It’s a familiar salute to most of his decade in office, but a far cry from the persona he cultivated during the pandemic. On Tuesday he took a whack at addressing rising gun violence by declaring the shootings a state of emergency and signing a first-in-the-nation attempt to open up firearms manufacturers to liability. He did not take questions.

James has stayed busy, too, and more visible than ever. She’s touted her role in multistate antitrust action and her lawsuit against the NRA, marched in two New York City parades, and in the past two weeks made rare appearances in Albany and Syracuse to promote her office’s separate take on combating both drug trafficking and gun violence across the state.

Looming over all of these more-routine activities is the prospect of tumult to come once the James report is released. If it contains new revelations or more-embarrassing details, the governor’s fate might be sealed and the upcoming governor’s race turned upside down. After all, President Joe Biden — a longtime friend and ally of the governor — said in March that if the stories are confirmed, Cuomo should resign, and will likely “end up being prosecuted, too.”

In contrast to much of the speculation about the James report, the Assembly’s impeachment probe has inspired doubts about just how aggressive it will be as it covers some of the same ground. Several of the women who accused Cuomo of harassment and their advocates have declined to participate in the Assembly probe, saying the chamber has historically shown itself ill-equipped to handle complaints of sexual harassment against its own members.

And a possible end of the impeachment investigation seems far off — potentially more distant than James’s. The Judiciary Committee announced on June 30 that it would begin issuing subpoenas but members say that doesn’t mean it is close to completing the review, which reportedly is wider in scope, considering sexual harassment allegations, misuse of resources to write his personal memoir, potentially withholding information on both Covid-19 nursing home deaths and the safety of the Hudson River bridge he recently named after his father. The speed at which the Assembly moves may also depend on what James finds.

In a more practical sense, the waiting will soon nudge up against planning for a potential 2022 primary.

Several names, including that of James herself, have been floated as potential Democratic nominees should Cuomo be impeached or choose not to run again, but that list so far has little overlap with those who might actively challenge the incumbent. Cuomo has signaled he remains committed to the fourth term run he declared in 2019, most recently with a $10,000 per plate fundraiser June 29 and a virtual “grassroots reception” July 6 to grow the $16.8 million he had in his war chest in January.

Voters so far appear mixed regarding Cuomo’s future. Though his popularity hasn’t shifted much recently, 23 percent of registered voters in a recent Siena poll said he should “resign immediately.” A total of 39 percent said he should “serve out his term but not seek reelection next year” while 33 percent want him to “continue to serve out [his term] and run for reelection next year.”

Most voters have probably made up their minds on Cuomo one way or another, regardless of what the investigations conclude, Langworthy said. In other words, they’re the only ones not waiting at all.