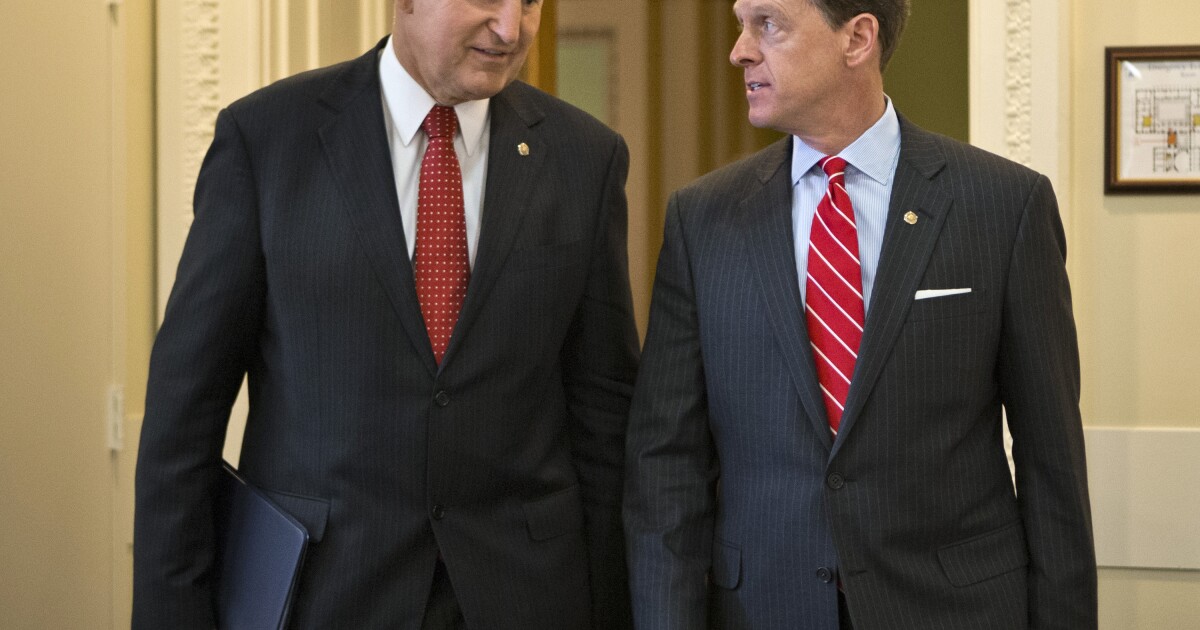 Nobody was more sensitive to the political peril of gun control than Sen. Joe Manchin III, a Democrat from deep-red West Virginia and a proud gun owner. But standing on the Senate floor five months after 20 children and six adults were gunned down in Newtown, Conn., he told colleagues this was “a defining time in public service” — a moment to ignore those risks.

He refuted the gun lobby’s objections point by point. He mourned those lost to firearms. He was at turns folksy and forceful but always pleading.

Manchin’s measure to expand background checks for gun sales — the most prominent legislative efforts of his early Senate career — failed, despite months of negotiations.

Eight years later, the episode has new relevance in understanding the centrist Democrat, who holds tremendous sway on the fates of infrastructure spending, voting rights and other elements of President Biden’s agenda. As everyone in Washington tries to understand what makes Manchin tick, his work on guns in the aftermath of the massacre at Sandy Hook Elementary School offers a window into his approach to taking on the thorniest issues.

Those who worked with him closely said the 2013 proposal shows that Manchin’s desire for consensus has enabled him to build genuine trust with Republicans, necessary for brokering major deals today. It also displays other tendencies — his fervent belief that pragmatism will win out over politics, his unwavering reverence for Senate tradition — that now baffle many in his party who are impatient for legislative wins and have virtually no expectations of GOP cooperation.

That frustration is most acute over the Senate’s filibuster rule requiring 60 votes for a bill to pass — a tradition Manchin staunchly defends, despite growing calls from the left to eliminate or change it. The filibuster was the reason Manchin’s background-check bill failed, despite getting support from 55 senators, including four Republicans — one of whom, Sen. Patrick J. Toomey of Pennsylvania, was a co-sponsor.

“The right lesson to draw from this is it’s simply an impossible task right now to get to 60 votes on issues that are even remotely controversial,” said Adam Jentleson, who was a top aide to former Senate Majority Leader Harry Reid (D-Nev.). “It’s hard to see how you can do the process any better than [Manchin] did. If you don’t take away the lesson that the system needs to be fixed, I don’t know what to tell you.”

Manchin, whose office declined an interview request, was an unlikely face for the post-Sandy Hook gun-safety efforts. In a 2010 campaign ad, the former West Virginia governor famously shot a hole through President Obama’s bill on climate change.

The 2012 Sandy Hook slaughter jolted Democrats from their wariness about broaching gun control. Though the White House and a number of Democratic senators took up the issue, most of the focus settled on Manchin, whose then-“A” rating from the National Rifle Assn. gave him credibility with some gun enthusiasts.

“When you’re on my team, I’m going to pay attention to you,” said Richard Feldman, a former NRA lobbyist whose group Independent Firearm Owners Assn. worked closely with Manchin on the effort.

Manchin’s decision to carry the measure, despite it offering no political upside, underscores his inclination to be in the mix on major issues, which has only amplified his role today as a decisive vote in an evenly divided Senate.

“Here’s a knotty issue — let’s head toward it instead of run away from it,” said Jim Kessler, vice president of policy for the centrist think tank Third Way, summing up Manchin’s philosophy.

The expansion of background checks was supported by 90% of Americans after Sandy Hook. Manchin took pains to describe his proposal as limited, pointing out that it targeted certain commercial transactions.

The agreement was announced in April 2013, months after the massacre, a delay that even Manchin admitted drained momentum from the bill. The approach was quintessential Manchin: Meet with any and all interested parties in hopes of getting them onboard, a sometimes exhaustive process and a tactic he continues to employ on deeply polarized issues such as voting rights.

“He at his core believes that people want to do the right thing, and that if we just got people talking together and got politics out of it, he could get it done,” said Jonathan Kott, a former top aide to Manchin. “Some people say that’s naive. I say he’s the most optimistic person I’ve ever met.”

Manchin’s talks eight years ago showed glimmers of hope of winning over gun rights groups, offering them multiple concessions. But the NRA ultimately campaigned hard against the measure, dooming its prospects.

Knowing victory was unlikely, Manchin urged his colleagues on the day of the vote to rise above partisan pressures.

“There is a time in our life … a time when you have the ability to stand, when you know the facts are on your side, and walk into the lion’s den and look that lion in the eye and tell that lion, ‘Listen. Not today,’” he said.

Despite his plea, most Republicans and a handful of conservative Democrats voted no, blocking the measure from clearing the 60-vote threshold. (Manchin continues to make public appeals for cross-party cooperation; his urging of Republicans to support a bipartisan commission to investigate the Jan. 6 attack on the Capitol was unsuccessful.)

At a news conference after the gun vote, Manchin vowed to families of victims of gun violence that he would keep trying.

“It was one of the most soul-crushing things we ever participated in,” said Kott. “He walked back to the office and said, ‘How do we get five more?’ He went from losing this vote to, within an hour, saying, ‘OK, who else can I talk to?’”

The background-check proposal never regained momentum. There still has been no significant gun control measure passed in decades, and Manchin has dismissed current, broader measures passed by Democrats in the House.

“The possibilities of bipartisanship don’t come from being nice to people alone. It comes from the prospect you could hurt them so much worse if you wanted to, and you’ll consider it,” said the advocate, who works closely with Manchin and requested anonymity to maintain that relationship. “If you tell them upfront you won’t consider it, under any circumstance, you take away all your leverage.”

As some on the left grow restless to pass their legislative priorities, they have pointed to the 2013 episode as evidence that Manchin’s style is fundamentally flawed.

Manchin and co-sponsor Toomey “convinced the whole political class that they had magic gravitas on this issue to show that the legislative process in the United States Senate can be trusted to work to do at least the smallest imaginable thing on an issue of overwhelming public concern,” said MSNBC host Rachel Maddow in March. “They were wrong. They could not even do that one pitiful thing.

“The United States Senate does not work, in large part because of Democrats like Joe Manchin,” she added, pointing to his continued support for the filibuster.

Jentleson — whose book “Kill Switch: The Rise of the Modern Senate and the Crippling of American Democracy” cites the failure of the Manchin-Toomey proposal in his case against the filibuster — is more sympathetic in his view of Manchin but says the West Virginian should know better than anyone how that rule undermines bipartisan work.

Even in the wake of the 2013 vote, Manchin declined to fault the filibuster. He told reporters at a Wall Street Journal breakfast the day after its failure that he was “still pretty protective” of the rule, explaining, “If we can’t come together in the Senate as Americans … we have serious problems, and right now, we haven’t done too well … about that.”

That veneration of the bipartisan process, even at the expense of his own bill, helps explain why — so far — Manchin has stuck with the filibuster rule. While the left ramps up the pressure on him to change his mind, some conservatives who worked closely with Manchin eight years ago hope desperately that he doesn’t.

“Busting the filibuster would be extremely partisan. … It’s a ‘take no prisoners’ approach to legislation that just divides America that much more, and eventually all hell is going to break loose,” said Alan Gottlieb of the Second Amendment Foundation. “I don’t think any of us want to see that. I don’t think Manchin wants to see that.”