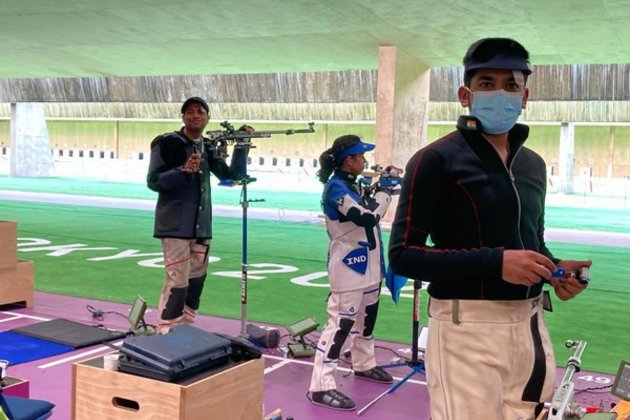 Tokyo [Japan], July 19 (ANI): Four days ahead of the upcoming Olympics, the Indian shooting contingent on Monday began their training here in Tokyo.

The official Twitter handle of the National Rifle Association of India (NRAI) posted pictures of the shooting contingent resuming their training and it captioned the post as: “The guns they are a blazing again. indianshootingteam practising at the 50M range.”The athletes and seven support staff have all been accorded twin-sharing rooms and the shooting contingent spent Sunday exploring the village, collecting their gifts, visiting selfie-points and welcoming their compatriots from other sports, besides catching up on much-needed rest.

“The rifle team has booked a bus for 6.55 am in the morning to go for practice,” said senior Rifle shooter Sanjeev Rajput. “It’s time to go check out the range,” he added.

“The team has settled down well in the village. The atmosphere is good and we are enjoying some much-needed rest after a long journey. We look forward to beginning training from Monday,” said National Rifle coach Deepali Deshpande.

Earlier, shuttlers PV Sindhu and Sai Praneeth hit the court running on Monday and they trained alongside coach Park Tae Sang. Paddlers Sharath Kamal and Sathiyan Gnanasekaran also started their training and they were seen battling it out on the table tennis court.

The Indian contingent that departed for Tokyo from New Delhi on July 17, after an official send-off at the Indira Gandhi International Airport, safely reached Japan and checked into the Olympics Games Village.

All 88 athletes underwent Covid-19 testing at the airport and were found to be negative. Their PVC cards were also validated at the airport.

A total of 127 athletes across 18 sports disciplines from India will be heading to Tokyo. This is the biggest-ever contingent India is sending to any Olympics. The 69 cumulative events across the 18 sport disciplines that India will participate in are also the highest ever for the country.

Tokyo Olympics will run from July 23-August 8. The mega event was slated to be held last year, but it had to be postponed due to the Covid-19 pandemic. (ANI)

ILA | When Seconds Count, the Police are Only Hours Away
Biden and Pelosi Give Wrong ‘Facts’ About ‘Assault Weapon’ Ban
Outdoors calendar (through Aug. 27): What to see and do in Western New York | Outdoors
Maloney, Nadler, Patel: Where candidates for NY-12 stand on guns, SCOTUS, inflation and more
Where is the Republican courage on banning assault weapons?