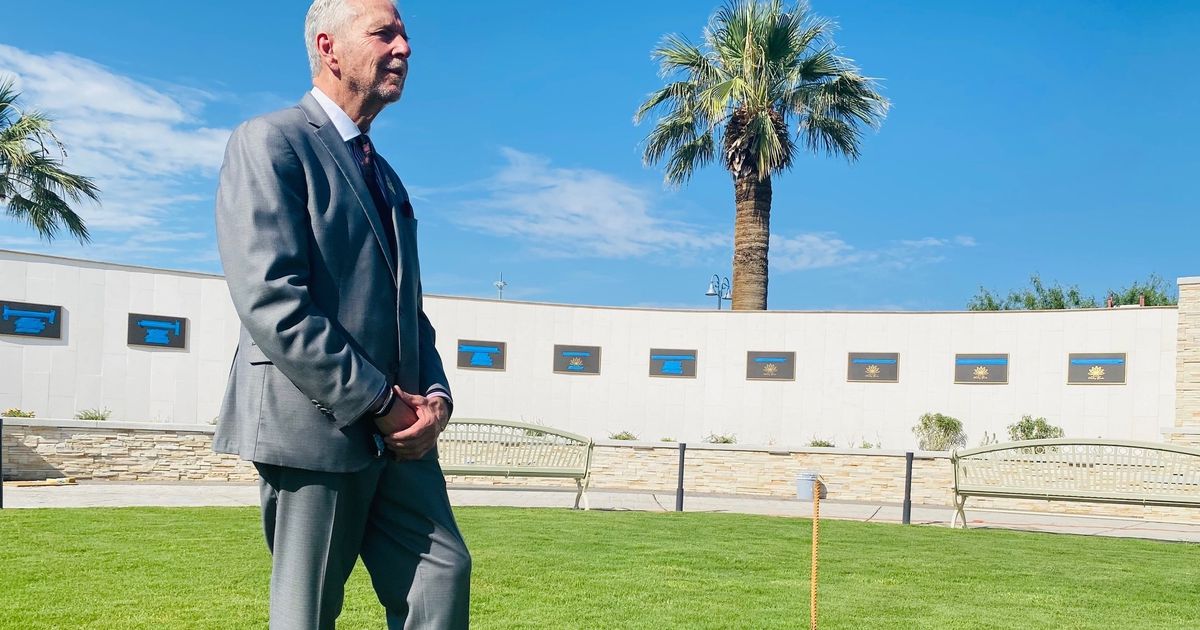 EL PASO — Ricardo Samaniego, the El Paso County judge, walked in high spirits past the construction underway. The former mental health therapist carefully examined the final details of what he called a healing garden for victims of the Walmart mass shooting two years ago.

He pointed to the circular garden, calling it a form of an embrace, and the 23 Italian cypress trees freshly planted by family members, one for each victim of one of the nation’s most horrific hate crimes and the biggest attack against Mexicans and Mexican Americans in modern history. Samaniego said he hopes the garden will provide the community, especially relatives of the victims, solace, healing and comfort that they “didn’t die in vain, that this is something more transformational.”

But when asked where the city, state and country are following the Aug. 3, 2019, massacre in which 23 people lost their lives and dozens were injured, Samaniego paused and added, “We’re slow to act, and we’re slow to learn.”

Two years after alleged shooter Patrick Crusius drove 10 hours from Allen to El Paso to “stop the Hispanic invasion of Texas” — part of a racist online screed he wrote, echoing the Great Replacement theory, as well as then-President Donald Trump and rhetoric from some Texas Republicans — the conditions and rhetoric that propelled him have only heightened.

This is especially the case in Texas, where once-contrite politicians are now emboldened, their political promises broken. Even gun laws have since been loosened more, making it more possible for just about anyone over age 18 to purchase a gun.

“There was a brief moment after the shooting where Republican leaders who had used inflammatory language seemed to back down and even express a little remorse,” recalled U.S. Rep. Veronica Escobar, a Democrat from El Paso, a predominantly Hispanic community of some 800,000 people. “That very brief moment of humanity and compassion has disappeared.”

Since the killings, an additional 90 mass shootings have occurred across the United States, resulting in 362 deaths and 226 injuries, according to data from the Gun Violence Archive, a nonprofit corporation that tracks gun-related violence. Texas is the state with the most mass shootings in those two years, with 13 accounting for 14% of the total.

“August 3rd was not the only mass shooting that occurred in this country, and unfortunately, it won’t be the last,” said Jaime Esparza, who served as El Paso County’s district attorney for 28 years and is now a candidate for U.S. attorney general for the Western District of Texas.

Families of three of the victims declined to comment on the second anniversary, saying emotions remain raw and memories painful.

Meanwhile, Crusius, who just turned 23, remains in jail in El Paso. He has pleaded not guilty to state and federal murder charges, including 90 counts under federal hate crime and firearms laws.

Crusius’ next hearing date in federal court was moved this past week to Nov. 18 from Aug. 3.

On Thursday, El Paso County District Attorney Yvonne Rosales said in a brief meeting with reporters that the pandemic has delayed jury trials. But like her predecessor, Rosales, who took office in January, said her team is “still seeking the death penalty” and is “working very diligently” to prepare for a trial date. She also said her office is seeking for the trial to be held in El Paso.

The cost associated with Crusius’ detention, including lawyers and psychiatrists, is expected to add up to millions of dollars — paid for by El Paso taxpayers.

Calls placed to one of Crusius’ lawyers, Joe Spencer, were not returned.

The border region will mark Tuesday’s grim anniversary with multiple events planned over the weekend, including rows of lighted luminarias hosted by the El Paso United Family Resiliency Center (FRC) to honor the victims. Additionally, on Tuesday, El Paso’s iconic star on the mountain will flash 23 times, once for each of the victims. Organizers hope the moment will serve as a reminder of the hate crime in El Paso and a plea for an end to violence.

But political tensions, anti-immigrant rhetoric and fear-mongering are exploding. Gov. Greg Abbott recently likened immigrants to invaders, in a sharp contrast from the somber, apologetic tone he took just after the killings.

In a meeting in El Paso just days after the massacre, Abbott conceded “mistakes were made” after sending potential donors a fundraising letter that warned Republican supporters of the dangers posed by unauthorized migrants entering the Texas border from Mexico.

In calling for a safety commission meeting in El Paso in August 2019, Abbott said the plan was to “generate ideas to help the community heal, combat the rise of extremist groups and hateful ideologies, keep guns out of the hands of deranged individuals and combat terrorism in Texas.”

Abbott pledged to do “everything we can to make sure a crime like this doesn’t happen again.” He called for new policies to keep guns out of the hands of criminals and others who should not possess them. Lt. Gov. Dan Patrick even said he was “willing to take an arrow” from the National Rifle Association and vowed to pursue stronger background check laws.

In June, Abbott signed a law that will allow Texans to carry guns without permits or training. The law goes into effect in September.

On immigration, in May, Abbott issued an executive order that declared a disaster in the state because of the influx at the border of immigrants, some of whom sought asylum. He took a page out of Trump’s playbook and likened those arrivals to an invasion.

“Homes are being invaded,” Abbott said in June after announcing an initial $250 million down payment in state money and a crowdsourcing campaign to build a wall. However, Texas doesn’t have jurisdiction to enforce immigration laws because they’re the sole responsibility of the federal government.

Republicans across the country have sharply criticized the Biden administration for creating what they say is a crisis, an increase in the number of migrants arriving at the border to a level not seen in 20 years. Several have made trips to the border, posing for photos by the wall that was constructed during Trump’s time in office. In late June, Abbott toured the border with Trump, who endorsed the governor in his bid for reelection.

Last week, Abbott sent out the Texas National Guard to protect the border and later issued another executive order, authorizing the Department of Public Safety to impound vehicles used to transport migrants who “pose a risk of carrying COVID-19 into Texas communities,” said Abbott. He later reiterated he will not allow local communities to set their own guidelines for protecting themselves against the resurgent pandemic.

On Friday, the Justice Department filed suit against the state to stop enforcement of the migrant transportation order.

Escobar has watched suspiciously as events have unfolded over the past two years.

“I knew from the beginning this was all a farce,’’ she said Friday of Abbott and Republicans, adding, “They know their xenophobic, racist rhetoric fuels hatred, and they know full well that hatred fuels violence. And who are the victims of the violence? We have seen in Texas that they are vulnerable communities like ours, communities of color.”

Asked whether Abbott was invited to the solemn ceremony Tuesday at the healing garden, Samaniego, the county judge, said, “Not by me. Somebody else might, but this is my initiative, so I have the right to invite people.”

A spokeswoman for Abbott declined to answer specific questions but said the governor plans to issue a statement this week.

Hours after the mass shooting took place, the slogan “El Paso Strong” became a symbol for the borderland community.

Ruby Montana, an assistant professor of humanities at the University of Texas at El Paso, volunteers at The Proper Print Shop, a local store owned by Alan Hodson. He and a borderland artist, Mónica Monarrez from Viva la Mocha, created and sold the iconic T-shirt with white letters, “El Paso Strong,” and a yellow star in the middle. Profits totaling $160,000 were used to support victims and their families.

Two years later, Montana remembers those days when people showed up to support the victims.

“It was more than about getting that shirt; it was about giving their money to the victims. There were a few times where several of us would just break down crying, not from just the grief and the loss of life, but also from just the outpouring of support that was beautiful to see as well. It was perhaps a silver lining in such a horrific atrocity to see the community rise and come together,” said Montana.

Similarly, the Family Resiliency Center opened its doors on Dec. 19, 2019, offering a place of healing and support dedicated to serving those directly and indirectly affected by the tragedy in English and Spanish. But months after the pandemic hit, the center had to close its doors and went online.

“People called to the center and said, ‘I feared for my life because I’m Hispanic or I’m dark-skinned. Oh my God, this is happening again. I’m a target,’” recalled Idalhí Huizar-Mendoza, director of the FRC.

Samaniego has emphasized that instead of focusing on the reasons or motives for the shooter to commit this attack, it’s essential to focus on the community’s healing process and turn El Paso’s mourning into unity and healing with mental health help. Hence, the “Healing Garden” that Escobar is lobbying to turn into a National Memorial.

Others think that it is necessary to focus on both healing and reasons behind the attack.

“I mean, if we don’t call it what it is, if we don’t say that this was the result of betrayal, racism and white supremacy, then we’re not doing any healing,” said Fernando García, executive director of the Border Network for Human Rights. “There’s not going to be healing until we deal with these systemic evils.”

The lack of accountability and remembrance worries both Samaniego and Escobar, who was in El Paso when the Walmart attack took place and inside the U.S. Capitol on Jan. 6 when a mob stormed inside and she and other congressional leaders had to be escorted out for their safety.

“There is absolutely a through line [between both events], and I have said before, words have consequences,” she said. Worse, she added, politicians know the consequences and continue to stoke fear.

“I hate to look back,” Samaniego added, “but I think if we had analyzed what happened here on August 3rd as a possibility that it could happen again, maybe our country could have learned something about dealing with the hatred around us.”