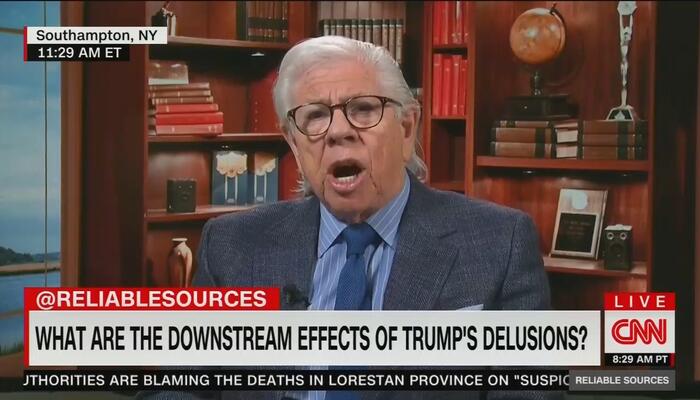 It’s been a busy summer of hate for liberal journalists. When they weren’t cursing Republicans for their election “rigging” “American Apartheid”  tactics, they were condemning them as a “domestic terror threat” who supported “war criminal” Donald Trump.

This past month saw MSNBC’s Nicolle Wallace paint the Republican party as a “domestic-terror threat,” the New York Times’ Katie Benner trashing Trump-supporters as “enemies of the state” and CNN’s Carl Bernstein blast the “war criminal” Trump. But don’t worry, Bernstein said this on CNN, whose digital officer claimed was “not an opinion network.”

As the temps increased, lefty journos rang their clarion call of climate change alarmism too. One New Yorker scribe even lectured that the “burning of fossil fuels kills about 10 million people every year, which is dying on the scale of the Holocaust.”

Hollyweird types got into the act, as well. Actor Sean Penn was pained by his flashbacks of the Trump administration’s “gunning down” the “most vulnerable” and singer David Crosby wanted Fox founder Rupert Murdoch to be “taken out and shot.”

The following are the most obnoxious outbursts by lefty journalists and celebrities from the month of July:

Hilarious Laugh Line: CNN Is “Not An Opinion Network”

“I don’t think anyone who’s looking for deep lib would seek out CNN. It’s just not what we do. But no, it’s not going to be ideological. We’re just not in that game. We’re not an opinion network, we’re a news network.”
— CNN chief digital officer Andrew Morse discussing CNN’s new streaming platform as aired on Variety’s “Strictly Business” podcast, July 19.

“He is our own American war criminal of a kind we’ve never experienced before….Trump’s crimes as an American war criminal in his own country that he has perpetrated upon our people, including the tens of thousands of people who died because of his homicidal negligence in the pandemic, putting his own electoral interest above the health of our people as they were slaughtered in this pandemic.”
— CNN political analyst and former Washington Post editor Carl Bernstein on CNN’s Reliable Sources, July 25.

“I think the security questions of the Republican party as a domestic-terror threat….should be front and center for the Democrats in these midterm elections.”
— Host Nicolle Wallace on MSNBC’s Deadline: White House, July 29.

Time to Declare Trump Supporters “Enemies of the State”

“Today’s #January6thSelectCommittee underscores the America’s current, essential natsec dilemma: Work to combat legitimate national security threats now entails calling a politician’s supporters enemies of the state.”…
“As Americans, we believe that state power should not be used to work against a political figure or a political party. But what happens if a politician seems to threaten the state? If the politician continues to do so out of office and his entire party supports that threat?”
— July 27 tweets by New York Times reporter and MSNBC contributor Katie Benner. Benner deleted the tweets later.

GOP’s “Brown Shirts” Have Put U.S. in “Most Perilous Point” Since Before Civil War

Former ABC News chief political analyst Matthew Dowd: “January 6th was worse than 9/11 because it’s continued to rip our country apart and give permission for people to pursue autocratic means and so I think we’re in a much worse place than we’ve been and, as I’ve said, I think to you before, I think we’re in the most perilous point in time since 1861 in the advent of the Civil War.”
Host Joy Reid: “I do too. I do too. And it — it frightens me. You know what scares me most, Matthew, is that I’m not sure that most Democrats — at least most elected Democrats in Washington — agree with us….It looks directly like fascism. It looks like Mussolini’s Italy, the brown shirts, the — the violence against our Capitol, the attempts to overthrow the government, the centering of the white citizens that happen to be the top citizens or else the country dies and to see a Republican party either because of cowardice or because they agree with it, say ‘we’re going to go with that….If that’s what it takes for us to have power, then fine, we’ll take fascism.’”
— MSNBC’s The ReidOut, July 6.

GOP Would Hang Mike Pence, If Trump Said To

“If Donald Trump decided tomorrow to wage a campaign to make ‘hang Mike Pence’ a litmus test for the Republican Party, the vast majority of Republican officeholders would get behind hanging Mike Pence and that’s a grim, dark ass thing to say but it is the GD truth right now. It is that bad, I really truly believe that.”
— Host Chris Hayes on MSNBC’s All In, July 5.

“When it comes to the Supreme Court, I’m terrified that the Supreme Court may actually overturn Roe v. Wade. I know this argument has been going on for a long time. There’s a real live handmaiden on the Supreme Court. It feels like we’re 10 minutes from living in Gilead. Do you think the Supreme Court will take up this case and potentially overturn a law that was so consequential in 1973?”
— Substitute host Tiffany Cross comparing Supreme Court Justice Amy Coney Barrett to characters on Hulu’s The Handmaid’s Tale as aired on MSNBC’s TheReidOut, July 23.

Eager to Live in “Barbie Dream House” of Socialism

“This is the kind of spending bill that could break records. It has the child tax credit, it has free pre-K, it has expanded Medicare benefits, clean energy. It is the Barbie DreamHouse of improvements to the human condition. We all want to live in that Barbie DreamHouse, but how are we going to pay for it?”
— Host Stephanie Ruhle on MSNBC Live, July 15.

Correspondent Manuel Bojorquez: “Demonstrators here say they are fed up by food shortages, rising prices, collapsing infrastructure, and the government’s response to a rising number of COVID-19 infections. On Saturday, Cuba recorded nearly 7,000 new cases. On Cuban television, Miguel Diaz-Canel blamed the protests on the U.S. and its trade embargo for a severe impact on Cuba’s recent economic downturn.”
CBS News producer Portia Siegelbaum: “The Trump administration passed many more regulations, many more sanctions against it, which basically has cut off all income coming into Cuba….I think the Biden administration, he at least said at the beginning he was going to review this policy and make changes. But nothing has happened.”
— CBS This Morning, July 12.

Republicans Are Usually Wrong, But There’s No Liberal Bias

“We should have fought back better in the mainstream media. We shouldn’t [have] accepted the premise that there was liberal bias. We should have defended. I hear the attacks on fact checkers where they ‘fact-check Republicans six times more than they fact-check Democrats.’ Yeah. Perhaps the Republicans are being factually incorrect more often than the Democrats. We ended up in this both-sides trope. We bought into the idea that, ‘oh my God, we’re perceived as having a liberal bias.’ And I think for particularly the first decade of the century, I’d say mainstream media overcorrected. And we bought into the Fox motto of ‘balance.’ And it’s like, Jesus, there’s no balance, they need the truth.”
— NBC’s Meet the Press host Chuck Todd in July 27 interview with TheVerge.com.

Feeling Shame at Sight of American Flag at Olympics

“I love the opening ceremonies. March of countries. Then I realized, you know, man, particularly after the last four years, I had it wrong. Nationalism is not good. We’ve seen the rise of white nationalism. Nationalism is not good. And also, this whole idea — I keep thinking back on the Capitol riots, and I saw a lot of, you know, U.S. flags….So now when I see the flag and the flag raised, what — what, what, what America am I living in?”
— Former New York Times columnist Bill Rhoden on CBS This Morning, July 26.

“Compared with other icons of national identity, it is ambiguous and ambivalent. As familiar to some Americans as the flag, the statue is just as meaningless or foreign to others, a sign without significance, or worse, a symbol of hypocrisy or unfulfilled promises…The noble sentiments of the poem by Emma Lazarus — ‘give me your tired, your poor, your huddled masses yearning to breathe free’ — were all but effaced in the past four years of strident and often violent anti-immigrant sentiment.”
— Washington Post art critic Philip Kennicot in July 3 column “Maybe it’s time to admit that the Statue of Liberty has never quite measured up.”

When In Doubt, Blame Climate Change!

“Much of our collective attention this past week has been focused on the horrific building collapse in Surfside, Florida….While it’s still too soon to know the precise cause or triggering event for the collapse, the structure seems to have been stressed over time by king tides that come from rising sea levels….So who could have seen this coming? Pretty much anyone who paid attention to the science. But instead we’ve seen decades of political foot-dragging by climate change denialists.”

Put Progress on Hold, Until We Solve Climate Crisis

Co-host Alysin Camerota: “Billionaire Richard Branson beat billionaire Jeff Bezos in the race to space. What does that mean for the rest of us? And for planet Earth? If space is now open for business, how does that affect the climate crisis we’re all experiencing?”…
Co-host Victor Blackwell: “With all the troubles on Earth right now from a pandemic to the wildfires, all we’re seeing the results of impact of climate change. What’s the value of spending so much money and fossil fuel to put rich people into space?”
— CNN Newsroom, July 12.

Filling Your Tank Up = Deadlier Than the Holocaust

“Estimates suggest the burning of fossil fuels kills about 10 million people every year, which is dying on the scale of the Holocaust — in fact, larger than the Holocaust — every single year. And yet we don’t see many public health stories, we don’t see many moral crises stories addressed to that issue.”
— The New Yorker Editor-At-Large David Wallace-Wells on CNN’s Reliable Sources, July 4.

“The Second Amendment really was the right to bear arms was designed to protect slavery, right, because they wanted our Founding Fathers and others, they wanted to be able to empower a local militia group to basically put down a slave revolts and protect plantation owners, and so because of the origins of the Second Amendment many and because of the NRA, I think we’re seeing this proliferation of guns and gun ownership.”
— Co-host Sunny Hostin on ABC’s The View, July 23.

“This [accusations of Vice President Kamala Harris’s office being an abusive workplace] will be used by the right wing to attack the Biden administration, and isn’t it interesting that they go after a black woman? They don’t go after a white guy Joe Biden as much because Joe Biden looks like the base on the right. He looks like them. So it’s hard for them to, like, get mad at him because then they get mad at themselves, you see?”
— Co-host Joy Behar on ABC’s The View, July 1.

Trump Was “Gunning Down” the “Most Vulnerable”

“When my team and I would come home from test and vaccination sites at night, particularly during the testing period during the Trump administration, to maddening news — it really felt like there was someone with a machine gun gunning down communities that were the most vulnerable from a turret at the White House.”
— Actor Sean Penn on July 10 promoting a new movie at Cannes Film Festival as reported by Variety.

“There are a lot of really stupid people in the world and that many of them are in power and that the rest are being fed a whole shitload of absolutely untrue shit. Rupert Murdoch should be taken out and shot. The people on Fox are doing great harm to the human race. What can I say? They’re lying for money. So, it feels hopeless.”
— Singer David Crosby in July 27 Daily Beast interview.