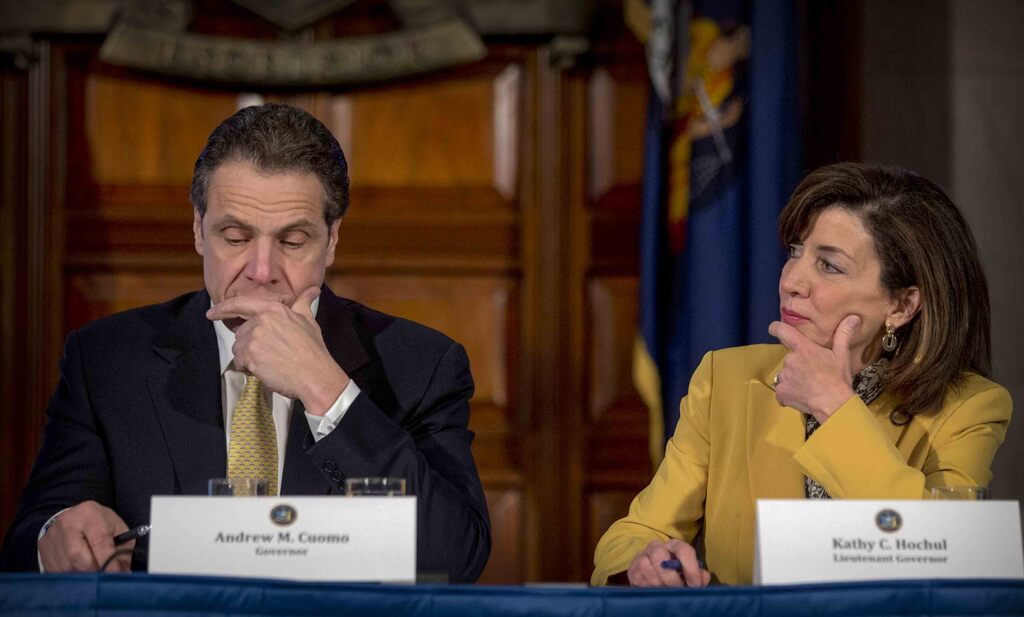 NEW YORK — After months of holding on to power amid sexual harassment allegations and defying calls to resign, New York Gov. Andrew Cuomo abruptly did just that Tuesday. With Cuomo on his way out, Lt. Gov. Kathy Hochul is ascendant.

We take you through the major players, what’s happened this week and what’s next for Cuomo, Hochul and the state of New York:

What was Cuomo accused of?

Cuomo was under investigation for several things, but the prevailing issue leading to his resignation concerned sexual harassment allegations that ranged from inappropriate comments to groping. An investigative report released last week said he sexually harassed 11 women,  many of whom had worked for him or the state. Other issues in play in a state Assembly impeachment probe: how his administration handled data on COVID-19-related deaths in nursing homes, his $5 million  pandemic leadership book deal and whether friends and relatives were given special access to COVID-19 tests early in the pandemic.

Cuomo said he wasn’t going anywhere. Why did he resign now?

Cuomo has denied the most serious allegations against him and acknowledged Tuesday that his “instinct is to fight.” But he said the impeachment process would take months and consume resources that should go toward “managing COVID, guarding against the delta variant, reopening upstate, fighting gun violence and saving New York City.”

So who’s the governor of New York now?

How do you pronounce Hochul?

What else do I need to know about Kathy Hochul?

In sum: Buffalo-area native. Age 62. Democratic ex-congresswoman. Once had a good rating from the National Rifle Association and threatened to jail unauthorized immigrants who tried to legally apply for driver’s licenses. Now supports gun control and letting unauthorized immigrants drive. Unknown quantity to much of the state, but popular among party leaders. Oh — and the first female governor of New York (well, in two weeks).

As Hochul told it Wednesday,  “it’s very clear that the governor and I have not been close, physically or otherwise.” Hochul spent much of her time crisscrossing New York as part of her duties as lieutenant governor. Cuomo chose her as his running mate while pursuing his second term, in 2014, but she was never part of his inner circle — and isn’t mentioned in the report.

Why is Cuomo waiting 14 days to leave?

Cuomo said he wanted to ensure a “seamless” transition to the new administration. He declared Hochul could be caught up to speed in a timely fashion.

Hochul will appoint her replacement. She wouldn’t reveal her pick for the job, but nodded to the need for diversity and inclusion and said she would “name someone that I believe the state will be familiar with.” Until her pick is in place, Senate Majority Leader Andrea Stewart-Cousins would be next in the line of succession if Hochul had to leave office.

How powerful is a lieutenant governor?

Not very. Think of the role more as second-in-line rather than second-in-command.

Is Hochul going to keep Cuomo’s staff and advisers or will she clean house?

This is a key question, as the investigative report alleged that Cuomo’s office that created a toxic workplace culture. Without naming names, Hochul said that no one the report identified as doing anything unethical will be sticking around. Some major Cuomoworld figures, like top aide Melissa DeRosa, have already tendered resignation. Hochul said Wednesday she’d meet with Cabinet members in the next day before making any decisions on that front.

What’s going on with the nursing homes investigation?

The U.S. Department of Justice has been investigating how the state handled data  related to nursing home deaths during the coronavirus pandemic. The state’s official tally left out many people who had died at hospitals. An aide said Cuomo’s administration worried the true numbers would be “used against us” by President Donald Trump’s administration.

Once Cuomo leaves office, will he be safe from charges?

Prosecutors in Albany, Westchester and on Long Island have already said their investigations into whether Cuomo committed any crimes will continue. Cuomo might be hoping that prosecutors or the women who complained about his behavior might lose interest in pursuing a case now that he’s out of office.

What about civil penalties?

The women who have accused Cuomo could still file lawsuits, and at least one — Lindsey Boylan — has said she will.

Can Cuomo still be impeached?

It’s currently unclear whether the state Assembly can — or will — continue the probe and draw up articles of impeachment once he’s out of office. And lawmakers already said the process would take weeks, making it unlikely it would wrap up in Cuomo’s last two weeks in office.

Does Cuomo have regrets?

He “deeply, deeply” apologized to the “11 women who I truly offended.” But he continued to deny the most serious allegations outlined in the report and again blamed the allegations as misunderstandings attributed to “generational and cultural differences.” Last week, he personally said sorry to two accusers — ex-aide Charlotte Bennett and a wedding guest  he was photographed kissing, Anna Ruch. On Tuesday, he added the unnamed New York State Police trooper who said he inappropriately touched her to the list.

Sure. There’s nothing currently precluding him from throwing his hat in the ring for 2022. And although his donations dipped in the wake of the initial allegations, he had amassed an $18 million war chest as of mid-July. If he were to be impeached somehow, however, he could be barred from seeking statewide office again.

Is there an election next year?

Indeed. Cuomo would have been up for a fourth term next year. No high-profile Democrats have declared their candidacy yet, but U.S. Rep. Lee Zeldin and Andrew Giuliani — yes, son of Rudy and another New York political scion named “Andrew” — are among the Republican contenders.

What can Cuomo actually do in the next 2 weeks?

It’s unclear how engaged he’ll be in public policy in his final days, but the state is dealing with a soaring number of COVID-19 cases and has been struggling to get aid to tenants who fell behind on rent because of the pandemic.

Is Chris Cuomo going to talk about this?

We’re not expecting an appearance — let alone, a comment — from Chris Cuomo on his primetime CNN show this week, as he’s currently on vacation. The younger Cuomo brother’s role advising the governor was detailed in last week’s report,  and he didn’t comment on that, either. The sons of the late Gov. Mario Cuomo were known for their on-air fraternal banter during the early days of the pandemic, but CNN eventually put the kibosh on the anchor covering his own brother.

Where will Cuomo live?

He only moved to the governor’s mansion in Albany in 2019. He previously lived with his ex-girlfriend, TV chef Sandra Lee, in the New York City suburbs. Lee owned that house. It remains to be seen where the now-single Cuomo — and his dog, Captain — will crash.

Matt Gaetz urges colleagues to abolish the ATF before it strips Americans of gun rights: ‘Cannot be trusted’
Illinois loses appeal over gun control law, leaving restraining order in effect
Pro-gun judge targeted by Newsom might have the Supreme Court on his side
How to avoid an avalanche — and ruin a date
ILA | Federal Court Issues TRO Preventing New Jersey From Enforcing New “Sensitive Place” Laws