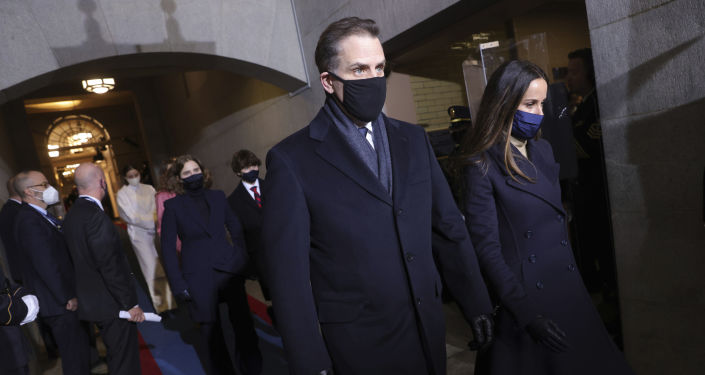 Earlier, social media giants Facebook and Twitter were blasted after it became clear both platforms were deliberately disabling the sharing of articles regarding a missing laptop and emails said to belong to US President Joe Biden’s son, Hunter. At the time, officials explained the move as part of an effort to limit the spread of misinformation.

Months after being blasted for having intentionally limited the sharing of articles tied to Hunter Biden, Facebook is at it once again, but this time the focus isn’t on reports from the New York Post. Now, it’s all about an exclusive report released by the UK’s Daily Mail.

The story at the center of this latest case was published on Wednesday and centers around newly surfaced video footage of a naked Hunter Biden in bed with an unidentified woman who is described as being a “prostitute.”

In the footage, Biden is heard claiming that “Russian drug dealers” stole one of his laptops as part of a blackmail scheme when he was parktaking in illicit drugs during a 2019 stay at an unspecified hotel room in Las Vegas, Nevada.

The story, especially in light of the fact that footage was pulled from a laptop owned by Biden, raises strong similarities to the October 2020 case in which the New York Post shared an exclusive story purporting to reveal Biden’s 2014 invocation of his father’s name during business dealings in Ukraine.

Although both platforms later backtracked, it seems at least Facebook is now back to its old ways of censoring content linked to the Biden White House, specifically the Biden family.

Garland Nixon, a host on Sputnik Radio’s Critical Hour who also happens to serve on the national board for the American Civil Liberties Union, recently found out that Facebook was back to its old practices the hard way – when he was put in Facebook jail for three days for sharing that Daily Mail exclusive.

Screenshot provided by Garland Nixon shows the account notification issued by Facebook moments after he shared a post regarding the Daily Mail’s exclusive coverage on Hunter Biden.

“I put it up and didn’t think anything of it,” Nixon recalled, detailing that the Facebook post didn’t include any offensive remarks, just a note harking back to the Steele Dossier. “I go to post again, and it says ‘restricted, you can’t post.’”

Screenshot provided by Garland Nixon captures the post that was unexpectedly flagged and prompted his three-day sentence in Facebook jail.

Nixon noted that Facebook offered absolutely no explanation on why he was given the three-day sentence. “It didn’t give me an opportunity to challenge it, it didn’t have any reasons why – it didn’t have anything,” he stressed.

While Nixon remains uncertain about the whys in the sudden move, he did hint that the White House’s past remarks about how it’s reviewing Facebook posts could have played a role in the matter.

In mid-July, White House Press Secretary Jen Psaki revealed to reporters that the Biden administration was taking on its own initiative to flag misinformation posts about the COVID-19 pandemic and the US’ ongoing vaccination campaign.

That flagging operation effectively “puts a chilling effect on Facebook,” Nixon said of the White House’s flagging effort, “where now Facebook knows the White House is going to be searching at all times … and they’re just preemptively striking anything that the White House wouldn’t want to see.”

As Nixon is left with questions about his stay in Facebook jail, he isn’t alone in raising concerns about the platform’s deliberate censorship.

Mark Dankof, a member of the US National Rifle Association and investigative journalist, told Sputnik that Facebook and Twitter are “engaging in a brand of woke censorship which has turned both into the enemies of the First Amendment and Freedom of Speech for Americans specifically and others generally.”

“The censorship of the New York Post exposé on Hunter Biden and his laptop by Facebook and Twitter during the 2020 American Presidential Campaign, and the present censorship of the new UK Daily Mail article on Hunter Biden’s corruption and recklessness underscore that these social media outlets are under the spell of the Democratic Party establishment, the American Deep State, the Israeli Lobby, and anyone who responsibly questions their official narrative on [Russian President Vladimir] Putin and Russia, Iran, COVID-19 vaccines and masks, Black Lives Matter and LGBTQ, the Second Amendment, American Empire wars, you name it,” he added.

Facebook has yet to respond to Sputnik’s inquiries about its reasoning behind blocking Nixon.