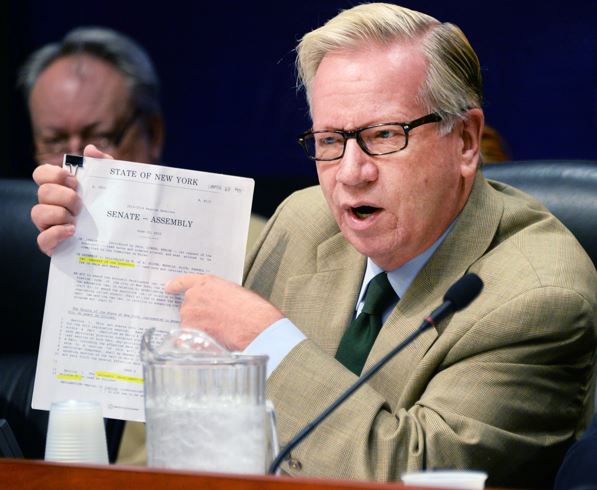 ALBANY – When she was a student at Syracuse University, New York’s next governor, Kathy Hochul, was involved in a student government protest.

This was in the 1970s, a different time to be sure. Rather than climate change or marriage equality, she was demonstrating about something far more prosaic: the price of textbooks at the campus bookstore.

To be fair, climate change, same-sex marriage and other social topics were barely on the horizon in the 1970s. A few years prior to Hochul’s time at SU, students were overwhelmingly preoccupied with the Vietnam War. And Hochul also supported divestment from South Africa’s then-apartheid regime.

But the idea that Hochul cared about textbook prices may provide some assurance on the part of New York’s vast and diverse business community that she’s aware of economic issues and appreciates the importance of simple consumer math when it comes to political decision-making.

Hochul on Aug. 24 will replace outgoing Gov. Andrew Cuomo, who this month announced his resignation in the face of multiple charges that he sexually harassed women on his staff, created a toxic work environment, and mishandled the COVID-19 pandemic response, among other misdeeds.

And while Cuomo had many accomplishments on the economic as well as social fronts, members of New York’s political class have since said Hochul should be a welcome change from Cuomo’s top-down, brutalist style of governing over the past decade.

Businesspeople in the state offered a similar assessment, saying they look forward to working with Hochul, who they hope will listen to their longstanding complaints and concerns about what it’s like to do business in what until now has been Andrew Cuomo’s Empire State.

Beyond that, however, many said they didn’t yet know how Hochul will approach questions of economic development and business sustainability.

The term blank slate, or as former Assemblyman Robin Schimminger put it, “tabula rasa,” came up several times in interviews.

It reflects the reality that Hochul was shut out of Cuomo’s inner circle and was consequently excluded from economic decisions.

She has constantly traveled across the state, attending forum talks, and she’s been to countless ribbon-cuttings as the president of the state’s Regional Economic Development Councils. But that was ceremonial.

There is an upside to that, however. Thanks to that role, Hochul has met and talked with businesspeople across the state. And they liked what they saw.

Blank slate or not, ceremonial or not, many say she’s been a good listener who has acquired an understanding of the economic issues facing New York.

“She knows the economic conditions of the state quite well and she is a very thoughtful listener,” said Heather Briccetti, president and CEO of The Business Council of New York State.

“When I have dealt with her in the past she came across as someone who is sincere and is willing to listen,” agreed Gavin Donohue, president and CEO of the Independent Power Producers of New York, which represent power plant operators and others in the energy field.

Others said they are confident they’ll be able to offer their frank opinions, even if she may not agree.

“I think it’s important that people feel free to say their mind and with Andrew it was impossible,” said Jeff Gural.

Gural is a rarity: a high profile businessman with issues before the state who has been unafraid to criticize Cuomo. He owns the Tioga Downs casino and Vernon Downs harness track/racino, which are state licensed.

He credits Cuomo with doing a lot on the economic front – especially with infrastructure improvements like building the Mario M. Cuomo Bridge and pursuing a LaGuardia Airport overhaul.

But he criticized Cuomo for basically ignoring his and other business leaders’ calls about a range of issues.

This isn’t to say that Hochul won’t bring some economic development and business-oriented ideas of her own.

After serving a term in Congress she worked in government affairs for the Buffalo-based M&T Bank.

And The Business Council’s Bricetti noted that she has been working on ways to improve child care for people as well as develop more workforce training – two topics that are priorities for her group.

The COVID-19 pandemic sent many people home and parents, especially women, continue to deal with newfound child care responsibilities. Figuring out ways to handle that is key for companies that are struggling to get adequate staff.

“We’re having an issue getting people back to work and some of that is child care,” said Briccetti.

As a woman and working mother, Hochul should have an acute understanding of that issue, which could take an added importance once she’s in the governor’s office.

Additionally, her Buffalo roots should make her particularly aware of the continuing challenges facing the upstate economy.

That can’t be underestimated said Gural, who is based in New York City.

“Until the pandemic, New York City was thriving. I used to say to my friends in real estate ‘You have no idea how depressed upstate is,’” said Gural.

She’s also seen the problems that can come with the kind of overarching mega-projects that Cuomo enacted to help the region, Schimminger said.

While in the Assembly, Schimminger, a Democrat, harshly criticized Cuomo’s job creation programs, questioning how much the tax breaks for new businesses and outright grants to giant firms such as Tesla have actually helped. The subsidies for Tesla to build a $750 million solar panel plant in western New York were part of Cuomo’s Buffalo Billion.

Schimminger has documented how these programs have created fewer jobs than initially touted. And the major initiatives have been tarred by the federal bid-rigging case that sent one of Cuomo’s top advisers, Joe Percoco, to federal prison.

“I think it will mean that she won’t go there,” Schimminger said of the kind of large-scale projects that Cuomo was fond of. “She saw the dangers of mega-projects.”

Unknown is whether as governor she will move away from the sweepstakes-style competitions for development grants among regions that Cuomo has favored. Or how she will approach the perennial questions surrounding how many and vast the tax incentives should be for new or existing businesses seeking an edge in comparison to other states. Her office on Friday did not return a message seeking comment.

Her western New York background can also be seen in her earlier reputation as a moderate-to-conservative Democrat.

Peter Warren, research director for the Empire Center fiscal watchdog group notes that when she was in Congress she was among just 25 House Democrats to vote for a federal balanced budget amendment in 2012. Such amendments have long been an elusive Holy Grail for fiscal conservatives on the federal level.

That, along with Hochul’s early opposition to giving driver’s licenses to undocumented immigrants and her early support from the NRA, has been well documented and suggests an earlier conservative streak that’s in contrast to the majority Democrats in the state Legislature these days.

But she has since supported driver’s licenses for undocumented immigrants as well as Cuomo’s tough gun control laws.

That’s not unlike another upstate politician, Democratic U.S. Sen. Kirsten Gillibrand, whose stances on gun control and immigration changed as she moved from the relatively rural conservative 20th House district to representing the entire state in the U.S. Senate.

“Your priorities representing a district change when you represent a statewide office,’ said Bellafiore.