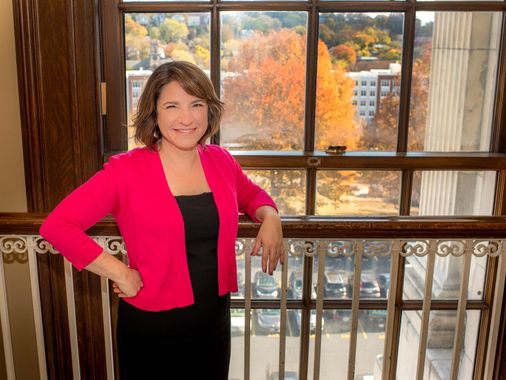 “Millions of women saw their lives completely disrupted by COVID. But even before COVID, inequities in our public policies meant many women struggle to make ends meet,” Goldin said in statement. “Over the course of my political and professional careers, I’ve focused on changing public policies to address inequity. I’m honored to bring that experience to the US Department of Labor during this critical time for our nation.”

Goldin’s departure sets up a scramble to replace her in the Senate District 3, which includes the East Side and Fox Point neighborhoods. A special election will be scheduled within 70 to 90 days.

Within an hour of Goldin’s announcement, Hilary Levey Friedman announced that she is running for the Senate District 3 seat and stepped down as the president of the Rhode Island chapter of the National Organization for Women.

“You just never know what is going to happen in Rhode Island politics,” Levey Friedman told the Globe.

In April, Levey Friedman had said she was exploring a run for either the Senate seat occupied by Goldin or the House seat occupied by Representative Edith H. Ajello, a Providence Democrat. At the time, she make clear that she didn’t want to run against Ajello or Goldin, but she wanted to be ready in case legislative redistricting changes political borders, Goldin sought statewide office, or Ajello retired.

“In the spring, thought I was getting ready for a marathon, not a sprint,” Levey Friedman said. “But now it looks like I’ll be running a sprint.”

Levey Friedman raised about $32,000 during the second quarter of this year and finished the quarter with $26,822 in campaign cash, according to reports filed with the state Board of Elections.

In announcing her candidacy, Levey Friedman praised Goldin, saying, “She has been a leading voice in the movement for social justice, women’s issues, and working families. I admire what she has accomplished and congratulate her as she leaves to make her mark nationally. I am committed to continuing to work on the issues she has championed.”

Levey Friedman, 40, is a sociologist and expert on beauty pageants, childhood and parenting, competitive after-school activities, and popular culture who teaches in Brown’s Department of Education, where she is a visiting assistant professor. She has written two books, including “Here She Is: The Complicated Reign of the Beauty Pageant in America.” She has degrees from Harvard University, Princeton University, and the University of Cambridge.

On Tuesday afternoon, Geena Pham declared her candidacy for the Senate District 3 seat, saying she is a public school teacher in Massachusetts who, her campaign believes, would be the first Asian-American in the General Assembly.

The number of Rhode Islanders identifying as Asian grew by nearly 28 percent over the past decade, new census data show. But former Cranston Mayor Allan W. Fung has noted that he has been one of only a handful of Asian-American elected officials in Rhode Island in recent years.

“At the start of each day, I say the pledge of allegiance with my students. We promise them ‘liberty and justice for all,’ but we fail to deliver,” Pham said. “I am running because I see my students graduating into a world where everyday people struggle to afford housing, breathe clean air, drink clean water, and find their children quality education. I also see my Black and brown students disproportionately face these challenges. We must build a state where ‘liberty and justice’ extends to all Rhode Islanders.”

She plans to run as a member of the Rhode Island Political Cooperative and advocate for a Green New Deal and universal health care, among other priorities.

Pham, 27, was born to a single mother who immigrated from Vietnam. After growing up in public housing, she became the first in her family to attend college and earned a degree in education at the University of Massachusetts Boston. She teaches English at Dartmouth High School.

Pham also praised Goldin, saying, ”Senator Goldin courageously challenged the corrupt leadership of our state Senate to fight for the people of Rhode Island. Her years of advocacy for paid family leave, reproductive rights, and better wages have made an everlasting impact on our state.”

Goldin, first elected to the Senate in 2012, had been considered a potential candidate for secretary of state in 2022, so her announcement helps Representative Gregg Amore, an East Providence Democrat, who is expected to run for the seat that term-limited Nellie M. Gorbea is vacating.

Goldin was a champion for the Reproductive Privacy Act that the General Assembly passed in 2019 aiming to protect abortion rights in Rhode Island in case the US Supreme Court overturns Roe v. Wade.

She introduced the pay equity bill that Governor Daniel J. McKee signed into law earlier this month. And she pushed for passage of Temporary Caregiver Insurance, making Rhode Island the third state to have paid family leave and the first to do so with job protection.

Goldin, who has two adopted children, pushed to allow adult adopted children to get their original birth certificates at age 18 instead of 25 and a bill of rights for children in foster care. She also introduced the “Student Journalists’ Freedom of Expression Act.”

In November, she challenged Senate President Dominick J. Ruggerio, a North Providence Democrat, for the leadership post during a Democratic caucus. She had challenged Ruggerio’s leadership, arguing that his opposition to abortion rights legislation and his “A” rating from the National Rifle Association put him at odds with the national Democratic Party platform.

But during the caucus, both Ruggerio and Senator Majority Leader Michael J. McCaffrey, a Warwick Democrat, held onto their positions by votes of 24 to 7, with two abstentions. Although she lost her bid to become Senate president, Goldin at the time called it “a huge victory” because the Senate set out such a progressive agenda.

On Tuesday, Ruggerio issued a statement, saying, “Senator Gayle Goldin leaves an indelible mark on our state, and I thank her for her service.” He said Goldin made Rhode Island a national leader on paid family leave, championed a strong pay equity law, and “fought tirelessly” on adoption issues.

“The Biden administration is gaining a dedicated and passionate public servant,” Ruggerio said. “I wish her and her family the very best.”

Goldin graduated from McGill University and earned a master’s degree in public policy from Tufts University. She has worked as a campaign adviser to Family Values @ Work. Previously, she served as the strategic initiatives officer at the Women’s Fund of Rhode Island. She began her career in Rhode Island working at a national organization focused on increasing access to health care for the uninsured.

“Only 59 women have served in the Rhode Island Senate in our state’s history,” Goldin wrote in her resignation letter. “It has been the honor of lifetime to be one of them.”