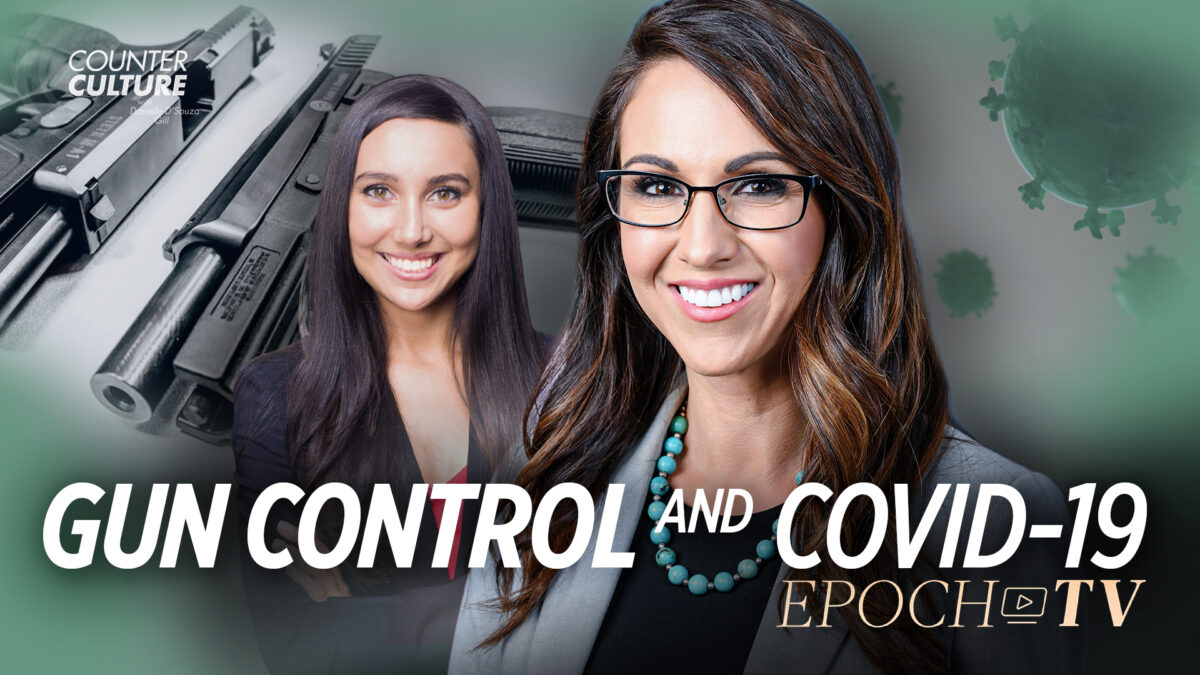 In this episode of Counterculture, “Gun Control and COVID-19,” host Danielle D’Souza Gill explores American freedoms that are being taken away by our government little by little. She also delves into how COVID-19 and gun control are linked together. This video gives us vital information about how the government and Democrats in particular want to take our freedoms and how we can preserve them.

In a fable about a frog that is put into a pot of hot water, once the frog hits the hot water, it immediately jumps out. However, if the water is lukewarm and slowly heated to boiling, the frog will stay in the water, not realizing what is happening until it is too late. A similar situation is happening in our country, with one thing after another being taken away or restricted.

As COVID-19 has swept through our country, it has been used as a reason to impose more and more restrictions on citizens and businesses—all done under the guise of “public safety.”

Just because citizens are forced to live under these restrictions doesn’t mean that members of the government lead by example. The host gives a good example of this. Former President Barack Obama had a big birthday bash in Martha’s Vineyard and did not follow social distancing protocols or masks. Several celebrities were in attendance and two who posted pictures with Obama, who was not wearing a facemask, were asked to take down their posts after he came under criticism. Definitely a “do as I say, not as I do” situation. Another example is when salons were shut down in the state of California, Nancy Pelosi was able to find a salon to get her hair done.

So, one might ask what does the Second Amendment have to do with COVID-19? Gill explains that as the government takes away more and more freedoms, there is no way to tell when it will stop, and Democrats have had the 2nd Amendment in their sights for quite some time. Every time rights are taken away “for our own good,” it always ends up giving the government more power.

History of the Second Amendment

The Second Amendment to the U.S. Constitution was passed in 1789 by Congress and ratified in 1791. It states that “a well-regulated militia being necessary to the security of a free state, the right of the people to keep and bear arms shall not be infringed.”

When the United States was founded, there was not a standing army. Instead, groups of men formed militia groups with their own weapons. While this amendment was used to keep guns from being regulated by the federal government, states were able to regulate guns as they saw fit.

The host goes on to explain that Biden signed an executive order prohibiting the sale of guns that did not have serial numbers. He wants to be able to track our weapons and make it where each part is stamped with a serial number. The host states, “The left even describes a massively popular organization like the NRA as being extremists.” She points out that the Second Amendment was not added to the Constitution for hunting or sport but to protect us, especially from a tyrannical government. Guns help us protect ourselves and our property.

Leftists have also been calling guns “racist.” A professor at Emory University claimed that the Second Amendment was created to keep African Americans powerless. Leftists state that the only reason guns would be needed was to control slaves. They ignore the fact that the northern states did not have slaves so that would not have been a reason for them to own guns. They saw the need for a nation to be armed to defend themselves against tyranny, which their dealings with the British had taught them. Federalist James Madison said that owning guns is part of what makes America great and gives Americans an advantage that people from other nations do not have.

The next portion of the video features an interview with Rep. Lauren Boebert (R-Colo.). She is known for being an outspoken supporter of the Second Amendment and has been seen carrying a Glock on her hip. Boebert was born in Florida but grew up in a rough part of Denver, Colorado. Her mother was primarily a Democrat and believed the lie that she could not survive on her own without government assistance. This trapped her and the family in poverty, relying on government housing and food. Then, they moved to a better area in Colorado and became part of a real community where people helped each other find ways out of poverty instead of just giving handouts. Boebert says, “Politicians don’t want you to look to your neighbor to see how to better yourself. They just want to maintain control and they want to be your provider.” Once this happens, people feel obligated to give them their votes and support.

During the COVID-19 pandemic, the government has told us that we need to stay separated from each other, even from family. However, once again they do not practice what they preach. People have waited for politicians to give them advice on what to do next, while politicians have promoted fear and isolation. When she was growing up, Boebert got her first job at McDonald’s and said she remembered how empowered she felt bringing home her first paycheck and being able to help her mother. She stated, “I learned at a very young age that I could do a better job of taking care of myself than the government ever did.”

Boebert started a restaurant called Shooter’s Grill in Rifle, Colorado, where workers are encouraged to open carry. After an altercation at the restaurant where a man lost his life, she started carrying her gun, and soon thereafter, her workers followed suit. She takes firearm safety very seriously, and she and her workers have taken firearms training. She became an advocate for the Second Amendment.

As Gill and Boebert point out, talking about these issues is not enough. We need people to speak out against government control. She assures us that one person can make a difference, which is something she has learned by working for the people of Colorado in Congress. She says that when she gets an idea that she knows she cannot accomplish on her own, she gets excited because she knows God will put people in her path to help her and good things will come of it. She urges us to do the same. Go back to relying on each other for help and support and take back control of our rights and our country.

Views expressed in this article are the opinions of the author and do not necessarily reflect the views of The Epoch Times.

Lacy Hall is a native born Texan and lives in South Texas. She earned a bachelor of science degree in English/Education from Howard Payne University. She enjoys research and has a passion for writing entertaining, informative, and relevant content for her readers.