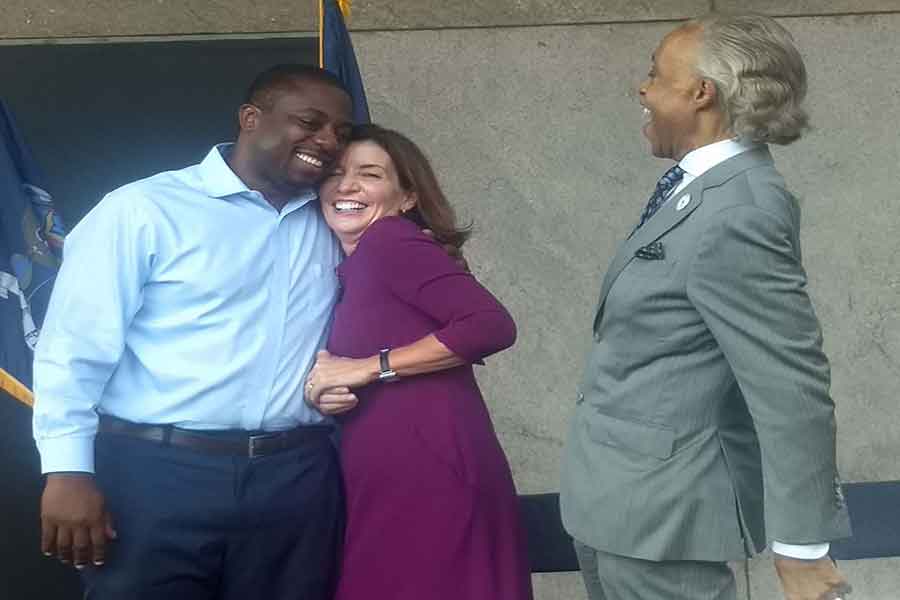 Since taking the reins of power on Tuesday, August 24, Governor Kathy Hochul has been from Manhattan to Syracuse with little time spent in Albany. She has had a full plate of agenda items to contend with, including an eviction moratorium that expired on September 1.

Hochul is deciding about calling back the state legislature to pass an extension to the eviction moratorium. For now, she has little recourse to help renters and landlords.

“What we have in the state of New York is a situation where anyone who has applied and qualified for the rental assistance should have no fear of being removed from their home for a solid year,” Hochul told a group of reporters outside the Harlem State Office Building after announcing her choice to succeed her as lieutenant governor.

“The eviction moratorium that’s expiring shortly will have no bearing on these individuals. We’re talking about literally sending people to their doors. People who have been working on the Census know where to find people, and I’ve employed a number of entities involved in this including the Office of Court Administration. When a landlord files an eviction notice somebody in that office knows it. I want the person being evicted to be notified immediately [in order] to apply for this fund.”

Hochul has also set a 45-day transition period so she can sort through the government morass left over from her predecessor, Andrew Cuomo.

“I’ll be naming a full slate of new people for the vacant positions from people who were named in the AGs (Attorney General’s) report,” Hochul said. “Ethics will be a hallmark of my administration.”

Hochul named 44-year-old state Senator Brian Benjamin to be “my partner, my running mate.” She said he “has done an extraordinary job representing not just Harlem but the entire City of New York with heart and conviction. We have spent many hours together. He’s a highly educated, disciplined, passionate individual; someone who I consider a friend. I want a partner in government to be at my side to make the tough decisions, to be in the room, when he’s not out there greeting people all over the state of New York. I am delighted that he said yes to my request that he be my lieutenant governor.

“This individual is someone who’s been through the trenches, starting locally where he was on his community board, where he worked his way up to elective office and someone I’ve become a dear friend of in the Senate,” Hochul said. “He has been a champion of criminal justice reform, affordable housing and tenant protection – three huge priorities of mine as well. And he’s built a track record of great accomplishments already.”

Hochul said she will task Benjamin to deal with the eviction moratorium together with her.

“I want him to be with me to tell these tenants, these residents to have hope,” Hochul said. “We’ve heard them. You’re not lost. We’ve seen their faces. We’ve walked their halls. We’re going to do something about it. I’m going to be deploying a SWAT team to get that rental relief out and get it out now, so you can count on that. We’re going to protect you for a year, but you have to come in the door and apply for that.”

Benjamin could be officially sworn in and sign the all-important oath of office as early as September 2, 60 days prior to Election Day. Once Benjamin takes the oath of office the 60-day clock begins to tick for his successor to be chosen for the state Senate seat covering central Harlem, the 30th Senatorial District.

Hochul said there would be a swearing-in right after Labor Day.

The praise was offered right back at her from Benjamin.

“I knew the kind of person she was before she had power,” Benjamin said. “You could tell a lot about someone before they have that ultimate power. This is a woman who cares about the entire state, and that is the kind of governor we can be proud of and we can work with, to make sure that we get through this pandemic, we can get to a great recovery. We will do that under the leadership of my friend, my sister, my governor, Kathy Hochul.”

On the issues, Hochul and Benjamin diverge on a few policy matters.

“We have so many fights that we have to wage, [like] gun violence in our community. We’ve got to make sure that we keep our kids safe,” Benjamin said. “The homeless problem…. Affordable housing, a huge problem. The Delta variant, Covid. We just thought we were getting out of Covid and here we are. We got to put the mask back on but you know what? We owe it to each other to keep each other safe. We got to make sure that our renters and landlords and workers who have been hurting because of Covid get the relief that’s already here for them to receive. New York State government has to work and Governor Kathy Hochul and I will do everything I can to help you and make sure that we deliver for the State of New York.”

Benjamin was born in Harlem Hospital, the son of Caribbean immigrants. He grew up in Brooklyn, and earned a Bachelor of Arts degree in public policy from Brown University and a Master’s of Business Administration from Harvard Business School. He is married and has one child and another one on the way.

One person who wasted no time throwing his hat into the ring for Benjamin’s seat is Assemblyman Al Taylor, a pastor at the Infinity Mennonite Church of Harlem.

“I will be entering my name into the race for the 30th Senatorial District,” Taylor exclusively told The Jewish Press. “It’s a county committee election and yes, I am there. There are a whole lot of other qualified people, I’m sure, that have a desire [to jump into the race]. What makes democracy so great is they will have the opportunity to put their name through the New York County Democratic Committee to say, ‘I want to be a candidate.’ ”

Taylor, 64, was chief of staff to Assemblyman Herman “Denny” Farrell, who died of heart failure one year after retiring in 2017 at age 85. Taylor, who was the district leader for Farrell’s 71st Assembly district, was unopposed for the position. The same situation exists now for the Senate seat, with the difference that the Senate district encompasses more than one Assembly district, so Taylor is not a shoe-in but he appears to be the odds-on favorite.

A lifelong resident of Harlem, Taylor had a troubled youth and was able to turn to then-Assemblymember Bruce Wright, who mentored him and gave him an interest in community service. Taylor then served in the Military Police Corps while earning his GED, then graduated from Lehman College. He later earned a Master of Divinity, with a concentration in church development, from Nyack College Alliance Theological Seminary. Taylor is married with five children.

Taylor opposed Benjamin for the Senate seat when it was vacated in 2017 by incumbent Senator Bill Perkins. Now, with Taylor in the Assembly, the two have achieved a harmonious working relationship.

“The state is going to have a great friend in the lieutenant governor’s office if they care about education, care about community, transforming the negative to the positive, you’re going to find that in this guy,” Taylor said.

Also in attendance at the announcement was the Reverend Al Sharpton. To fend off media criticism as to why he’d be there, Sharpton said from the podium, “We’ve been with Brian from day one, so don’t blame the governor. Blame Brian’s background.”

NAACP New York State Conference President Hazel Dukes spoke about Benjamin being a friend you can count on.

“I tell you, New York State, that he is loyal. Governor, he’ll be loyal. You don’t have to look over your shoulder,” Dukes told a cheering crowd. “When you and Brian sit down and make out your plan, he will carry out the plan…. You’re going to have a man of integrity, a man of compassion, a man of love to work with this governor.”

Meanwhile, a Republican rally was held a couple of hundred miles away in the backyard of a gun store in the town of Colonie, Albany County. During next year’s campaign season, Republicans plan to tie Hochul to Cuomo’s policy coattails even though she maintains she was never close with the ousted chief executive.

“I admire Kathy Hochul’s tenacity as an elected official and she has a tireless work ethic. I will give her that today,” said New York State Republican Party Chairman Nick Langworthy, a fellow resident of Buffalo. “It’s certainly nice to see someone from the western end of the state become the governor.

“We’re going to absolutely hold her accountable just like we did Andrew Cuomo. She has embraced the policies of his administration for the last eight years. She cheerleaded him. She’s been a mascot for those policies. That’s her record just as much as it’s Andrew Cuomo’s record. I wish her well. If she succeeds, the state will succeed. I don’t have the best feelings for the policies that are on the table right now,” he said.

Langworthy also ripped into Hochul for not taking a policy stand and sticking with it.

“She’s someone who doesn’t necessarily have a political nucleus of core or set of values,” Langworthy told The Jewish Press exclusively. “She’ll be a shape-shifter and flip-flop on core issues, like being an NRA-endorsed congresswoman that now embraces the SAFE Act and gun confiscation policies that are our core threat to our Second Amendment in this country. When she needed the votes of populist-leading Erie County to be clerk, she was against drivers’ licenses for illegal immigrants. Now she’s a full-throated proponent of that policy. Those are great examples of how she has flip-flopped over the years. I think Kathy has shown a disposition to be a flip-flopper on virtually everything.”

Langworthy predicts that like Eliot Spitzer and Andrew Cuomo, two former attorneys general who both resigned from office, Attorney General Tish James will throw her hat in the gubernatorial ring next year to primary Hochul.