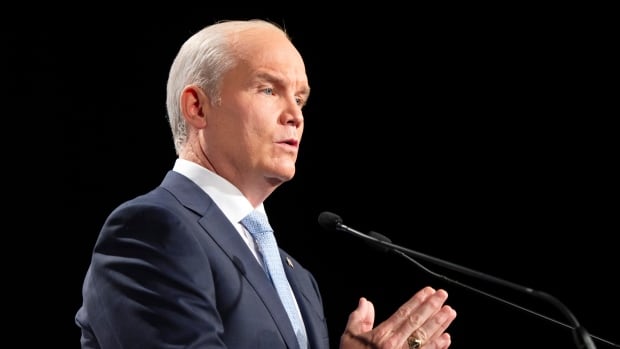 But he also doubled down on a promise he made last night in the first French-language leaders’ debate, when he vowed that a government led by him would “maintain the ban on assault weapons.” The Liberal government implemented a ban on “assault-style” firearms last year.

“We will maintain the ban on assault weapons and we will develop a transparent process when it comes to training and licensing for guns, because we need to target street guns and smuggling. We’ve seen an increase in violent crimes because of that,” O’Toole told reporters at a campaign stop in Montreal.

O’Toole’s commitment to maintain the ban on “assault weapons” refers to a 1977 legislative change that classified fully automatic weapons as “prohibited” firearms — but he would still do away with the Liberal prohibition on “assault-style” firearms like the AR-15 and the Ruger Mini-14 rifle, among other models blacklisted last year.

The term “assault-style” has no legal definition in Canada. Generally speaking, an assault-style weapon is a semi-automatic firearm (the trigger must be pulled to fire a round) with an ammunition magazine. An assault weapon can fire fully automatically, which means it continues to shoot as long as the trigger is held down.

Canadian Doctors for Protection from Guns (CDPG), a gun control advocacy group, said today O’Toole’s plan to reverse the Liberal ban on firearms used in mass shootings would result in “tragic consequences.” Such weapons “have the capacity to injure and kill many people in a very short period of time,” said Dr. Najma Ahmed, a co-founder of the group.

“Ensuring these guns are permanently out of our communities or rendered inoperable is an important, evidence-based measure to protect public health and safety,” she said.

O’Toole said Liberal Leader Justin Trudeau has the wrong prescription for gun-related crime and accused the Liberal leader of targeting “farmers, hunters and law-abiding firearms owners” through regulatory changes rather than gang members with handguns.

“We’re going to go after the real risk here — criminal gangs and the illegal smuggling of firearms, something that’s gotten worse under Mr. Trudeau. I will focus resources on what keeps communities safe and stop this process of dividing Canadians,” O’Toole said.

Erin O’Toole says his party promises to maintain the ban on ‘assault weapons’ and target the illegal smuggling of firearms. 0:30

During its past six years in government, the Liberal Party has shifted from a previous strategy of policing long guns to banning “assault-style” weapons. A May 2020 cabinet order reclassified more than 100,000 firearms as “prohibited,” forcing owners to give them up or face criminal sanctions.

The Conservative platform says a government led by O’Toole would “start by repealing C-71” and “the May 2020 Order in Council” and would conduct “a review of the Firearms Act with participation by law enforcement, firearms owners, manufacturers and members of the public.”

That May 2020 order is the “assault-style” firearms ban that outlawed some 1,500 makes and models of what the government describes as “military-grade weapons.”

“Our focus will be on keeping firearms out of the hands of criminals. This contrasts with the Liberals, who have refused to take action against gangs while harassing hunters and sport shooters,” the Conservative platform reads.

“Canada’s Conservatives will improve the regulation of legal firearms to ensure that it is evidence-based and focuses on protecting public safety.”

Trudeau said O’Toole is trying to confuse Canadians with semantics by answering questions about an “assault-style” firearms ban by speaking about “assault” weapons — which have been prohibited for more than 40 years.

“I think what we have here is a really concrete example of something we have seen consistently from Erin O’Toole. He says one thing to special interests groups — anti-choice groups or anti-vaxxers or climate deniers or the gun lobby — and he tries to tell Canadians the exact opposite,” Trudeau said.

“He says very clearly on page 90 of his platform that he will reverse the May 2020 order in council by this government — the one that bans military-style assault weapons in this country. He will reverse our move to make it illegal to buy, sell or use assault weapons in this country and he got caught saying one thing to his friends in the gun lobby and the opposite to Canadians.”

Heidi Rathjen, a survivor of the Polytechnique massacre, and a co-ordinator with the gun control group PolySeSouvient, accused O’Toole of “lying” to voters when he said in Thursday’s debate that he would uphold a ban on assault weapons when he’s really on side with dismantling a prohibition on weapons used in mass shootings such as the Quebec City mosque massacre and the Moncton shooting.

“What he is doing is mirroring the gun lobby’s tactic of playing with semantics in order to avoid defending the indefensible — making semi-automatic military-type weapons legal again against the will of 80 per cent of Canadians,” she said, referring to recent polls on the subject.

“O’Toole will not come clean about his position on assault weapons because he knows that most Canadians would be appalled by his true intentions. Instead, he evades, distorts and deceives.”

Conservative opposition to the Liberal weapons ban has solidified support among firearms rights activists who claim these measures are nothing more than a symbolic sop for gun control advocates that will penalize lawful gun owners.

“As a CAF veteran, Erin O’Toole knows that no military in the world would send their troops into combat with a semi-auto, 5-round plinker, which is what Trudeau banned,” said Tracey Wilson, a spokesperson for the Canadian Coalition for Firearm Rights.

“Actual military assault rifles have been banned since 1977 and O’Toole has no intention of overturning that. The May 1 order in council is NOT an ‘assault weapon’ ban. Trudeau misled Canadians with scary terminology and O’Toole capitalized on that. Words matter, especially in elections.”

Speaking later Friday at a press conference, Liberal candidate Bill Blair — the former Toronto police chief who serves as the federal public safety minister — said O’Toole “owes his loyalty and allegiances to the gun lobby” and would repeal Liberal rules designed to keep weapons of war off of Canada’s streets.

“Mr. O’Toole has made a very difficult alliance with them — they are proxies for the NRA in the U.S.,” Blair said. “He relied on the gun lobby’s support and their money in order to win the Conservative leadership and he has made very significant promises to them.

“He needs to be clear and he needs to be honest and clarify what he actually intends to do. He’s attempted to deceive Canadians using weasel words. When Mr. O’Toole talks about an assault rifle ban, he’s not talking about the 1,500 weapons that were designed to be efficient in the killing of people that we banned in May of 2020.”

Beyond the assault-style firearms ban, the Liberal Party has promised even stricter measures during this campaign for the firearms that were declared prohibited by the May 2020 order-in-council.

“There’s no place for these weapons. They’re the choice of people who engage in mass murder,” Blair said.

Citing some recent homicides at his announcement today, O’Toole said that “senseless violence” has become “too commonplace in a country as free and safe as ours.”

O’Toole said that on Trudeau’s watch, there has been an unacceptable 20 per cent spike in homicides. According to Statistics Canada data, the number of homicides increased from 606 in 2015 — the year the current Liberal government took office — to 743 in 2020.

To address this, O’Toole said a government led by him would amend the Criminal Code to make it easier for police and prosecutors to “go after gang networks and prevent the import of illegal guns.” He is proposing a mandatory minimum sentence of two years for the unauthorized possession of a firearm if the person was subject to a prohibition order or was previously convicted of a firearms-related offence.

Like past Conservative leaders, O’Toole is also promising to boost resources for the Canadian Border Services Agency and the RCMP so they can “work closely with American authorities to target smuggling operations before illegal guns reach the border.” He also said he wants to establish a “gang exit strategy,” to give young gang recruits “a way out and a chance at a fresh start.”

The image below shows some of the firearms banned by the Liberal government in its May 2020 order in council. O’Toole has promised to repeal the ban on these “assault-style” firearms, if elected.