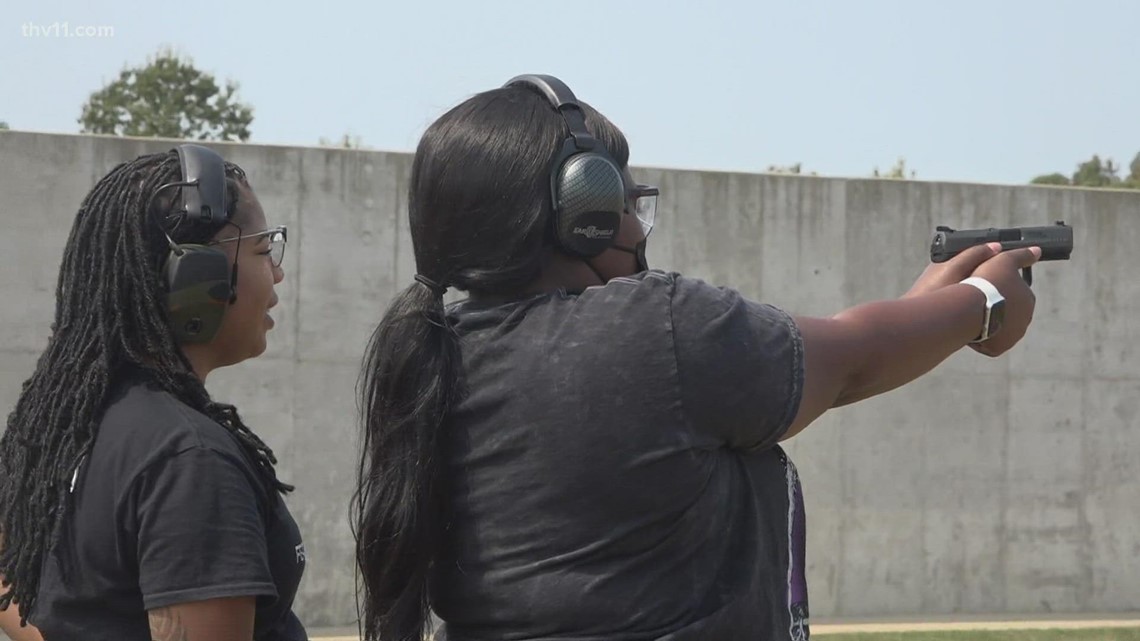 Desstoni Johnson is the founder of Fearless Firearm Instruction LLC: a firearms academy in central Arkansas created with women in mind.

LITTLE ROCK, Ark — After her husband bought seats to a concealed carry class as a gift for her 21st birthday, Desstoni Johnson left the class feeling like she didn’t learn a thing.

Many times during class, she felt the male instructor was speaking to everyone except her and the only other woman in the class. Johnson and her classmate would constantly glance at one another wondering if they were the only ones confused and feeling left out.

Instead of becoming discouraged about it, Johnson became motivated to continue practicing and learning as much as she could on her own. It inspired her to want to help others.

“From then on, I couldn’t put guns down. When carrying, I feel I am in control of my own safety and when teaching, I feel empowered knowing I am gifting that same sense of security to other men and women,” said Johnson.

She saw a need for more inclusive, unbiased, and relatable firearms training for women. As a woman, she knew first-hand how off-putting the gun industry can be and wanted to create a safe space for ladies to learn, practice, and gain knowledge.

“Most of the women who came to train here, they have the same thing in common: ‘I was always scared to touch guns and the only reason I came here was because you’re a woman and I felt more comfortable learning from you,'” said Johnson.

Reietta Smith was a part of Johnson’s class and said she is appreciative of having a woman instructor.

“We’re always demonstrated as the weak. Like we can’t protect ourselves. We always have to call the police or call brother, uncle and I feel like this just proves that we can do whatever a man does,” said Smith.

It’s also important for Johnson to teach minority groups in proper gun protocols to ensure that they have a safe space as well. Darryl Thomas was one of Johnson’s first students and now assists her at the range.

“It’s about just knowing how to basically protect our families. You know, that’s the biggest thing. Legally and safely,” said Thomas.

Johnson said he feels previous gun laws have made it difficult for certain demographics to obtain guns in an attempt to defend themselves and the people around them.

“The gun industry or just gun culture in general has just never been particularly open to, I don’t want to say minorities, but to women,” said Johnson.

She said even as an instructor, she still faces discrimination from predominately men who assume she’s too young to teach or feel that she isn’t knowledgeable enough to lead a course.

Her qualifications have given her the opportunity to offer basic and enhanced concealed carry licensing classes, marksmanship lessons, private firearms training, and more.

“I’m an NRA certified pistol instructor,” said Johnson. “I’m an NRA basic range safety officer: stop the bleed certification. We’re on the range and we’re handling guns and holes happen on the range, you know, with my students I want to be able to help until an emergency medical personnel comes.”

The goal is to introduce more women and other underrepresented groups to responsible and legal gun ownership, safe usage, and skilled marksmanship.

“They feel more comfortable learning from someone that looks like them,” said Johnson.