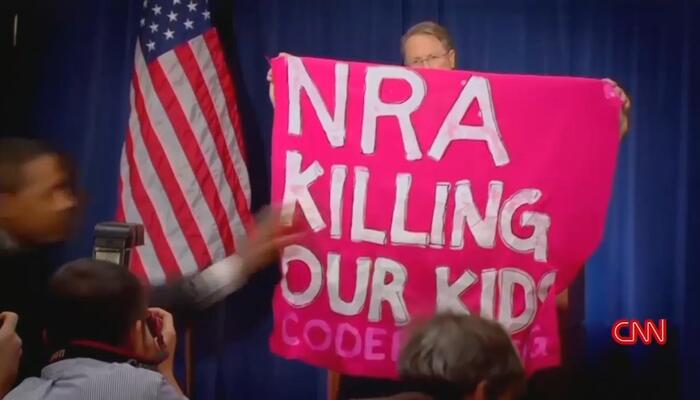 On Sunday night, CNN put on a special from its CNN Films unit titled The Price of Freedom, which was a nasty dig at the National Rifle Association. The liberal news network gave the kind of slanted presentation one would expect, with the addition of swelling, dramatic music. Most of the soundbites were harsh critics of the NRA who were given a forum to complain that the pro-gun group has been too successful in pushing its agenda.

There were no advertisers in this two-hour special….just one long anti-NRA ad. The film closed with former Congresswoman Gabrielle Giffords pushing for people to vote against the NRA. After the 90-minute film concluded, CNN’s Chris Cuomo — after noting that the NRA declined to participate — spoke with three gun control advocates in a pre-recorded segment.

In the opening tease, a clip of Democratic Congresswoman Lucy McBath set the tone as she declared: “You’re 25 times more likely to die by gun violence in the United States of America than any other developed nation in the world. What does this say about us as Americans? We’re just willing to let people die because we’re afraid of the NRA?”

Investigative journalist Frank Smyth added: “There’s no other single-issue lobby in the United States that has had as much success advancing its agenda against the wishes of the majority of the country. … The NRA has managed to convince millions of Americans that when people get killed in gun violence, that is the price of freedom.“

The soundbites of CNN’s interview with former NRA president David Keene, along with stock footage of executive vice president Wayne LaPierre and former president Harlon Carter, were not nearly enough to counter misinformation pushed in the film as more than a dozen different critics of the pro-gun group were featured in soundbites throughout the film.

About half an hour into the presentation, Yohuru Williams of the University of St. Thomas and Caroline Light of Harvard University lamented the passage of Stand Your Ground laws that make it more difficult to convict people when they defend themselves from criminals, leading to Congresswoman McBath recalling the killing of her son, Jordan Davis, in 2012 by a man who confronted him at a gas station about playing loud music.

Even though the perpetrator, Michael Dunn, was convicted of murder and given a life prison sentence, the clips of McBath misleadingly made it sound like he was able to use the Stand Your Ground law to avoid prosecution.

Additionally, it was not mentioned that Davis was murdered in Florida where, as of 2019, the state had seen a substantial drop in the rates of most types of violent crime since the law was passed in 2005.

Later on, the documentary also repeated the recurring misinformation that an overwhelming majority of Americans support requiring background checks on all gun purchases even though this figure has repeatedly been demonstrated to be greatly exaggerated.

CNN also recalled that, in the 1960s, the NRA (under different leadership) supported efforts to disarm the Black Panthers in California, but did not mention that, in recent decades, the conservative group has aided African Americans living in places like Chicago and D.C. trying to defend their gun rights.

Average African Americans like Josephine Byrd, Otis McDonald, Mary Shepard, and Shaneen Allen have been assisted by the NRA. It has also been argued that gun control disproportionately hurts African Americans for a variety of reasons.

By contrast to its menacing music for the NRA, the music turned light to promote the leftist student activists who emerged (with aggressive CNN promotion) to fight the NRA after the Parkland school shooting. CNN glossed over the nasty things these students actually said on a CNN town hall, with no pushback, including that Sen. Marco Rubio looked like the Parkland shooter.

CNN’s The Price of Freedom

CONGRESSWOMAN LUCY MCBATH (D-GA): You’re 25 times more likely to die by gun violence in the United States of America than any other developed nation in the world. What does this say about us as Americans? We’re just willing to let people die because we’re afraid of the NRA?

FRANK SMYTH, INVESTIGATIVE JOURNALIST: There’s no other single-issue lobby in the United States that has had as much success advancing its agenda against the wishes of the majority of the country.

GREGORY JACKSON JR., COMMUNITY JUSTICE ACTION FUND: Gun violence is taking lives at a historic rate. It’s only getting worse and worse, and yet we’re focused on the right to bear arms and not the right to live.

SMYTH: The NRA has managed to convince millions of Americans that when people get killed in gun violence, that is the price of freedom. Why has that happened? We have to start unpacking their myths.

YOHURU WILLIAMS, UNIVERSITY OF ST. THOMAS: The NRA then begins pushing for legislation that would encourage people not only to be able to carry but to be able to use guns to defend their lives without fear of being prosecuted.

JACKSON JR.: In all states where Stand Your Ground laws have been passed, we’ve seen gun related deaths and homicides increase. This violence continues to rage forward, and we’re watching individuals in our community being slain.

CONGRESSWOMAN MCBATH: Jordan was very compassionate and very, very sensitive. He had a lot of wisdom and a great deal of understanding and trying to figure out the world around him. The man who murdered my son was claiming that he feared for his life, that my son had a gun or stick, and he needed to defend himself, and the Stand Your Ground law gave him the ability to be able to do that.

AUDIO OF MALE REPORTER: Jordan Davis was shot and killed here at St. Meadows in Southside during an argument over loud music.

AUDIO OF FEMALE REPORTER: Dunn admitted to firing his weapon but said he did it in self-defense after he says he was threatened by the teens.

AUDIO OF MALE REPORTER: No gun was found in the teen’s SUV.

MCBATH: That man was using his implicit bias and his racism as a means to act out his violent tendencies towards my son and his friends because you can shoot to kill and ask questions later based a perception of threat under stand your ground.

WES SILER, GUN OWNER: The NRA just does not represent gun owners anymore. My passion is hunting. And half of all NRA members are hunters. Why is the organization that claims to represent gun owners working against any effective safety measure capable to keep American children safe? We all want to see kids not get killed in schools — we all want to see crime be lower. We all want to live in a better, more perfect union. By making guns so partisan and saying politicians are trying to steal our guns, the NRA is preventing a larger conversation from happening.

LIGHT: More than 80 percent of U.S. adults support requiring background checks for all gun sales. And there’s no difference between gun owners and non-gun owners or by political affiliation.