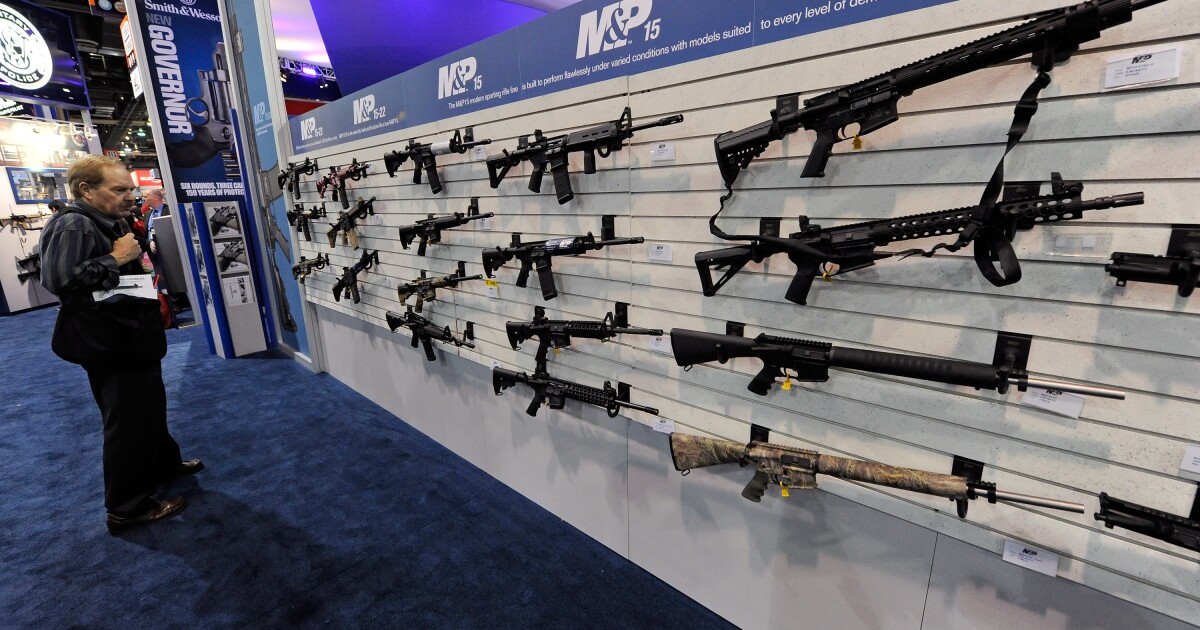 Like the many gun safety bills that have come before it, the one just signed by Gov. Gavin Newsom is borne from tragedy.

In 2019, John T. Earnest, a then-19-year-old Rancho Peñasquitos college student, opened fire on a Poway synagogue using a rifle he bought at a Grantville gun shop.

He did so under a narrow provision that allows 18- to 20-year-olds to buy guns as long as they have a hunting license.

Earnest had one — the license just wasn’t valid yet.

A measure signed into law Thursday night tightens that loophole.

The legislation is the latest reminder that even in a state with some of the nation’s strictest gun laws, ambiguities — and ways to exploit them — remain.

New laws are a common ripple effect of modern-day mass shootings and other random gun violence that making national headlines. Often, they are narrowly tailored to address a specific, and perhaps previously overlooked, gap in existing law.

In response to the 2015 San Bernardino mass shooting, California banned “bullet buttons” — or a button on a rifle that enables the shooter, with the use of a small tool, to release a magazine and attach a new one. The feature was designed as a way to get around another law, California’s ban on assault rifles, including those with detachable magazines.

After the 2017 Las Vegas music festival massacre, the Trump administration prohibited “bump stocks” — a device that increases the rate of fire on a semi-automatic weapon, mimicking automatic fire. Bump stocks were already illegal in California, but the federal ban was a rare national response to gun violence.

The latest law, SB 715, authored by Democratic state Sen. Anthony Portantino of La Cañada Flintridge, requires the California Department of Justice to verify the validity of a hunting license for anyone under the age of 21 trying to buy a gun, as part of the already mandatory 10-day background check. The law goes into effect July 1, 2025. It also requires gun sellers to visually verify the validity of a hunting license and to document it.

“This situation was a tragedy that uncovered a flaw in the gun purchase system,” Portantino said in a recent interview. “This is a loophole that needs to be closed.”

Portantino’s bill pertains to a much smaller population than some previous gun laws. Roughly 12,000 individuals 18 to 20 years old bought annual hunting licenses in California last year, according to Fish and Wildlife.

Earnest bought the Smith & Wesson M&P15, an AR-15-style rifle, on April 13, 2019 from San Diego Guns on Mission Gorge Road for $963.41, according to court records. He presented a certificate showing he completed a hunting education course — a necessary step in acquiring a hunting license.

It is still not clear if he presented a hunting license during his purchase. Fish and Wildlife have confirmed that a license had been issued to Earnest but it wasn’t set to go into effect until the official start of the season on July 1, 2019.

Nearly two weeks later, on April 26, he picked up the gun. He stormed Chabad of Poway the following day. Outfitted in tactical gear, with multiple loaded magazines, Earnest opened fire in the lobby. Lori Gilbert-Kaye, 60, was killed. Three others — founding Rabbi Yisroel Goldstein, 8-year-old Noya Dahan, and her uncle, Almog Peretz, 34 — were injured.

Earnest struggled with a second magazine and took fire from another congregant, an off-duty Border Patrol agent. Earnest sped off in his car, called 911 to report what he’d done and waited for police to arrest him.

Earnest has pleaded guilty to multiple charges in both state and federal court related to the shooting and is expected to spend the rest of his life in prison.

The shooting has led some victims to sue the gun shop over the sale to Earnest. The expansive litigation, which includes several other defendants, is in its early stages in San Diego Superior Court. The business has denied any wrongdoing in court filings.

NRA: ‘No impact on crime’

Gun-rights advocates have criticized the ability of such laws to make a meaningful impact against gun violence and say they add to the state’s confusing matrix of gun laws.

“SB 715 makes a number of changes to existing law that ultimately will have no impact on violent crime and will simply make it more difficult for law-abiding individuals to understand what is allowed and required under the law,” the National Rifle Association wrote to legislators.

The NRA also questioned the outsized focus on the validity of a hunting license, noting the underlying educational component only needs to be completed once during a hunter’s lifetime.

“This restriction only serves as a burden and tax on our rights,” the NRA concluded.

“This legislation is an important step to protecting the public safety of communities in California,” Everytown for Gun Safety wrote to lawmakers.

It’s impossible to know if the law, were it in place, would have entirely prevented the shooting in Poway, or merely delayed it. Portantino said such debates are a “zero-sum game.”

“You can never project what is preventative,” he said. “We do know that, overall, states with more strict gun regulations have less of these shootings. We know the sheer volume of our efforts make a difference.”

Portantino has focused much of his recent gun legislation on the under-21 age group.

Federal crime statistics show that 18- to 20-year-olds commit gun homicides at a rate four times higher than adults 21 and older do, according to an analysis by Everytown for Gun Safety.

A California law that went into effect Jan. 1, 2019, raised the age limit to 21 for buying long guns without a hunting license, matching the requirements for handgun sales. That was motivated by the 2018 mass shooting at a high school in Parkland, Fla. Another law prohibited those under 21 from buying centerfire semiautomatic rifles — such as the kind used in the Poway shooting — even with a valid hunting license. That law was passed in the fall of 2019 but went into effect earlier this year.

Meanwhile, as new legislation is ushered in, prior gun laws continue to be challenged by gun owners in the courts, including the federal bump stock ban.

Major parts of California’s strict gun regulation scheme — including its ban on assault weapons and large-capacity magazines — have been dismantled in recent court opinions by a San Diego federal court judge. Those cases are now under appeal, as are others that are waiting to be decided by the 9th U.S. Circuit Court of Appeals.

This is the second time Portantino has tried to get a hunting-license validation law enacted. Newsom vetoed a similar proposal last year.

In his rejection letter, the governor didn’t argue with the aim of the law but instead blamed its failure on logistics. He said it would take the DOJ 30 months to update its technology to include checks with the California Department of Fish and Wildlife, and that other projects were already in the works to align with seven previously enacted gun-related laws.

“I am concerned that adding an information technology project will impede DOJ’s ability to perform the work it has already been tasked,” Newsom concluded.

Portantino said the legislature worked closely with the agencies involved to resolve logistical concerns. The law’s delayed start date will give the DOJ’s Bureau of Firearms time to prepare for the new background-check requirement.

The bill also includes a separate piece that authorizes the attorney general to conduct an independent investigation into a police shooting when there is a viable dispute about whether the person shot by law enforcement was armed or not.

Altogether, the DOJ projects the measure will cost between $4 million and $14 million annually, depending largely on the number of police shootings it might have to investigate. The bill would also require 13 to 56 new positions, as well as computer-system upgrades. The costs also take into account the possibility of litigation surrounding the law.

The DOJ has repeatedly struggled to implement or maintain some gun-monitoring programs. When gun owners were required in 2018 to register weapons with bullet buttons so they could continue to be legally possessed, widespread glitches in the state’s computer system prevented many from doing so. A subsequent lawsuit ended with an agreement to re-open the registry window for 90 days, beginning Jan. 13, 2022.

The DOJ has also been unable to keep up with an effort to recover thousands of guns from people who are registered owners but have since lost their right to own them under state law due to criminal convictions, mental health issues or active restraining orders, according to a recent investigation by the journalism nonprofit CalMatters.