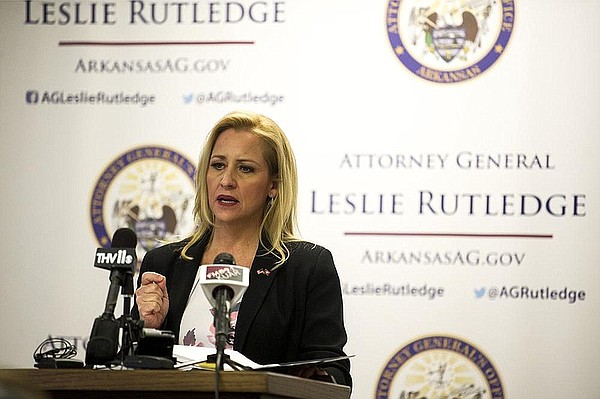 A lawsuit accusing Attorney General Leslie Rutledge, a Republican contender for governor, of using her office to pursue her political agenda — and illegally spending public funds to do so — over the needs of the state survived its second legal challenge Tuesday when Pulaski County Circuit Judge Chip Welch refused to dismiss the case.

State lawyers who have labeled the litigation a political stunt have promised to appeal to the Arkansas Supreme Court any decision by the judge that does not recognize Rutledge is immune from suit. They argue the courts don’t have the power to control how the attorney general’s office operates, stating that the law only allows two things to curb the attorney general’s authority — voters or the General Assembly.

An eight-member taxpayer group filed suit in February claiming that Rutledge has no legal justification to intervene in out-of-state lawsuits involving the presidential election and the National Rifle Association, among others.

The suit also accuses Rutledge, the first woman and first Republican attorney general, of using a public-service advertising campaign as a shadow effort to promote her run for governor. Further, the suit claims her participation in groups supporting former President Donald Trump, such as the Lawyers for Trump and The Rule of Law Defense Fund, was illegal.

They want the courts to force Rutledge to repay the state whatever her office has spent following her orders.

Two-thirds of the lawsuit was ordered dismissed in June with the provision that the plaintiffs could preserve those issues if they could present more proof of their claims. The group claims to have done so by amending its lawsuit within a week of that order.

‘You don’t need an AR-15’: A look at some of Biden’s most inaccurate remarks about firearms and 2A supporters
Colorado lawmakers to consider ban on semiautomatic weapons
Bill to keep guns out of hands of minors passes first committee
ILA | Santa Fe City Council Votes to Create Untold Number of “Gun-Free Zones”
The myth of America’s love affair with guns