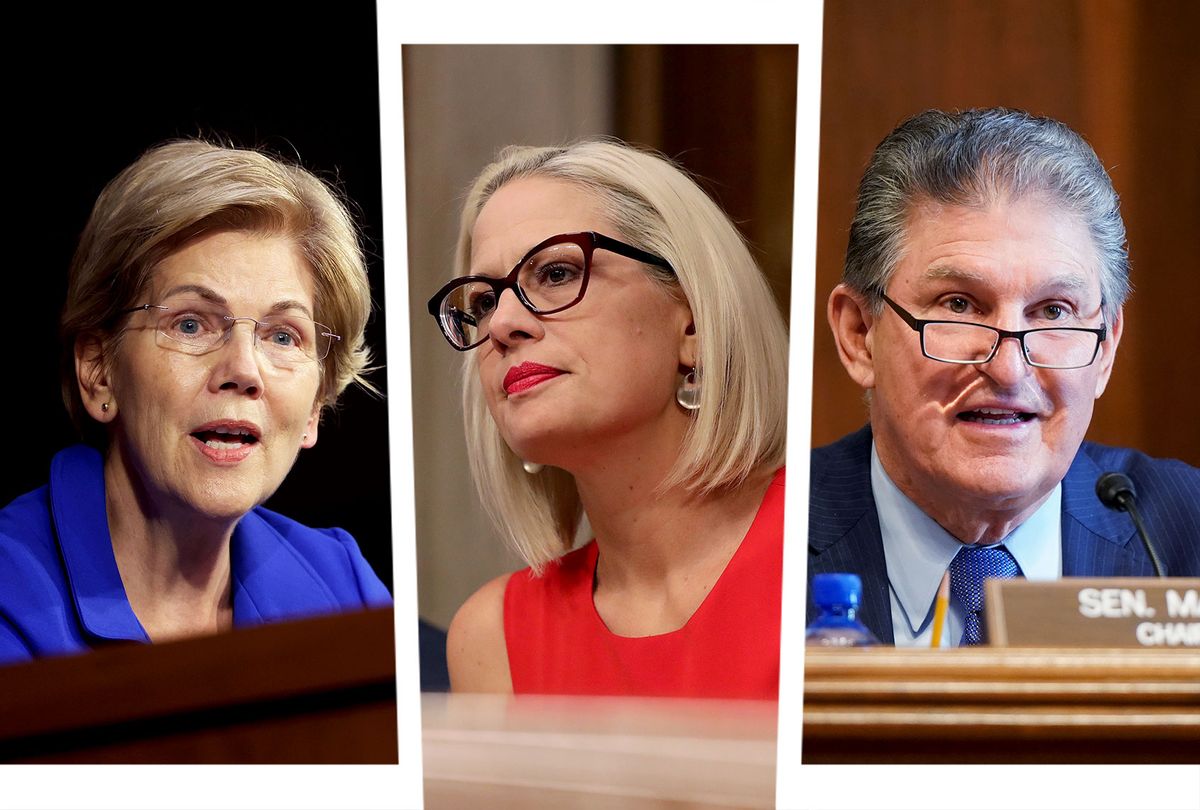 During the 2020 Democratic primary, Sen. Elizabeth Warren made fighting corruption her number one priority. It may not have seemed that way in the press, which tended to characterize the senior senator from Massachusetts as a female Sen. Bernie Sanders. Most coverage focused heavily on her bold economic ideas, such as a wealth tax. But when she was actually asked what her major focus in politics was, Warren never hesitated to say that fighting corruption should come first — because of her commitment to passing progressive economic policies.

“The rich and the powerful have been calling the shots in Washington forever and ever,” Warren told Vox’s Ezra Klein in 2019, explaining why she was intent on passing a massive anti-corruption bill meant to curtail the influence of lobbyists and influence of moneyed interests on Capitol Hill.

“Look closely, and you’ll see — on issue after issue, widely popular policies are stymied because giant corporations and billionaires who don’t want to pay taxes or follow any rules use their money and influence to stand in the way of big, structural change,” she wrote in her plan announcement.

Warren’s view is, sadly and perhaps surprisingly, not popular. Republicans clearly don’t view corruption as a bad thing these days — that’s one more reason why they love Donald Trump. But even on the left, where everyone says they’re against corruption and voters in particular always sign off on the idea that ending corruption is a good idea, there’s a gulf between saying you’re against it and actually working to eradicate it. If more agreed with Warren to make corruption a priority target, we might not be watching President Joe Biden’s bold agenda slowly fall apart now.

Want more Amanda Marcotte on politics? Subscribe to her newsletter Standing Room Only.

When it comes to brass tacks, not enough people are willing to put in the effort required to make fighting corruption a real agenda item. Activists are more likely to put their time into causes like health care and climate change. Democratic politicians, when they get power, are also attracted to policy fights that offer tangible rewards, such as increased social spending, rather than the more abstract and far-flung discourse about lobbyists and corruption. And voters definitely reward politicians for these priorities, which is one reason why Warren lost handily in the primary to Sanders and Biden.

But as the current debacle playing out on Capitol Hill demonstrates, Warren was right all along. Democrats and their voters may want to pass progressive legislation that addresses wealth inequality, climate change and lack of health care. But corrupt business interests keep stopping them. It’s like trying to make a dress when someone keeps stealing your sewing machine. You can have the pattern and the fabric and the vision, but if you don’t have the means to put it all together, you will never get that dress made.

Biden and Sanders are learning this the hard way as their dual vision for the Build Back Better plan — an expansive set of bills meant to address climate change, reduce poverty, ensure child care, expand health care, and build up American infrastructure, among other things — teeters on the edge of collapse. After spending months carefully constructing a two-track plan where moderate Democrats would support the progressive agenda, in exchange for progressives supporting the moderate agenda, a handful of centrist Democrats in the House and Senate are about to blow the whole thing up by reneging on their end of the bargain. And while there are multiple reasons for this backstabbing behavior, it’s hard not to notice that the undue influence of lobbyists.

The two biggest names in the Senate Betrayal Caucus are, of course, Joe Manchin of West Virginia and Kyrsten Sinema of Arizona. Both are throwing their weight around, clearly trying to derail Biden’s agenda while claiming to have no such intention. Instead, they come with an endless array of incoherent, even nonsensical, explanations as to why they can’t just suck it up and vote for the two-bill track the Democratic caucus agreed to vote on. There’s now an entire cottage industry built around psychoanalyzing these two: What do they want? What will get them to “yes”? Why won’t they just tell us what they want, so we can give it to them? Why are they making so little sense?

Everyone has a favorite reason, but the likeliest is the boring one: They’re being dodgy because they don’t want to be honest about their real motives. Looking at their track records, it’s hard not to notice that both deeply enjoy being wined and dined by some of the sleaziest lobbyists and fundraisers on Capitol Hill. Manchin, for instance, blew off fellow Democrats begging him to support voting rights in favor of going to a fundraiser held by oil and gas executives who have a financial interest in keeping working people from voting. Sinema is deep in cahoots with industry lobbyists who want to tank Biden’s agenda, holding fundraisers with anti-Biden groups and taking money from the pharmacy industry, right before doing an about-face to block fair pricing drug policies she previously claimed to support.

It’s not just those two. The price control policy for pharmaceuticals is one of the most wildly popular items in the Biden agenda — at least with voters. But a small group of Democrats in the House pulled that item out of the bill, and they’re barely trying to pretend it’s for any reason other than to appease pharmaceutical lobbyists. They likely know that politicians and voters may say they oppose corruption, but that actually doing something to stop it never becomes a priority.

Lobbyists have Sinema’s ear, but her own party and voters do not. The Democratic party in Arizona is threatening a vote of no confidence against her, and her response was somewhere between a shrug and throwing them the finger. Activists are crowdfunding for a primary challenger against her. It is possible she is such an egomaniac that she thinks she’s going to have a great re-election after teeing off her own voters, of course. But it’s also hard not to wonder if she isn’t influenced by the knowledge that she’s all but guaranteed a well-heeled job in lobbying if she loses re-election. Notably, a lifetime ban on politicians becoming lobbyists is part of Warren’s anti-corruption bill. If it was law, then Sinema might be making more pro-voter choices, rather than treating her constituents as an annoying inconveniences.

Want more Amanda Marcotte on politics? Subscribe to her newsletter Standing Room Only.

Corruption isn’t a sexy issue, but focusing attention on it can pay huge dividends when it comes to advancing progressive causes. Take gun control, for instance. Decades of rational argumentation and emotional appeals did little to move the needle, policy-wise. Even in the face of children being murdered in schools repeatedly, Republican politicians have successfully blocked all bills, and Democrats didn’t even bother making it a priority when they got power. Eventually, however, gun control advocates started to look away from the ideological arguments and toward the influence of the gun industry, through its main lobbying arm, the NRA.

Once they did that, real progress started to happen. Investigations revealed that the NRA was a thoroughly corrupt organization and that its leadership was on the take. Then the lawsuits started to fly. Now the organization is in very real danger of collapse — not because of its views, but because of its corruption. It might be too late, and Republicans may be too dug in on their gun mania to ever start to moderate. But without the NRA in their ear all the time, there could be a real chance to persuade even just a few Republicans to support common sense reforms that are backed by the majority of Americans. But only if the NRA is gone — and coming at them from a corruption angle was the path to this possibility.

It’s admittedly a tough sell, even to Democrats. Most Democrats have been happy to back bills that tackle the issue in similar ways to what Warren proposes, and many seem to understand that they would benefit from a more level playing field, where wealthy interests have less influence over policy and politics. Still, as with most legislation that Democrats want to pass, anti-corruption bills have been torn apart on the shores of the filibuster. And the two people who are doing the most to make sure the filibuster remains and anti-corruption bills have no chance of passing? You guessed it: Manchin and Sinema. Corruption on Capitol Hill is a grotesque a house of mirrors, and until that changes, real progress will be an impossibly tall hill to climb.