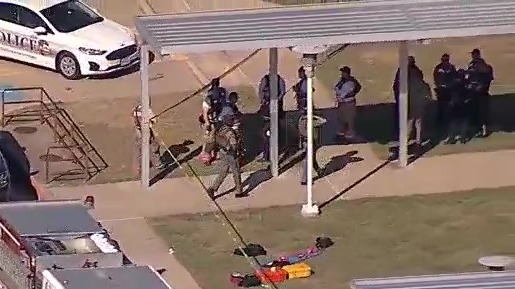 AUSTIN (KXAN) — In the aftermath of Wednesday morning’s shooting at Timberview High School in Arlington, many are pointing to Texas’ permitless carry gun law, which went into effect Sept. 1. The law allows Texans aged 21 and older to carry handguns in public without needing a license. While House Bill 1927 still requires background checks and excludes felons from possession, the law remains highly controversial.

In a statement Gov. Greg Abbott said, in part, “As law enforcement continues their investigation, our hearts go out to the victims of this senseless act of violence… I ask all Texans to join Cecilia and me in praying for the victims, their families, and the entire Timberview High School community.”

But Wednesday morning, HB 1927 and Abbott were swiftly brought into the conversation online.

“Today in Abbott’s Texas: School mass-shooting in Arlington Texas. Abbott and his donors are loving every bit of the horror, death, violence and lifetime of trauma inflicted on Texans” — @dfw_gal.

“Listening to the coverage of the school shooting in Texas and how well prepared we are and becoming enraged. It is not f—— normal to have to be prepared to be shot in school. Do not normalize school shootings!” — @fred_guttenberg. Guttenberg’s child Jaime was killed in the Parkland mass shooting.

“Another school shooting in #Arlington #Texas. Our current #Texas leaders are not protecting our children. Let’s vote out this NRA darling. Greg Abbott is a failure” — @tina_michelle9.

“ACTIVE SHOOTING IN DALLAS YET AGAIN!!! Abbott may want to eliminate shooters in addition to the rapists he “claims” he will eliminate” — @MarTheResister.

“How many hours before Greg Abbott is out here explaining to us how we need more guns and forced births to solve this school shooting situation?” — @ReneeStLouis.

“Texans are heartbroken and outraged by news of the shooting at Timberview High School in Arlington. Please join Jan and me in praying for all the victims to make a full recovery, and for their families and friends. Please also join us in prayer for our brave law enforcement officers who put their lives on the line to protect us every day” — Lt. Dan Patrick

In a press conference Wednesday, Sen. Ted Cruz spoke on the incident, stating, “All of us are lifting up in prayer the students, the teachers, the first responders and the parents. There have been far too many of these at far too many schools and so we are grateful for the courage and heroism of the first responders. We are hopeful that all of the students or individuals who may have been injured will come through and survive.”

Timothy George Simpkins was taken into custody without incident after the shooting, the Arlington Police Department said. He was booked in the Arlington jail on three counts of aggravated assault with a deadly weapon and is being held on $75,000 bail.