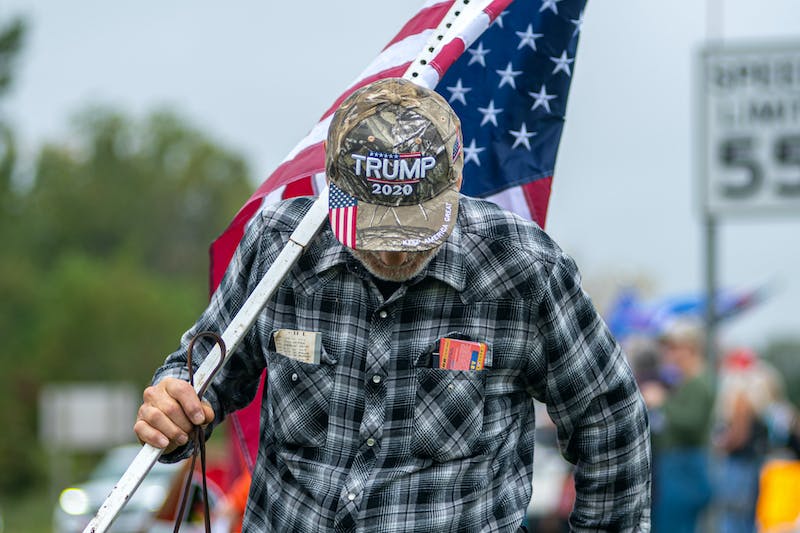 The “Stop the Spending” rally began at 10 a.m. in Howell, Michigan, prior to Biden’s visit. Supporters of President Biden were also present to show support for the president.

Michigan COS is a group that aims to reduce the power of the federal government through Article V of the Constitution, which outlines how a majority of states could propose and possibly ratify amendments, bypassing Congress.

Secretary of the county’s Republican Party Paul Funk said he is concerned about what he perceives to be excessive government spending.

“I got grandchildren, I don’t want them saddled with debts,” Funk said.

Trump supporters filled much of the grass along the street of a four-way intersection, save for a quadrant where Biden supporters stood. Protesters waved American flags, the famous Gadsden flag, which reads “Don’t Tread On Me,” and flags that read “Trump Won” and “F—” Biden.” A man in a tractor with a young girl next to him drove by a few times, the tractor’s scoop carrying a sign that read “No Biden.”

In addition to objections to government spending, protesters at the rally expressed concern in a variety of areas, including the 2020 presidential election.

“We know who the real president is,” Candi Grubb, another protester, said.

Protester Kim Jurincic said Trump won, but she believes it will take time to prove it and get him back in office.

Many protestors also said immigration was an important issue to them.

“I have a place up north that I go to, and there seems to be quite a few people that are not like us in the mix,” Grubb said.

Jurincic expressed a similar sentiment; she thinks Biden will give money, homes and jobs to immigrants. She said her great-grandparents immigrated to the United States legally, and she believes today’s immigrants to America should do the same.

“If illegals want to come here, do it legally,” she said. “I don’t have a problem with that.”

Jurincic also criticized Biden’s withdrawal from Afghanistan, particularly regarding the refugees brought to the US by plane.

“He didn’t do any vetting, so we know ISIS is on those planes,” she said. “What these illegals need to do are go back to their countries and take them over,” she said. “It’s simple.”

Across the street from the bulk of the Trump supporters, Biden demonstrators stood with flags and signs, most of whom said they were there to support the president’s visit.

Two of these protesters, Renee Snyder and Diane Detter, said they began feeling unsafe when a few Trump supporters crossed the street and confronted them. The pair said one Trump supporter was walking around their area with a chainsaw; another sounded a bullhorn in their faces.

Detter felt like the pro-Biden counterdemonstrators were being driven out.

Do you want the news without having to hunt for it?
Sign up for our morning s’newsletter. It’s everything your friends are talking about and then some. And it’s free!

“Everybody has the right to be here and (the government spending protestors) just made it very unsafe,” Snyder said.

Al Strasser, a Biden supporter, called the conflict a disgrace for the country. He described himself as holding a mixture of ideologies — he is a member of the NRA, owns guns and has a son in the Navy.

“I served in the military so that we could have disagreements, and be one country,” Strasser said. “I don’t understand why one people have to come over and harass another. Why can’t we just show our support, no matter which side, without being nasty to each other?”

Biden and Trump supporters alike expressed surprise towards Biden’s choice of Howell as a visiting place.

Strasser was surprised but glad Biden was coming. He liked to see a president in a small town.

Tath said she was also surprised Biden chose Howell, but she thinks it may have been a show of support for Howell’s immigrant population.

State government reporter Sheldon Krause contributed to the reporting of this story.