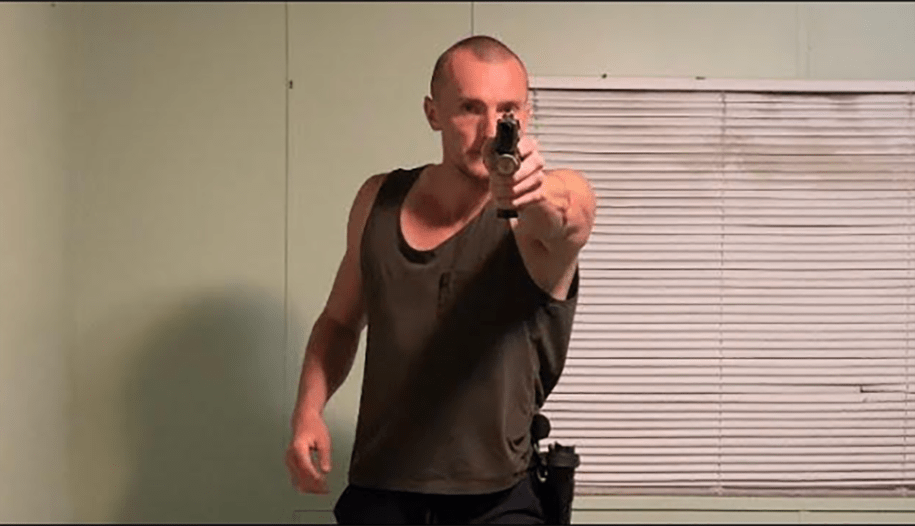 Bergquist shot and killed a security guard, Jo Acker, 26, of Caldwell, and a Latino man, Roberto Padilla Arguelles, 49, who lived in Rupert. (Acker was transgender; the family of Arguelles, an immigrant from Mexico, is holding a fundraiser so that his remains can be returned home.) Bergquist also wounded two women inside a store in the mall, then proceeded outside where he exchanged gunfire with police; a woman inside a nearby car was wounded, as was one of the police officers.

Police have not yet determined a motive for the shooting rampage but this had not been their first encounter with Bergquist.

On April 2, Bergquist entered the office of Idaho Gov. Brad Little in the Statehouse in Boise and asked for an interview, saying he wanted to query the governor about his thoughts on convicted felons like himself being able to carry guns. A state trooper who observed the interaction and then sought guidance from the Ada County prosecutor’s office was advised that Bergquist was within his rights to do so under Idaho law.

Over two weeks later, on April 17, Bergquist showed up at an unpermitted antifascist protest against police brutality with a handgun in a holster strapped to his waist. Participants in the protest took his photo because he “gave off a dangerous vibe,” according to sources who were present. The marchers did not confront him, and instead continued on their route through downtown Boise.

Bergquist, marchers said, followed them from a distance. Activists noted that Bergquist’s presence came shortly after his encounter with police inside the Statehouse.

“They specifically told him he was all good to be gunned up, and he rolls out immediately to greet us,” one of the marchers said. They described Bergquist as having an “expressionless face.”

At the same march, Boise police ticketed the marchers for violating the city’s noise ordinance. One of the demonstrators, Ty Werenka, later contested the ticket in city court as unconstitutional, and won when the judge—who noted that the officer, Desmond Hooks, failed to handle standard procedure by issuing a warning, and that police failed to hand out similar tickets in situations that more commonly violate the law—ruled that the citation was “discriminatory.”

“Being treated differently by the police isn’t something foreign to me and it definitely wasn’t a special occurrence that day,” Werenka messaged Daily Kos this week. “The judge, my attorney, and I all came to the conclusion that Desmond Hooks treated me differently than he normally treats folks allegedly violating the city noise ordinance because he admitted to it himself in court.

“He proudly stated that he gave me no warning (despite admitting that it was common practice), didn’t investigate if we had a permit, and didn’t check to see if the demonstration fell within the outlined exceptions in the city code (it did). Hooks came by Boise Mutual Aid less than a week later and told me that he would ‘jam up’ the people receiving aid if we didn’t tell him where an individual he was looking for was located.”

It was an Idaho State Police trooper, rather than Boise police, who dealt with Bergquist on April 2. In a redacted report, Trooper James Love described how Bergquist entered the statehouse with a holstered handgun on his hip and then admitted he had a felony conviction in Illinois. Love said he asked Bergquist why he was carrying a gun if he was a felon, but Bergquist replied that he was allowed to do so under Idaho code 18-310, and urged the trooper to check it out.

Bergquist told the governor’s receptionist that he wanted to interview Little because he was “trying to get the word out to others that they too could carry in Idaho.” Love referred the information to the Ada County prosecutor, who informed him that under Idaho law, Bergquist was permitted to possess firearms there.

On social media, this particular cause was Bergquist’s preoccupation—along with an animus towards Latino people, Black people, and hip-hop music. Though he had a Facebook account on which he mostly kept personal photos, his primary activity was on YouTube, where he operated a channel called “Guns N Rodents.” His “About” text, posted in February 2018, reads, “I am a Convicted Felon that is a Boise, Idaho resident in the USA,” and explains how his videos from his time in Illinois involved “my interactions with squirrels and raccoons.” Then he launched into an all-caps screed:

GUNS N RODENTS MAINTAINS A ZERO TOLERANCE POLICY TOWARDS GHETTO BLASTERS AND GENERAL HISPANICS! YOU WILL BE BLOCKED, BANNED & DELETED—WHICHEVER IS MOST APPLICABLE. NO NEGOTIATIONS.

THIS MEANS MINORITIES ARE NOT WELCOME HERE!! GET OUT OF HERE AND DO NOT VIEW ANY OF MY VIDEOS!! GO BACK TO SH*THOLE GUATEMALA.

In a rebooted version of the channel, Bergquist explained: “This channels main dedication is towards repealing the prohibited possessor list in various states throughout the union.”

The cause of enabling convicted felons to have their firearms rights restored has long been a cause of so-called “Second Amendment” absolutists who contend that the Constitution prohibits any gun regulations whatsoever, including the National Rifle Association and the far-right Gun Owners of America. The same ideology has also become a major conduit of recruitment of gun owners into white nationalist and other extremist ideologies, and it proved to be a central factor in the radicalization of the insurrectionists who attacked the U.S. Capitol on Jan. 6.

But gun rights extremism has long had a large constituency in Idaho, resulting in some of the most lax gun ownership laws in the nation. In 2014, Idaho passed a law—which was passed unanimously in both the House and the Senate—declaring the state no longer had to abide by federal gun laws going forward. It also criminalized the enforcement of federal gun laws. Such laws, as The Atlantic explains, are unconstitutional on their face, but they have not yet been challenged in court. (The Supreme Court recently declined the case of a felon seeking to overturn a lifetime gun ban.)

In 2016, gun rights extremists led by Gun Owners of America held a rally at the statehouse demanding legislators pass a law allowing unpermitted open carry of firearms; the rally was populated by a range of militia enthusiasts and other patriot movement followers. The law was passed with broad support, and went into effect in July that year.

The result of these laws is an environment in which far-right extremists are empowered by authorities to use their guns to intimidate their political opponents, as Bergquist did in April. More insidiously, they have created an environment in which police forces—which increasingly have been demonstrating their sympathy with such extremists—actually green-light their threatening behavior, which is invariably directed at vulnerable minorities and the broader community.

“The police here have the ability to act with impunity because so few people actually have the will or the ability to fight back,” Werenka observed. “There are multiple murders and shootings carried out by the police in this state every year that never have their camera footage released because political leaders (elected and unelected) are more concerned with giving lip service to ‘diversity’ than they are with fostering a community where it is actually safe to be a minority. The cops here use drones to flush out and and find people sleeping outside and shoot people in crisis who need real help. It’s pretty fucking grim and all of it disproportionately hurts the marginalized communities here.”

Only a few hours after Bergquist unleashed his lethal rampage, an audience member at a Turning Point USA event asked speaker Charlie Kirk: “When do we get to use the guns? … How many elections are they gonna steal before we kill these people?”

There is no evidence that the inquirer (later identified by Redoubt Antifascists and an activist named Danesh on Twitter as Zackary Fettel, a Boise area resident) had any connection to Jacob Bergquist or his rampage. But on a deeper level—the one at which the radicalization of the American right is engendering eliminationist violence—they are profoundly connected.