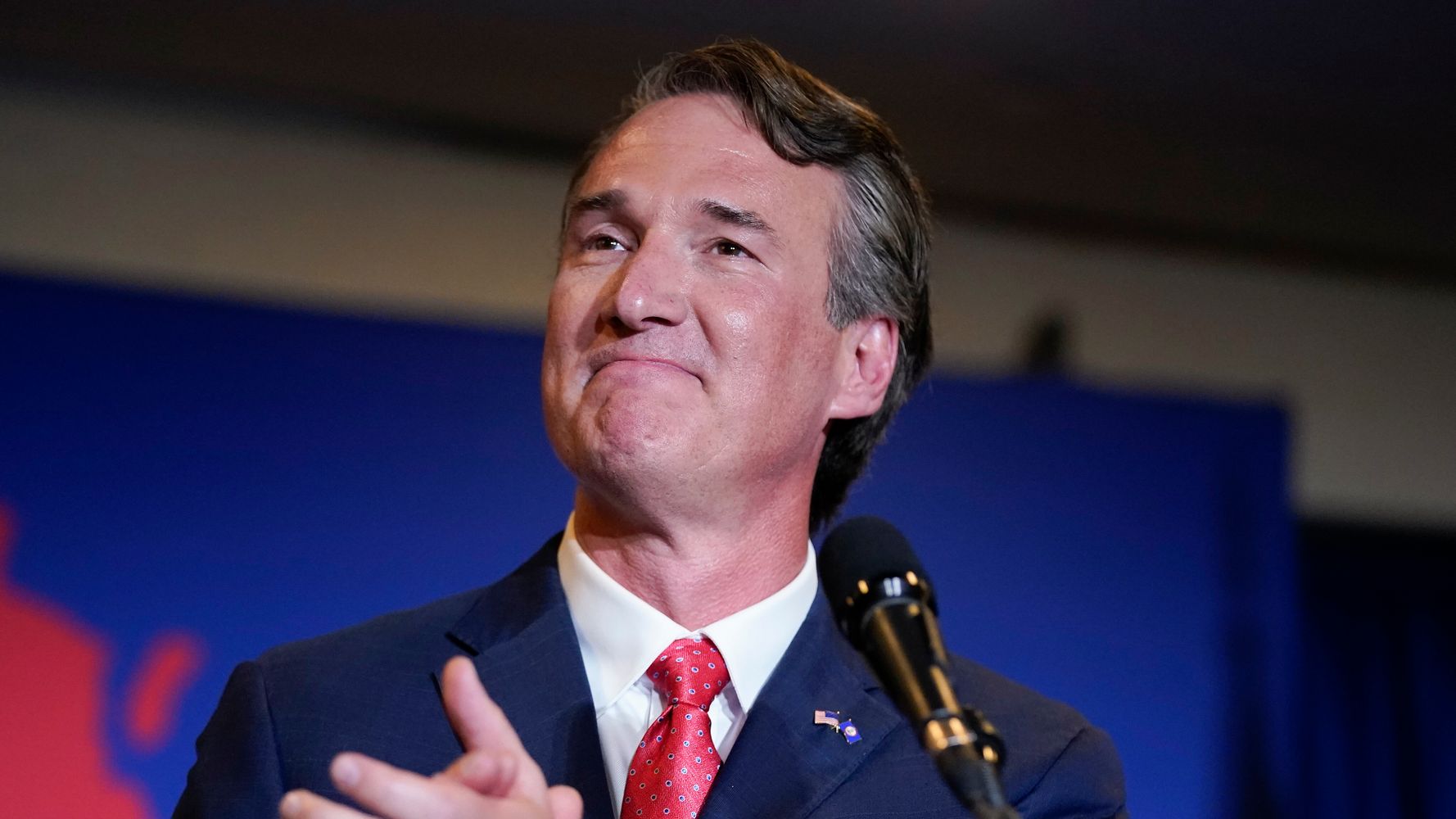 Glenn Youngkin did something unusual for a Republican candidate: He kept the National Rifle Association at arm’s length during his campaign for Virginia governor.

Youngkin, who is a lifetime member of the NRA, declined to fill out the group’s candidate endorsement questionnaire.

The NRA, which is based in northern Virginia, responded accordingly. In July, the NRA announced that it was endorsing the Republican candidates for lieutenant governor and attorney general ― Winsome Sears and Jason Miyares ― but staying out of the gubernatorial contest.

At the time of the NRA’s announcement, Youngkin’s campaign said he simply wasn’t “spending all his time filling out surveys.”

“Politicians love to fill out surveys, so Glenn ― who isn’t a politician ― didn’t spend all his time filling out surveys and instead spent the entire campaign meeting directly with voters, listening to their concerns, and telling them exactly what he believes,” Porter said in a statement. “As part of his Day One Game Plan, Glenn committed to protecting our constitutional rights, and he intends to keep that promise.”

But gun safety advocates don’t buy Youngkin’s explanation. They believe that Youngkin’s decision was strategic, to maximize his appeal to moderate Democrats and independents. And they argue that it indeed helped him defeat Democratic nominee Terry McAuliffe.

“He knew that gun politics have changed in the state of Virginia,” said Shannon Watts, a McAuliffe supporter and founder of the gun safety group, Moms Demand Action. “He did everything he could to distance himself from the gun lobby. That has to be truly humiliating for NRA leaders in their own state.”

As evidence of her thesis, Watts noted how Youngkin won by a larger margin than Sears and Miyares, both of whom also won. (Youngkin may have also benefited from the presence of a left-leaning, third-party gubernatorial candidate’s negative impact on McAuliffe.)

Youngkin did perform better with self-described “moderate” voters than Ed Gillespie, the state’s Republican gubernatorial nominee in 2017. Youngkin received 39% of the moderate vote, compared with 33% for Gillespie, according to CNN’s exit polls.

The McAuliffe campaign declined to comment for this story, and the NRA did not respond to a request for comment.

Youngkin’s “campaign was all about going for the independent or moderate vote, which does not embrace extreme positions on guns,” said Lori Haas, a Richmond-based gun safety activist whose daughter survived the 2007 mass shooting at Virginia Tech.

Ahead of the 2021 election, half of Virginia voters wanted the state’s gun laws to be even stricter, and another 28% wanted them to stay the same, according to a poll commissioned by the group Everytown for Gun Safety, an umbrella group funded by former New York City Mayor Mike Bloomberg of which Moms Demand Action is a part.

Youngkin may also have been reacting to Republican losses during the 2019 legislative elections, when Democrats took over the state House of Delegates and state Senate.

Thanks to Republican control of the legislature and even some squeamishness among Democratic lawmakers, the state failed to adopt any major gun reforms after the 2007 massacre at Virginia Tech, which killed 33 people and was the deadliest mass shooting in the country when it occurred.

“This is a temporary setback. We have made huge progress on gun issues in this state.”

Then, in May 2019, a Virginia Beach city employee shot up a municipal building, killing 12 people. The mass shooting sparked new calls for Virginia to adopt tougher gun regulation, including closing the state’s loopholes allowing some gun buyers to circumvent background check requirements.

The Republican obstruction allowed gun safety to become a campaign issue for Democrats, whose biggest growth areas were in Washington’s and Richmond’s socially liberal suburbs.

With the help of federal court-ordered redistricting that created a more favorable map for Democrats and cash from Bloomberg, Democrats ran on promises in 2019 to make it harder for people with histories of mental illness and crime to purchase deadly weapons. And perhaps more important, they called for voters to punish Republicans for blocking broadly popular changes.

The campaign of Sheila Bynum-Coleman, a real estate agent whose daughter survived a shooting, against then-state House Speaker Kirk Cox (R), was emblematic.

“During the special session on guns, Speaker Cox worked for the gun lobby, not us,” Bynum-Coleman said in an ad as text appeared on screen declaring that Cox had “cozied up to the NRA.”

At least one incumbent Republican, state Sen. Siobhan Dunnavant, kept the Democratic tide at bay in part by embracing a state-level ban on “bump” stocks that she had previously voted against.

While Dunnavant survived, Bynum-Coleman and a number of other Democrats won, handing the party control of both legislative chambers for the first time in decades.

With the benefit of a Democratic trifecta, Northam signed a raft of seven gun regulations into law in April 2020. The bills made background checks for gun purchases universal in the state, limited handgun purchases to one per month, and enacted a “red flag” law allowing the state to temporarily confiscate the firearms of people deemed a danger to themselves or others.

McAuliffe ran this year on protecting that legacy. He also attacked Youngkin for promises Youngkin made while seeking the GOP nomination. With the goal of ingratiating himself to the GOP activists who would eventually nominate him for governor at a convention in May, Youngkin pledged not to sign any additional laws “imposing limitations on our Second Amendment,” and to support the rollback of gun regulations already passed by Democrats.

“Glenn Youngkin won’t protect people like us,” a survivor of domestic gun violence said in an ad for McAuliffe.

But as The Washington Post noted, a few weeks after Youngkin locked up the nomination, he had already begun avoiding a discussion of his views on both abortion rights and gun regulation.

To boot, there is little, if any, evidence of Youngkin’s Second Amendment commitments on his campaign website.

Youngkin even found a roundabout ― and misleading ― way to attack McAuliffe for being too soft on gun safety. In a TV ad, a sheriff backing Youngkin attacked McAuliffe for making it “easier for felons to get a gun.”

The ad cites a Washington Post headline from 2016 explaining that McAuliffe’s restoration of civil rights, including voting rights, to ex-felons, cleared a hurdle for those ex-felons to regain the right to a firearm.

A court struck down the blanket restoration of civil rights that the Post was reporting on. But his subsequent, piecemeal restoration of 173,000 ex-felons’ rights removed a preliminary obstacle to regaining a gun permit.

But if Youngkin’s campaign deliberately tried to muddy the waters about his positions on gun regulation, so did a pro-McAuliffe super PAC trying to sow doubt about Youngkin’s Second-Amendment bona fides among conservative voters in rural parts of the state. The group, Accountability Virginia, which received $200,000 from the utility monopoly Dominion Energy, targeted voters in rural Virginia with Facebook ads noting that the NRA had endorsed former President Donald Trump, but not Youngkin.

“If we can’t trust Glenn Youngkin on guns, what can we trust him on?” one of the ads asks.

Gun safety advocates have no illusions about Youngkin’s true views. While narrow Democratic control of the state Senate will likely limit the gun regulations that Youngkin can overturn, Republican gains in 2023 could open the door to much bigger changes.

“This is a temporary setback. We have made huge progress on gun issues in this state,” Watts said. “We have to come back with even more candidates running on this issue.”

Of course, Youngkin’s win is the rare loss for gun safety advocates that carries the silver lining of affirming their influence in Virginia.

Virginia Del. Dan Helmer, a Democrat who won reelection in part by touting the gun regulations he had helped pass, said that if, in the general election, Youngkin had explicitly “embraced” rolling back the laws Democrats passed in 2020, McAuliffe might have defeated him.

“I’m glad that he did not embrace those policies,” said Helmer, whose views on gun control have been shaped by his experiences as a veteran of the Iraq and Afghanistan wars.

Asked if those feelings were not contradictory, given his desire to see Youngkin lose, Helmer said he prioritized preventing gun deaths, including those of military veterans vulnerable to suicide ― and planned to hold Youngkin accountable to his general-election rhetoric.

“When we reject extremism, I am always happy, regardless of which party is doing it,” he said.