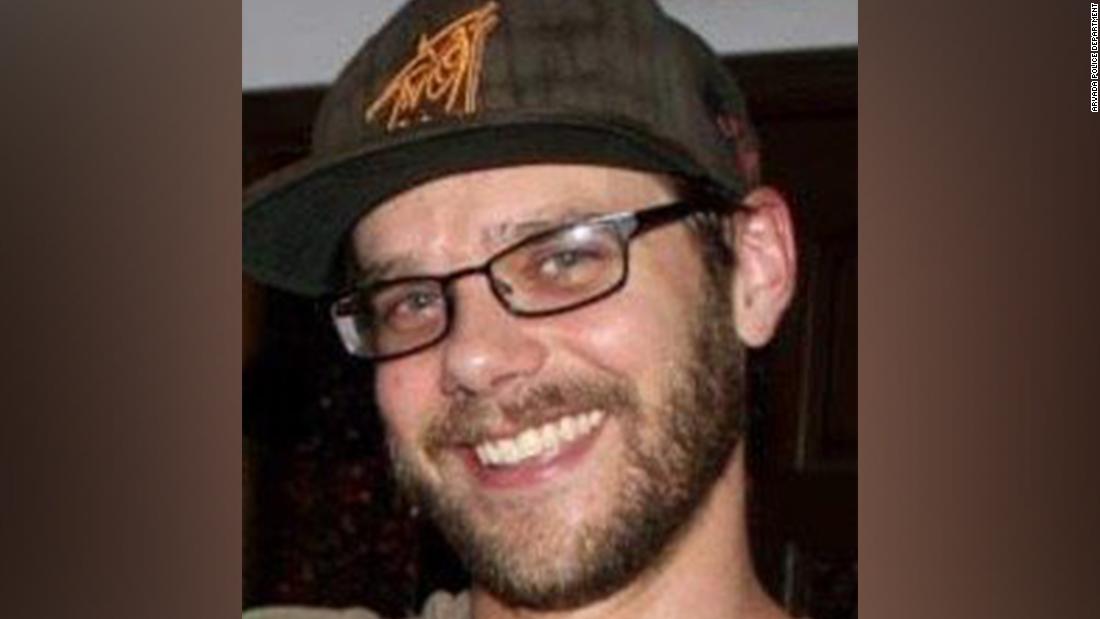 Police say that John Hurley, 40, confronted Ronald Troyke after he shot and killed Officer Gordon Beesley in the west Denver suburb of Arvada. Investigators recovered a document written by Troyke with statements revealing his intent to kill police officers, including, “Today I will kill as many Arvada officers as I possibly can.”

In a letter laying out their decision, prosecutors said that while Brownlow’s acts “were nothing short of heroic,” the facts from Hurley’s point of view show that he did not know or could not have known of officer’s death or of Hurley’s “role in eliminating the threat” posed by Troyke.

The incident underscores how laws allowing people who legally own a firearm to carry it openly in public or carry it in a concealed manner, pose an increased risk to public safety.

“If there is a weapon of any sort, not just guns, in somebody’s hands when we respond in a situation like an active shooter or an assault in progress … officers have additional pressures placed upon (them) to evaluate an awful lot of info in a short period of time and hopefully arrive at the correct answer to mitigate danger to everyone involved,” said Thor Eells, executive director of the National Tactical Officer Association.

“Now as a responding officer, I have to very quickly, and when I say quickly: seconds, milliseconds; make a determination in my mind, is this a friend or foe type of thing,” he said.

And it also exemplifies how it’s near impossible for an officer to differentiate between people visibly holding guns during active shooter situations while identifying the threat, said Warren Eller, chair of the department of public management at John Jay College of Criminal Justice.

“If you pull out a firearm or concealed weapon in the middle of some sort of active situation, you are undertaking a whole new level of risk,” Eller said. “There is no way in that kind of situation a cop can be expected to differentiate, unless there’s been some communication or unless the police officer can clearly see what’s going on.”

Eller said the latest movement nationally in gun laws is the controversial “constitutional carry” or permitless carry law, which allows people to carry a handgun in public without a license or permit.

States that require permits to carry weapons typically have an education component that exposes those carrying guns to, at minimum, some training and the state’s laws. Constitutional or open carry states do not typically require that for people to carry guns in public.

“This is not the greatest policy to have out there in large part because of the education that often comes with permits,” Eller said. “Then you get exposure to the law and the risks you’re assuming that are hugely important for someone carrying a firearm in society to have.”

Open carry can turn a tense situation into a deadly one, expert says

This comes as the US Supreme Court seems likely to strike down a New York state law that prohibits people from carrying concealed handguns in public for self-defense.

If the case brought by an affiliate of the National Rifle Association succeeds, the conservative-leaning court would allow more guns to be publicly carried in the largest city in the country and could nullify laws across the country, including those in Massachusetts and California. The current New York state law requires people to show “proper cause” before obtaining the license.

During an interview with CNN’s Jim Sciutto earlier this month, NYPD Commissioner Dermot Shea said he was worried about the outcome of the Supreme Court case.

“We have some tough gun laws here,” Shea said. “You know, we tend to think we are very progressive in how we police and how we reform and how we keep New Yorkers safe. And this particular decision, you know, worries us if it goes the wrong way.”

Lars Dalseide, a spokesman for the NRA, told CNN that there are many high-profile examples where law-abiding gun owners “have helped put an end to violent threats before law enforcement arrived on the scene, thereby saving many lives.”

“There are also countless lower-profile cases where a Good Samaritan with a gun has helped save lives,” said Dalseide.

Meanwhile, a group of 18 jurors began deliberations Tuesday in Kyle Rittenhouse’s homicide trial. Rittenhouse, 17 at the time of his actions during unrest in Kenosha, Wisconsin, is accused of provoking fatal shootings by firing his AR-15-style weapon at Joseph Rosenbaum, setting off a series of events that left two people dead and one wounded.

Rittenhouse’s defense argued that Rosenbaum had threatened and chased him, which caused him to fear for his life and act out of self-defense. Rittenhouse also shot at three other people, all of whom his attorney argued had attacked him.

If an individual is seen carrying a firearm at a protest or a store in an open carry state, there is little that law enforcement can do unless the person is acting in an illegal manner, according to Andrew Karwoski, a policy expert at Everytown for Gun Safety, the largest gun violence prevention organization in the country.

“One of the reasons that open carry is so dangerous is because it’s so difficult to enforce,” Karwoski said. “It’s hard for law enforcement when they see someone walking down the street with a military-style assault weapon to understand their intentions and respond accordingly.”

Shannon Watts, the founder of Moms Demand Action, said the nation’s relaxed gun laws have created an environment in which “everyone is assumed to be armed.”

“The consequences we’re seeing that play out in real life are the logical outcome of guns for everyone, anywhere, no questions asked,” Watts added, referencing the NRA’s “guns everywhere” agenda seeking to expand gun rights nationwide.

In more than 40 states, people can carry loaded, semi-automatic rifles in public without a license or training. Five states, including California and the District of Columbia, ban the open carry of loaded long guns, while only Massachusetts, Minnesota and New Jersey require permits to openly carry long guns, according to Everytown.

In September, a new pro-gun law in Texas that went into effect allows most Texans who legally own a firearm to carry it openly in public without obtaining a permit or training. The constitutional carry legislation is the latest in a series of pro-gun bills that state lawmakers passed this year as gun violence incidents rise in Texas and across the country.

The law applies to Texans age 21 and older and excludes people who are prohibited from legally owning a firearm, such as those convicted of a felony, assault, domestic violence or terrorist threats.

“We know by research that visible guns are more likely to make people act aggressively. And in turn that makes it more likely that everyday disagreements turn into violent conflicts,” Watts said.

Earlier this year, Texas law enforcement officials held a news conference in Austin to oppose the legislation, arguing that it makes their job more dangerous. “Gun owners have a duty to ensure that their firearms are handled safely and a duty to know applicable laws,” said Dallas Police Chief Eddie Garcia at the news conference.

On June 21, Troyke fatally shot Officer Beesley in an alley near Arvada’s Olde Town Square before returning to his truck to retrieve an AR-15 and then began walking toward the square.

Three Arvada officers, including Brownlow, were working as part of the police department’s Community Outreach Resource and Enforcement (CORE) unit, which works with an unhoused community in the area, when they heard “three loud bangs or booms,” according to King’s letter.

The suspect, later identified as Troyke, was carrying an “AR15 black carbine-style rifle with a long magazine, dressed in black, wearing an old-style ski mask and a black floppy hat,” according to King’s letter.

The officers dispersed to different parts of the office building and Brownlow stood at the east door of the building with his weapon drawn, pointed at the window as he watched Troyke walking while holding his rifle “up and by the pistol grip,” King’s letter says.

Hurley confronted the gunman in the square and fatally shot him with a handgun, according to the police statement. Meanwhile, Brownlow lost sight of the suspect and then heard a third round of gunfire but could not see him or any other individual firing a weapon. Suddenly, a man with a red shirt holding a rifle and a handgun — later identified as Hurley — stepped into Brownlow’s view and appeared to be either reloading the rifle or trying to fix something while holstering his pistol, the letter says.

Brownlow then took the opportunity to shoot him, King said. The presence of a mass shooter and the potential for a second one in the city’s square “warranted deadly force and no lesser degree of force would eliminate the potential threat,” her letter determined.

“When you’re responding to an active shooter or suspected active shooter, that incident is going to be complex and when you add in armed civilians that may not have had any safety training or a background check, may not have a criminal record, you’re going to have a complicated response,” Watts of Everytown said.

Officers responding to a situation where someone is armed have to process a lot of information in seconds or less, said Eells, of the National Tactical Officers Association.

Eells said officers have a list of considerations in weighing whether to use force, including the person’s tone of voice, body language, whether the weapon is being pointed and the distance to the person.

The association trains officers to act in defense of life, Eells said, and the safety of those in the most danger with the least ability to control their safety — hostages or bystanders — is the first priority.

Rittenhouse verdict in line with nation’s diminishing gun laws—a future that frightens activists
‘Asymmetric warfare’: Georgia GOP redraws political map as US Senate Dems do nothing
How Australia’s most powerful lobby sways votes and swings seats
The ADF is properly in our gun sights, work will be done
Greene Sponsors Bill to Award ‘Hero’ Kyle Rittenhouse a Congressional Gold Medal