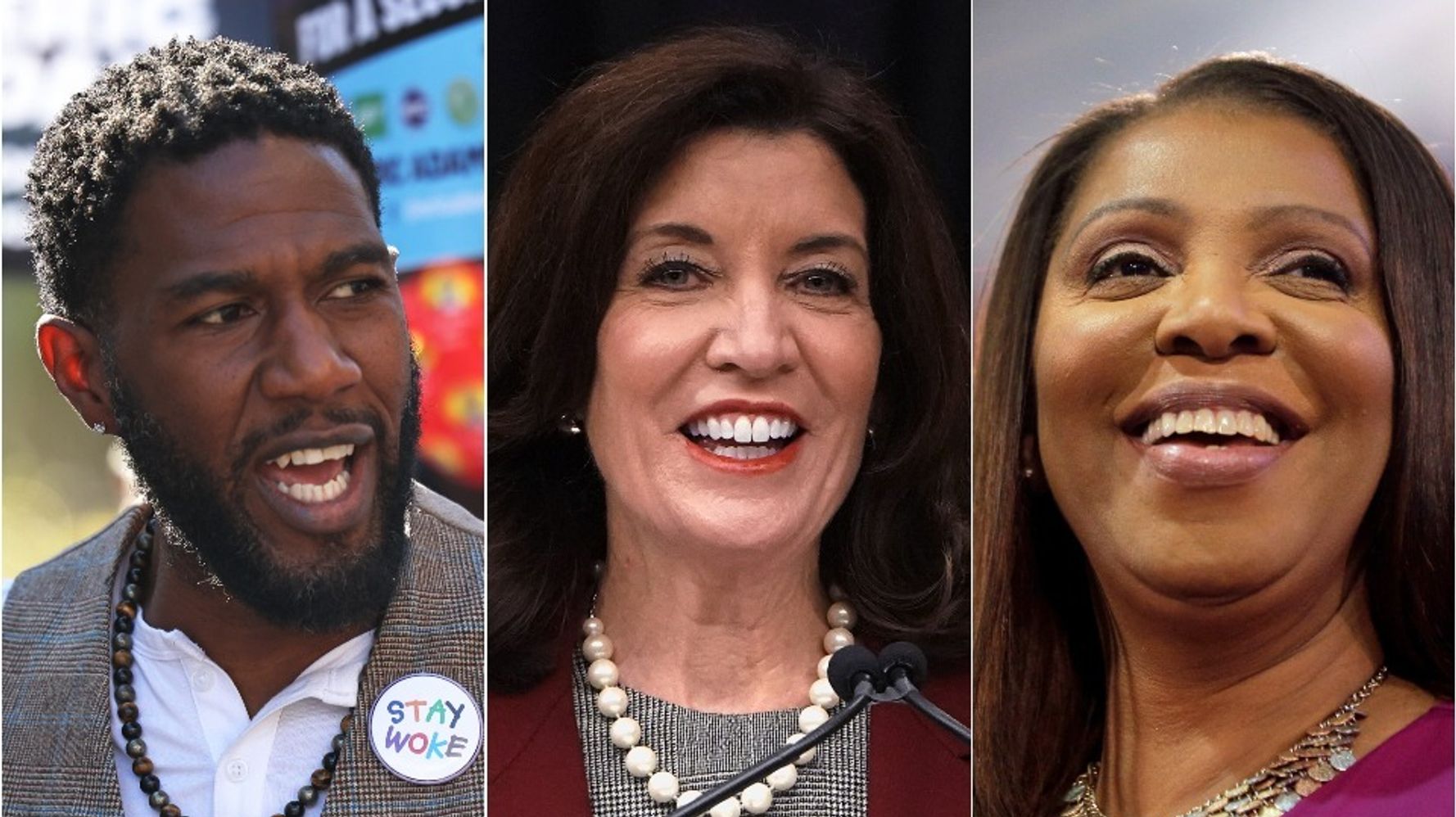 Hochul, the former lieutenant governor, has the advantage of incumbency but is only now running for a full term, after succeeding ex-Gov. Andrew Cuomo (D), who resigned in August.

James, a mainstream progressive whose investigation of Cuomo’s sexual misconduct triggered his resignation, and Williams, a left-wing Democrat with a diverse New York City base, are likely to give Hochul a run for her money. And a primary victory for Williams or James would add to the activist left’s power in a state where it has experienced massive growth in recent years.

Rep. Lee Zeldin of Long Island and former Trump administration attorney Andrew Giuliani are among those seeking the Republican nomination for governor. Given New York’s heavy Democratic tilt, whoever wins that party’s nomination is favored to become governor, even if the national environment is unfavorable to Democrats.

“This could be the moment for a progressive to take the governor’s mansion ― and an actual progressive, not just a moderate who calls themself a progressive.”

Both Williams and James — who preceded Williams as public advocate and was also a city councilwoman — are the rare progressive Democrats with deep support among working-class Black voters in Brooklyn and Queens. Those voters, who have been cooler to other left-leaning candidates, were an essential element of winning coalitions in recent statewide and citywide races.

“There is some overlap on those supporters so I am curious to see who they end up siding with,” Lapeyrolerie said.

As a statewide elected official, James enjoys a level of name recognition and influence that Williams, who ran a close but losing race against Hochul for lieutenant governor in 2018, lacks.

On the other hand, in a contest for the votes of New York’s mostly urban, hardcore progressives, Williams has an obvious edge over James. While James joined Cuomo and Hochul’s ticket in 2018, turning her back on the progressive Working Families Party, Williams has retained his credibility as a left-wing crusader. Unlike James, Williams has described himself as a “democratic socialist” and embraced calls to cut police funding.

Referring to Hochul’s consolidation of some former Cuomo donors, Alyssa Cass, a Democratic strategist in New York City, said, “This race is a test of the durability of the Cuomo network without Cuomo [in Hochul’s corner], against the newly empowered city machine behind [James] and the progressive forces that will likely align behind [Williams].”

The New York chapter of the Working Families Party, which many dyed-in-the-wool progressives look to for guidance, could nonetheless give James a boost if it returns to her side. Even after James declined to seek the party’s endorsement in 2018 ― reportedly as a condition of Cuomo’s support ― the WFP issued a dual endorsement of her alongside Fordham University law professor Zephyr Teachout, whom James ultimately beat.

Sochie Nnaemeka, state director of the New York WFP, praised James to The New York Times after the attorney general announced her bid. “Since she was first elected as a Working Families Party candidate nearly 20 years ago, [she] has been a courageous fighter for everyday New Yorkers,” Nnaemeka said.

It’s difficult to overstate the extent to which having either James or Williams in charge in Albany would mark a departure from Cuomo’s decade in the top spot. Cuomo only ever budged from his business-friendly posture and opposition to higher taxes on the state’s wealthy residents when progressives were able to force his hand. For years, he even tacitly blessed Republican control of the state Senate to keep his own party’s policy ambitions in check.

Although James and Williams are still outlining their full slate of policy proposals, they are already running on cementing New York’s protections for working-class and low-income renters. Both candidates are backing the adoption of a “good cause” eviction law that would require landlords to renew tenants’ leases in most cases and prevent them from evicting tenants without an order from a judge.

Progressives have found Hochul’s interpersonal outreach and efforts to be more transparent than Cuomo to be refreshing, but she is nonetheless running in the moderate lane.

Hochul, a former congresswoman from western New York who once opposed tougher gun regulations and drivers licenses for undocumented immigrants, has adopted her party’s leftward policy shift on social issues, but also indicated that she intends to be a few ticks to the right of her rivals on fiscal policy.

Unlike Williams and James, Hochul has declined to stake out a stance on “good cause” eviction and she recently expressed opposition to additional tax increases on the rich.

She is also standing by the state’s embattled Democratic Party chair, Jay Jacobs. Jacobs, a former Cuomo loyalist who presided over major party losses on Long Island and in other areas on Election Day, has endorsed Hochul in the primary.

Both Hochul and Jacobs frustrated progressives with their decision to remain neutral in Buffalo’s recent mayoral election, in which incumbent Mayor Byron Brown, a centrist Democrat who lost the primary, ran a write-in campaign to beat Democratic nominee India Walton, a progressive. The race has not been formally called, but Brown’s victory is all but certain.

Now progressives are waiting to see whether Hochul will continue her amicable approach to the left, or adopt a more hostile, Cuomo-like posture as budget talks heat up next year.

“Is she going to try to move some progressive policy goals while she’s in the governor’s seat as a way to win over potential votes or endorsements from the progressive side? Or is she going to move more center and run against the left?” said Gabe Tobias, a New York City progressive consultant who has not endorsed in the race but will likely back either Williams or James. “It’s kind of unclear.”

By some accounts, Hochul, the state’s first woman governor, is still the candidate to beat. She has benefited from a favorable contrast with Cuomo that has manifested in the form of overwhelmingly positive media coverage. She held a 19-point lead over James and a more than 30-point lead over Williams in a late October poll conducted before either James or Williams officially entered the race.

“It’s not easy to take out an incumbent governor ― under any circumstances. It doesn’t happen that frequently,” said Hank Sheinkopf, a moderate Democratic consultant in New York City.

Thanks to her incumbent status and relatively business-friendly posture, Hochul has also raised an eye-popping $10 million since announcing her plans to run for a full term a few months ago. And while she doesn’t have deep political roots in the metropolitan New York City area where the lion’s share of votes will come from, she is running alongside Lt. Gov. Brian Benjamin, a Black Democrat from Manhattan’s Harlem neighborhood with a fundraising rolodex of his own.

Meanwhile, Democratic losses in the 2021 elections — which did not spare New York — indicate that 2022 will be a good year for Republicans at the polls. Those headwinds could strengthen the hand of moderate Democrats, who are liable to find more receptive ears for arguments that left-leaning candidates undermine the electability of Democrats up and down the ballot.

″‘I’m the only one that can really beat Lee Zeldin in the fall’ … That’s the argument” for Hochul, Sheinkopf said.

“[James] seems to be doing a really good job reconstituting her relationships downstate.”

“If a declared socialist is the nominee for governor of New York, the path for a Republican widens immeasurably,” said Molinaro, who emphasized his personal respect for Williams.

Molinaro nonetheless maintained that James’ independence from Cuomo likely puts her in a better position than Hochul, despite misgivings that moderate voters might have about James’ progressive leanings.

“She gets credit among anti-Cuomo voters for taking him on,” he said.

Cass, who is unaligned in the race, noticed the warm reception James received at a conference for New York politicos in Puerto Rico earlier this month.

“[She] seems to be doing a really good job reconstituting her relationships downstate,” Cass said.

To wit, James locked up the race’s first labor union endorsement, securing the blessing of the Transport Workers Union, which represents New York City’s public transit workers. “In Tish James, workers will have a Governor who goes to bat for us every single day,” TWU President John Samuelsen wrote on Twitter the day she announced her candidacy.

James’ appeal extends beyond the influential domain of organized labor, however. In nearly three years as the state’s top lawyer, James has burnished her reputation as a gladiator against former President Donald Trump, the National Rifle Association, and of course, Cuomo. Months before James spearheaded the investigation into Cuomo’s alleged sexual misconduct, she issued a report exposing his administration’s efforts to conceal COVID-related nursing home deaths.

James would also be the country’s first Black woman governor, providing voters the chance to make history when casting a ballot for her.

In addition to shoring up support from her base in Brooklyn, James’ statewide experience and barrier-breaking profile are likely to help her compete for the support of affluent, college-educated liberals who backed Kathryn Garcia’s technocratic bid for mayor. At the same time, Hochul has already made her own play for the Garcia demographic by tapping Garcia to serve as the governor’s director of state operations.

“With Garcia voters in particular, do they break towards the first woman governor, towards an aggressive attorney general who took on Trump, or do they support the most prominent citywide progressive in [Williams]?” Cass said. “That’s to be determined and it will be a fight.”

Other unknown variables loom large in the primary as well. New York City Mayor-elect Eric Adams (D), a moderate who is being closely courted by James and Hochul, said on Tuesday that he plans to endorse in the race eventually. His blessing could be especially influential with the working-class Black and Latino voters in New York City who formed his base in the primary.

Additional entrants into the race could further shake up its dynamics. New York City Mayor Bill de Blasio, a progressive whose base of support overlaps with James’ and Williams’, and U.S. Rep. Tom Suozzi, a moderate Long Island Democrat who might eat into Hochul’s constituency, are both considering running.

A potential cause for concern among progressives is the prospect of James and Williams dividing the progressive vote, either easing Hochul’s path to victory, or even softening the ground for the eventual Republican nominee.

“There’s a recognition that progressives will do better if they’re not divided in the late stages of the race.”

Depending on how each of them performs in the coming months, there will likely be calls for one to drop out and endorse the other before the June primary.

“There’s a recognition that progressives will do better if they’re not divided in the late stages of the race,” Tobias said.

If Hochul wins despite progressives’ best efforts, members of New York’s activist left can take heart in the gains they have already made in state politics. The state legislature is likely to exert a progressive influence on the next governor, regardless of who he or she is.

And there is already an emerging crop of progressive candidates to replace James as attorney general. Teachout, the progressive favorite who lost to James in the 2018 primary, announced a second bid for the seat on Monday.

Daniel Goldman, who served as congressional Democrats’ prosecutor during the first Trump impeachment in 2019, announced his candidacy for attorney general on Tuesday. And New York state Senate Deputy Majority Leader Michael Gianaris (D), who has developed a progressive reputation in recent years, is also reportedly considering a run.

Tobias has endorsed Teachout. “She’s great and she can win,” he said.