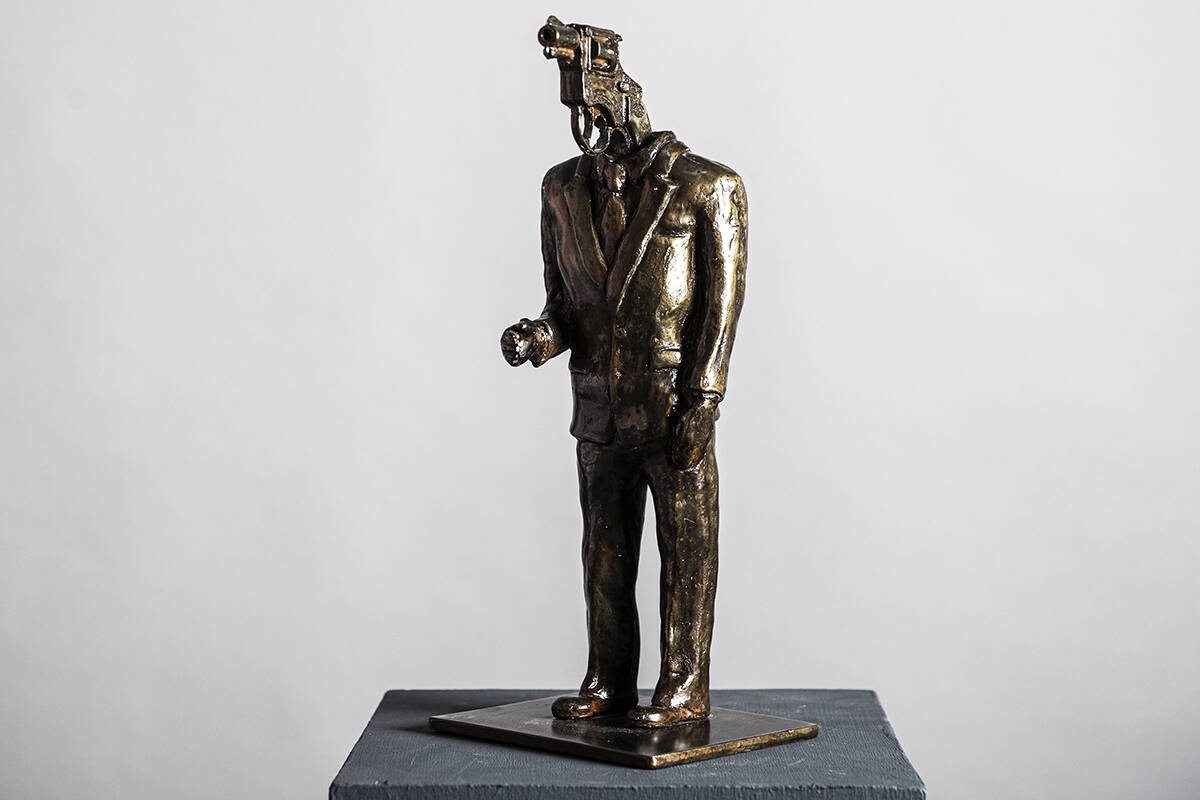 Of the many fractures spiderwebbing American life these days, some of the deepest and most divisive emanate from our disagreements over firearms, the Second Amendment and gun culture — but you know that. Everyone knows that. No need to background this interview any further … except to say that, however unlikely it sounds to many, artist and gallery owner Nancy Good believes you can extract the issue of gun violence from its hot broth of politics and passion, to look at it through a different, urgently nonpartisan lens: art. From which, she hopes, solutions might emerge.

Thus, “American Roulette,” an exhibit at Core Contemporary, her spacious gallery in the New Orleans Square section of Commercial Center (900 E. Karen Avenue, Suite D222, corecontemporary.com). On view through Jan. 8, it’s a roundup of artworks that, according to its statement, “presents provocative artwork influenced by gun culture and violence.” But not, Good is at pains to insist, in a political way or with a political agenda. Rather, the goal is to get people talking about gun violence, its traumatic effects and what can be done to curtail it.

“American Roulette” is a traveling exhibit, in from Chicago but augmented with selected local artists. The range of work is wide, occasionally surprising, and — which you might not expect from a show with such a pressing social mission — witty in spots. (Looking at you, “Seven Tragic Mountains.”) Some of the statements are blatant, others more complex, and perceptions of dogma may vary by viewer.

Neon: This is not the first socially conscious exhibit you’ve mounted here; what’s your overall curatorial perspective toward that kind of work?

Nancy Good: It fits the mission. Our mission primarily being education and discussion around what is art? And if I’m only showing one type of art, we’re never going to have that conversation. So I tend to curate the programming in a way that will often tackle some difficult subjects — from “My Two Cents,” which was a free speech show in which everyone brought in their interpretation of what free speech is, to this show, “American Roulette,” which is a commentary on gun culture, and the violence that is often perpetuated with that gun culture — but it’s not a political statement. It’s not saying Take away your guns or Let’s tackle the NRA, or Change gun laws. It’s about what are we doing about the violence that does get tied deeply to gun culture, and the trauma that’s experienced by bodies and families and communities, and how do we talk about it?

I’m a big believer in art as a language to tackle very difficult subjects, but often in very sensitive ways. I frequently hashtag ipaintwhaticantsay, because sometimes I don’t have words. But I can put together a work of art or invite other artists to also express what they can’t say verbally. They may not even feel safe saying things, but they can put it into a painting or a sculpture or a video or performance art.

I agree that the exhibit is not political in the sense of partisanship, but I wonder if some viewers might draw some fairly obvious conclusions from some pieces — there’s a canvas with red splatters … there’s some element of condemnation of gun culture that can be drawn from that.

Maybe not politics in the —

I’ve owned guns. I’ve hunted with guns. I’m not ever asking somebody to give up their guns. I’m not offended by someone’s possession of a gun. I take issue with someone posturing themselves in a violent way with a gun. Whether it’s perpetrating actual violence or just hinting that they could. That’s trauma as well, and that’s violence as well.

Issues of gun culture have been with us for a long time, obviously heightened since Columbine but for years before that. Does the social/political context we’re in in 2021 change the reception of a show like this? Would there be the same urgency if this was 2014 or ’15?

I believe a lot of that is also tied to people not feeling like they have a voice. But, by golly, if I pick up a gun, someone’s gonna listen to me. That’s what my sculpture piece (in the show) is about. How do we learn to have a voice? Are we taught to have a voice? Are our voices suppressed because of inequitable education? And if our education isn’t equitable, how are people being heard? I have great compassion for the cause and effect of why someone might be so unheard that they pick up an instrument of violence so that they might be heard through their fears and their anger and their frustration. I don’t condone it. But it’s deeper than just that moment.

Does art that is tethered in some ways to social issues or topicality, can that also fulfill what we think of as the traditional functions of art — encounters with the sublime, a sense of possibility for a different way of being?

I believe it can. It depends on the format and the intentions of the creator. Art is a language. Would we consider Diego Rivera’s art not art because he was tackling very strong political, social and cultural themes in a very pointed, provocative way?

There’s a surprising number of pieces that have some wit about them, which I wasn’t expecting. The lamp in the back, the satire on “Seven Magic Mountains.”

“Seven Tragic Mountains” — with materials that were taken from that area, because people have been shooting firearms out there for eons, so there’s a wealth of material.

Yes, there is humor, there are tongue-in-cheek aspects. I think mostly that’s to help us find safe places to have that talk. Finding ways to have discussions and talk about very difficult themes.

Some of the work is very personal. Michelle Graves shooting through pig ears with various gauges of shells. It’s visceral; you feel it. But then we have Dominic Sansone. And C.J. Hungerman’s very vibrant paintings.

But there are other pieces that are, let’s say, unambiguous.

The core collective of “American Roulette” and myself were the jurors for the submissions. Some of it was really easy to invite to the show. Some was difficult, and we had to have dialogue among ourselves and with the artists as far as their intention, because we didn’t want it to dive over that political line and become off-putting and change the conversation.

When someone walks in, what do you want them to come away with?

Hope. Hope that we can have discussions over very, very difficult topics. That we’re planting seeds. I’ve had people say this is one of the most difficult art experiences they’ve had, but also one of the best, because it wasn’t just hand-fed to them. No one was telling them what’s right and wrong.

I’m not threatened by someone believing something or experiencing something differently than I have. I have not experienced everything there is to experience in the world. I’ve got my own life perspective based on individual trauma. I was actually the unwitting target during a drive-by shooting when I was performing onstage in Montana. I was pretty much the only thing in my band that could be seen from where the person was driving by and shooting through. Bullets in the wall behind you; bullets in the ceiling. And that sticks with you. But I had tucked it away. Then Oct. 1 happens, and it’s like, Oh, crap, I still remember that. I’m alive. Other people aren’t. How do we fix this?

Are you prepared for someone to be offended by this and take it as an attempt to articulate a reason to take their guns?

Absolutely. But I’m not offended by other people’s offense. If someone else is offended, they have every right to be offended, based on their perspective.