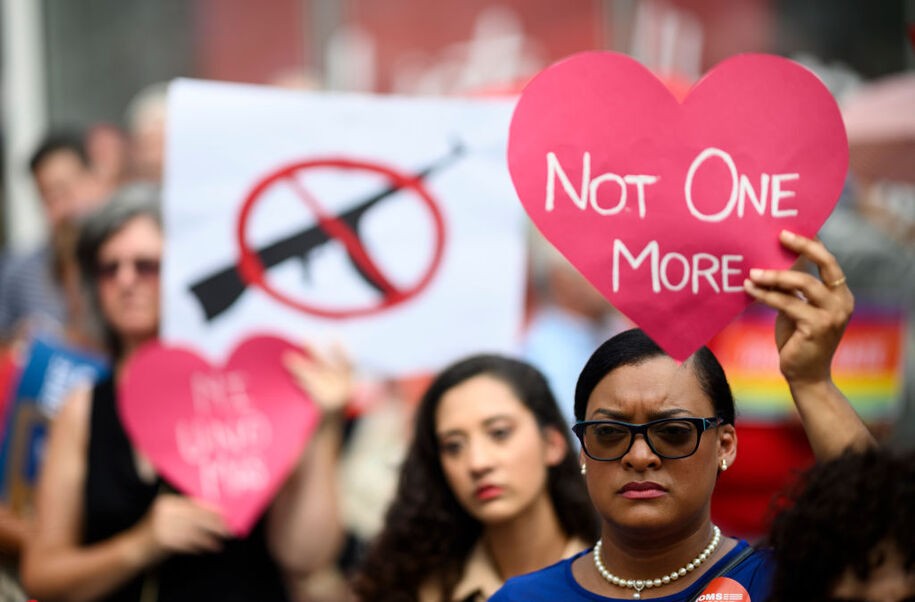 Then there’s the case of Philando Castile, who told the officer he had a registered gun during a traffic stop and was murdered in cold blood before explaining more. Or Jemel Roberson, who apprehended an armed man at gunpoint, was shot by police when they arrived. Or Emantic Bradford, who attempted to protect a crowd from a lone shooter at an Alabama mall, yet he was shot and killed by police. The 21-year-old lawfully carried a firearm.

In Georgia today, prosecutors will make final arguments in the trial of Ahmaud Arbery. The trial has highlighted that armed patrols were common in the neighborhood where he was tracked, chased, and shot by three white men.

The U.S. is a nation where the scales of justice are not equal when it comes to the skin color of a man or woman holding a gun. And this goes back to “Slave Codes or “Black Codes,” gun control laws designed to limit gun ownership by Black Americans.

Not long after President Lincoln issued the Emancipation Proclamation in 1863, and after the Thirteenth Amendment to the U.S. Constitution abolishing slavery was adopted and the Civil War ended in 1865, States persisted in prohibiting Blacks, who were now free, from owning guns under laws renamed “Black Codes.” The laws were allowed to exist because Black folk were not considered citizens and so did not have the same rights—including the right to keep and bear arms protected in the gun-lovers precious Second Amendment.

Saturday, at Atlanta’s airport, a gunshot rang out at a security checkpoint, grounding planes and causing panic. After an X-ray screening detected a “prohibited item” was found in a male passenger’s bag. When TSA officials tried to search the bag, the man reached for the gun inside, and it fired. The man fled. He had a felony record. This is just another example of America’s lax gun laws. In the first 10 months of the year, TSA officials nationally seized a record 4,650 firearms at checkpoints. Most of the guns found were loaded, Mother Jones reports.

There’s no denying that America loves its guns.

According to the Giffords Law Center to Prevent Gun Violence the U.S. has the weakest gun laws and the most guns—393 million—of any comparable nation. Americans are 25 times more likely to be killed in a gun-related homicide than people in other high-income countries.

Despite that around 48% of Americans see gun violence as a big issue in the country, four-in-ten U.S. adults (30%) say they personally own a gun, according to a Pew Research Center survey, and personal protection tops the list of reasons why.

This year, six states removed requirements to get a permit to carry a gun in public—the highest number in any single year. According to the Associated Press, 30 states have enacted “stand your ground” laws, which remove a citizen’s responsibility to walk away from a fight before considering using deadly force.

The Supreme Court is exploring a hugely important case involving the Second Amendment in New York, which could impact such large cities as New York and Los Angeles. Put into place in 1913, the case says that for a person to carry a concealed handgun in public, they must prove an actual need for the weapon. AP writes that justices were concerned that a broad ruling could threaten gun restrictions on subways, in restaurants, sports arenas, and other large gatherings.

In an interview with NPR, Melina Abdullah, co-founder of the Los Angeles chapter of Black Lives Matter, says the first thing she thought after Rittenhouse was acquitted was that she was sad for the families of the men who Rittenhouse murdered, but also how dangerous protests could now be for activists.

“If the system is going to, in a sense, condone the murders committed by Kyle Rittenhouse and the victims were white, what does that mean for me as a Black organizer, right?” Abdullah asks Adrian Florido, national correspondent for NPR covering race and identity in America.

So, how did America develop such a love for and an addiction to guns? Priya Satia, a history professor at Standford and the author of Empire of Guns: The Violent Making of the Industrial Revolution, says the history points to the British and the slave trade.

Satia tells Slate that the relationship between guns and the slave trade is inextricably linked.

“They [guns] were used in the slave trade and exchanged for slaves,” Satia says.

“Then they’re also used to enforce slavery on plantations. They’re an instrument of discipline, and oppression, and violence in the whole slave plantation system that the British helped create, that trans-Atlantic system. But even after the slave trade is abolished in 1807, guns remain a big part of the trade with West Africa. They’re just exchanged for other types of goods instead. The end of the slave trade doesn’t actually spell the end of the gun trade in West Africa, but what initially drives the gun trade in West Africa is the European interest in procuring slaves,” Satia adds.

Satia says that America has the political debates it does around gun control because of arms trading and the fact that the U.S. didn’t sign on to ratify an international arms trade treaty, the U.N. Arms Trade Treaty 2013. Why? Because the NRA lobbies against it. And the more other nations restrict guns, the more the U.S. becomes a booming market for gun manufacturers.

In other words, the British began using guns to trade for Black bodies, and America took up arms to fight to keep Black bodies enslaved. And law enforcement and the legal system maintain this.

This only further validates the need to abolish our current system. White supremacy cannot be reformed.

Like other activists, Justin Blake, Jacob Blake’s uncle, was stricken but not surprised by the outcome in the Rittenhouse trial.

“You can really smell and see the underlying systemic racism that’s in the judicial system and the policing system,” Justin Blake said after the verdict was announced, according to AP.