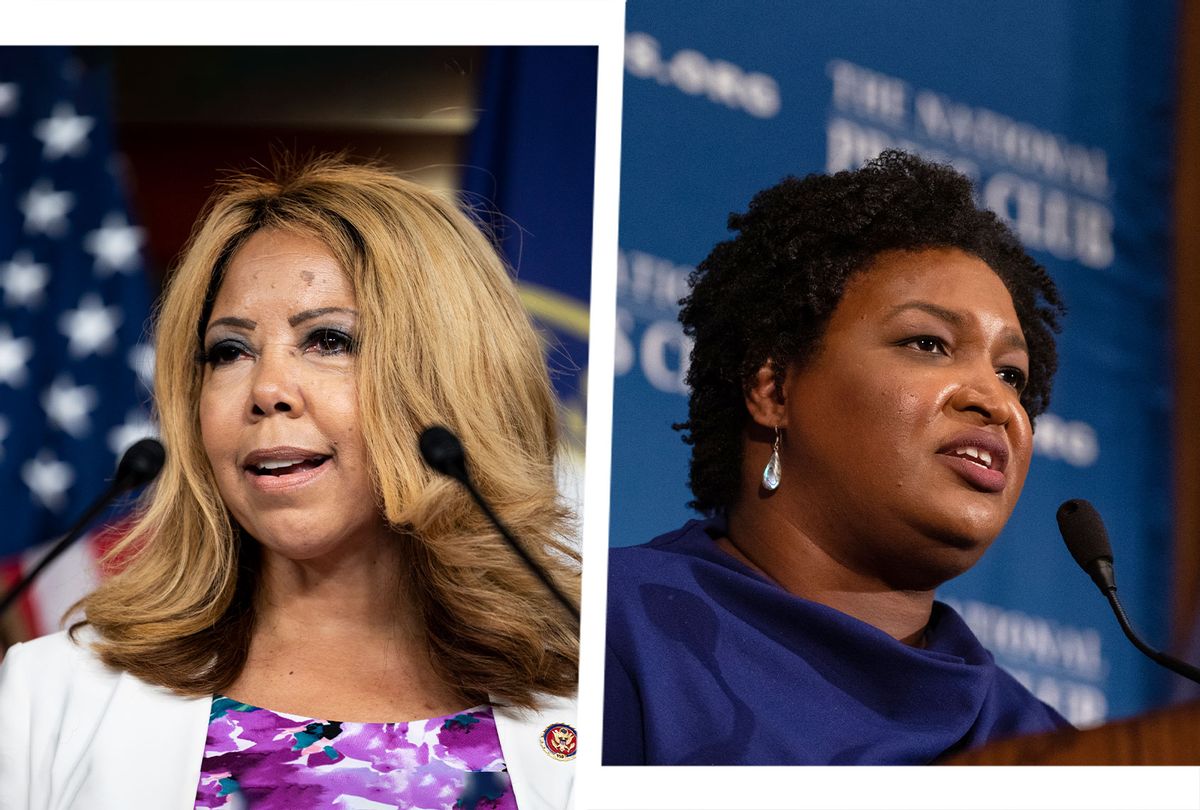 Voting rights advocates within and beyond Georgia ramped up calls for congressional action after the Peach State’s Republican lawmakers became the latest to approve a gerrymandered political map intended to give the GOP a political advantage for the next decade.

Following similar moves by GOP-controlled state legislatures in Ohio and Texas, the Georgia General Assembly sent the new congressional map to the desk of Republican Gov. Brain Kemp, who is expected to sign it into law. These redistricting efforts have come as right-wingers in the evenly split U.S. Senate block various voting rights bills and a handful of Democrats refuse to support killing the filibuster.

The Georgia GOP’s map is designed to increase the number of congressional districts the party controls from eight to nine, leaving Democrats with just five. According to an analysis by the Atlanta Journal-Constitution, “Though Georgia’s voters are split between the two political parties, none of the state’s 14 congressional districts would be competitive.”

It’s not just the new congressional districts that serve Georgia’s GOP. Democracy Docket notes that “the state House and Senate maps … were criticized by Democrats for cementing a Republican advantage in the General Assembly and failing to account for the growth of Georgia’s minority population.”

RELATED: GOP already has enough safe seats — through redistricting alone — to win back House in ’22

Common Cause Georgia executive director Aunna Dennis said in a statement Monday that “when the redistricting process is led by the politicians, the maps will be drawn to benefit the politicians—and that’s exactly what state legislators have done today.”

“While these maps might be beneficial to the politicians in power, they are a complete disgrace to the voters of Georgia,” Dennis declared. “None of the maps accurately reflect the changing population of our state.”

“Our preliminary analysis shows that despite population growth in the state being driven largely by Black, Latinx and Asian populations, and despite the state’s share of the white population decreasing by about 5% from 2010 to 2020, the amount of majority-BIPOC districts in these proposed maps have extremely marginal increases,” she noted. “In fact, the new congressional map decreases the amount of majority-Black districts from the former district map.”

Dennis said the maps were “intentionally designed to silence” communities of color and accused state leaders of continuing “to ignore the voters throughout the entire process.” She also reiterated her group’s support for independent redistricting commissions, saying that “district lines need to be drawn putting the interests of people, not politicians, first.”

“At a time when women are already underrepresented, particularly women of color, we should not be drawing maps that target women incumbents to make it harder for them to run and win in new districts,” Paris said during the House debate. “But the map before us today does exactly that.”

As the newspaper details:

The map redraws the Democratic-leaning district held by McBath, making it more Republican by extending north from metro Atlanta into conservative strongholds in Forsyth and Dawson counties. McBath won reelection last year with 55% of the vote, but under the new map, Republican voters would outnumber Democrats by 15 percentage points in next year’s elections, according to the AJC‘s analysis.

McBath flipped the 6th Congressional District in 2018, winning election in an area that was once a Republican bastion represented by Newt Gingrich, who became speaker of the House and led the GOP to take control of the U.S. House in 1994. Now the district is poised to return to Republican representation.

McBath — whose 17-year-old son was shot and killed in 2012 by a man who confronted him about the volume of his music — said Monday that Kemp, the Republican Party, and the National Rifle Association (NRA) “will not have the final say on when I am done fighting for my son.”

Voting rights advocate Stacey Abrams — a Democrat who formerly served as minority leader in the Georgia House of Representatives and narrowly lost the gubernatorial race to Kemp in 2018 — suggested in a series of tweets Monday that the new map shows the GOP is struggling to compete in the state.

“The bill will be eagerly signed by a man who has spent more than a decade using his status to disempower voters of color and intimidate the groups and individuals who organize them,” Abrams said. “But neither Lucy McBath nor Georgia’s organizers and voters of color will give up so easily.”

President Joe Biden narrowly won Georgia in 2020 — prompting then-President Donald Trump to pressure Kemp to call a special election and to ask Republican Secretary of State Brad Raffensperger to “find” more than 11,000 votes, moves that have led to a criminal probe in Fulton County.

Mother Jones’ Ari Berman, author of the book “Give Us the Ballot: The Modern Struggle for Voting Rights in America,” noted Monday that the new congressional map gives Republicans “64% of seats in a state Biden won with 49.5%.”

“It’s beyond enraging that Manchin and Sinema continue to say voting rights legislation needs 60 votes when [the] GOP [is] rigging elections and shutting Dems out of power for next decade on simple majority party-line votes,” he said, calling it “total asymmetric warfare.”

Calls for Senate Democrats to scrap the filibuster have mounted as the chamber’s Republicans have blocked the For the People Act, Freedom to Vote Act and John R. Lewis Voting Rights Advancement Act. The International Institute for Democracy and Electoral Assistance on Monday even labeled the United States a “backsliding” democracy.

“Voters should choose their politicians, not the other way around,” tweeted Sen. Raphael Warnock, D-Ga. “Today’s partisan redistricting decision at Georgia’s State Capitol undermines voters’ voices and harms our democracy.”

More on the redistricting battle that will shape the 2022 midterms:

How can we put an end to mass shootings in the U.S.?
10 Dead in Gun Violence Near Chinese Lunar Year Celebrations; Why So Many Shootings in America?
Analysis: Why Biden pushes an assault weapons ban despite the political odds
NRA sues to get Illinois semiautomatic weapons ban tossed
Powerful lawyers sue NY to allow guns in churches – Raw Story