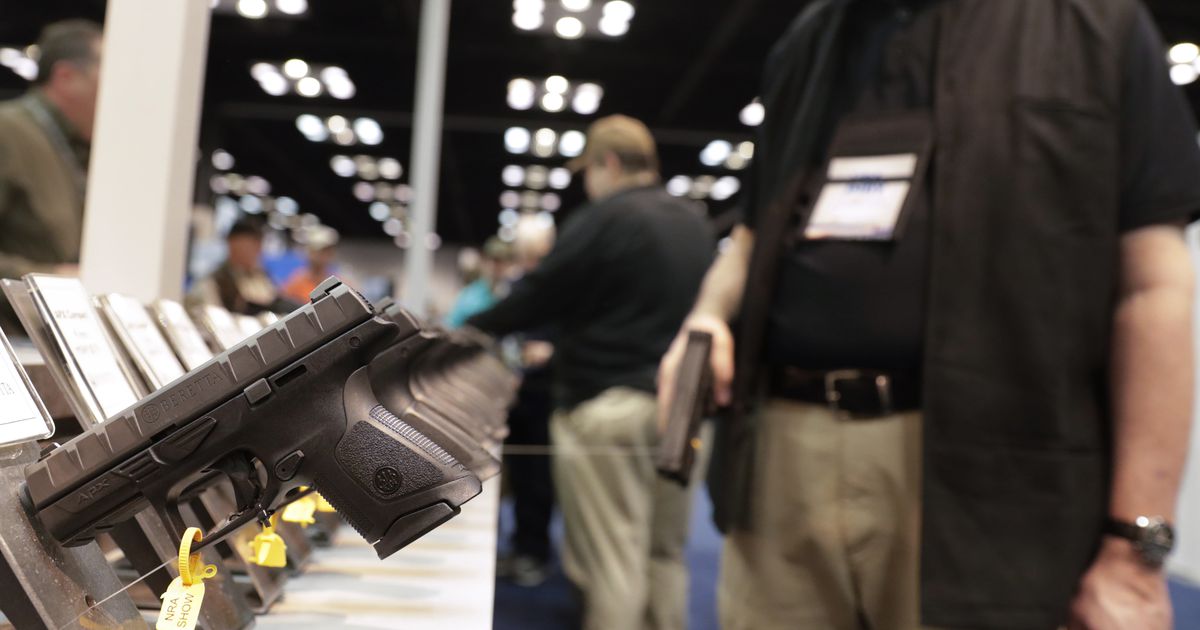 Focus gun laws on who can legally own a gun, not what kind of guns they should be able to own.

In this April 27, 2019, file photo, a gun enthusiast looks over the display of pistols in the exhibition hall at the National Rifle Association annual meeting in Indianapolis.

On Sept. 23, my parents called to tell me one of our friends was shot at their local grocery store in Collierville, Tennessee. She was one of 15 victims shot by a former employee of the grocery store.

The shooter had been fired the previous day. Earlier that morning, he went to the grocery store and had an argument with another employee and was asked to leave. He came back later that afternoon with three rifles and shot 15 people. One of those victims passed away from the injury. The shooter shot and killed himself after the attack. Our friend has since recovered physically from this attack, but trauma scars will forever remain.

Gun violence has been constantly on my mind since then. Did you know that more than 8,100 people were killed by gunfire in the United States from January to May of this year? That’s about 54 deaths per day, which is 14 more deaths than average for the first five months of the year than the past six years. Gun violence in America is drastically increasing. Methods for decreasing gun violence in the U.S. have caused political uproar in Congress and between American citizens.

What can we do to prevent gun violence from growing in America? According to a research study conducted at Boston University School of Public Health, the most effective gun laws in reducing homicide and suicide rates were laws focused on who has access to guns instead of laws limiting the types of available weapons.

The United States does not currently have federal laws regulating background checks for individuals who want to purchase a firearm, nor licensing requirements for buying and owning a firearm. These are two types of policies that could potentially save the lives of Americans.

Unlike laws regulating gun use and ownership, laws regarding the ability to drive and own a car are strict and straightforward. When I was 15, I was able to obtain a driving permit in the state of Virginia. There were laws in place which forced me to do a certain number of supervised driving hours, pass tests and reach a certain age before I was able to drive a car by myself. When I passed all those requirements, there were still laws in place that only allowed me to drive a certain number of passengers in my car until I turned 18. I now get my driver’s license renewed every five years.

When I purchased my first car there were also laws and regulations in place that I had to follow. I had to pay to get my car registered and it had to pass a safety test. My car needed a license plate, and I was required to purchase car insurance. I renew my car registration every year and pay for car insurance monthly. I have lived in four different states in my lifetime. The specifics of these laws vary from state to state, but wherever I have lived the basics of the laws have been the same: I need a valid and current license and my car need to be registered to order to own and operate it.

Why is this different for guns? How would the lives of the 15 people shot at the grocery store on September 23, and the lives of millions of Americans who have been affected by gun violence, be different if the United States had universal gun licensing and background check laws? Let’s talk with our local legislators to fight for federal laws that require universal background checks for all gun sales and licensing for gun ownership and operation.

Ashlee Olsen is a graduate student at the University of Utah in the College of Social Work.