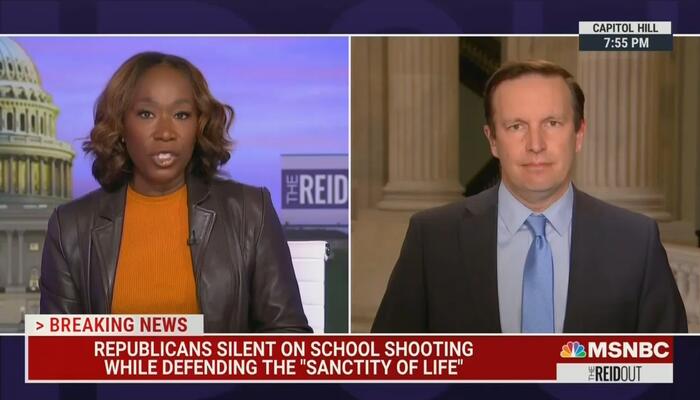 In the aftermath of Democratic Senator Chris Murphy accusing Republicans of hypocrisy over being “pro-life” in response to the school shooting in Michigan, several MSNBC hosts seized on the speech and used it to peddle anti-gun misinformation. In primetime, Chris Hayes and Joy Reid even had the Connecticut Senator on as a guest.

And, even though the current crime wave began in May 2020 as the liberal media and BLM activists tried to undermine confidence in the nation’s police officers, Murphy tried to blame the crime wave on an increase in gun sales and even on President Donald Trump.

On Wednesday, as Reid had Senator Murphy on The ReidOut, she engaged in her typical trash talk about Republicans, claiming that they want the right to cough on people and make them sick, and to have guns to “shoot up” places:

After Murphy repeated his claims that Republicans do not care about saving people’s lives, Reid declared:

I have started calling them just the “Get’em born and then it’s your problem” party because, right, they’re very much interested in birth, but they don’t seem to be interested in life, meaning educating children, providing health care for our citizens, preventing people from dying from gun violence… They don’t care about keeping people alive.

On Wednesday’s Morning Joe, Joe Scarborough also picked up on Senator Murphy’s anti-Republican speech, and, even though the gun used in the Michigan shooting was a handgun (as are most gun-related crimes) recently bought by his father after a background check, the MSNBC host repeated calls for more background checks and restrictions on AR-15s, and repeated discredited polling claiming gun control is popular with the public.

And, while Scarborough made a big deal about requiring background checks for gun purchases between individuals, studies have found that the overwhelming majority of guns used by criminals were acquired under circumstances that are already illegal — like theft or straw purchases.

No acknowledgement was made that gun sales from gun dealers already require background checks, as Al Sharpton, appearing as a guest, claimed that an AR-15 can be bought without a background check.

Mika Brzezinski took a parting shot at Republicans as she wrapped up the segment:

The anxiety that our children, that this generation is growing up with, is incomprehensible. And Republicans, they kind of own it. I mean, I don’t know what else they want to own at this point. This entire 40-minute block of television has been about the danger the Republican party is putting on the American public. And they will do nothing at this point, and they will say nothing. It’s got to stop.

This anti-Republican bias was sponsored in part by HughesNet and Liberty Mutual. Their contact information is linked.

MSNBC’s All In with Chris Hayes

CHRIS HAYES: It is an American problem. Shootings like this happen if not frequently, at least regularly, more regularly than they should across the country, which is why Senator Chris Murphy whose home state of Connecticut was the site of the horrific Sandy Hook shooting in 2012, took to the Senate floor tonight visibly angry.

SENATOR CHRIS MURPHY (D_CT): Do not lecture us about the sanctity — the importance of life when 100 people every single day are losing their lives to guns…This is purposeful. This is a choice by the United States Senate to sit on our hands and do nothing while kids die.

HAYES: It happens across the country — day in and day out — of hundreds of people being shot by guns. And it happens at a level that it doesn’t happen anywhere else, as you said, in wealthy democracies.

SENATOR MURPHY: And it’s happening at a rate, Chris, right now that we have not seen in decades —  2020 was the deadliest year in our lifetimes. We saw a 40 percent increase in gun murders, which was not coincidental to a 25 percent increase in gun sales. So we’re flooding the market with firearms that we choose not to regulate in a way that every other high income nation does.

We have a Republican party, as we talked about earlier in the show, that is engaged in the celebration and fetishization of violence, and we have a President, our prior President, who spent four years sort of making us fearful of each other, making us think we have to arm ourselves in order to protect ourselves from the other. It’s a toxic combination that has led to the highest rates of gun violence in our lifetime.

JOE SCARBOROUGH: You had a senator from Connecticut give a very stirring speech, Willie, about the culture of life. And the very people that are running around self-righteously beating their chests, talking about supporting pro-life issues are the very people who, of course, won’t do what 90 percent of Americans want and get universal background checks — won’t make it harder for people who are mentally unfit to have weapons, dangerous weapons, to have weapons and go shoot up schools and synagogues and churches and country music concerts. They are beholden to special interests in Washington, D.C., not beholden to life.

I think so much a part of this comes down to basic gun safety. If the NRA hadn’t stopped, like, doing their job and preaching gun safety like they did back in the ’50s and ’60s, and instead just become a crazy lobbying outfit…

AL SHARPTON: It’s interesting to me, the hypocrisy. You don’t want background checks on people carrying weapons that could kill people, but you want all kind of voter ID for people to vote. I mean, it doesn’t make sense. You need all of this identification to vote, but you don’t need identification to buy an AR-15. I mean, give me a break.

SCARBOROUGH: When you go back to the hypocrisy, people claiming to be the pro-life party are the same people that are for no gun safety — against any gun safety whatsoever — against universal background checks to protect our children.

MIKA BRZEZINSKI: The anxiety that our children, that this generation is growing up with, is incomprehensible. And Republicans, they kind of own it. I mean, I don’t know what else they want to own at this point. This entire 40-minute block of television has been about the danger the Republican party is putting on the American public. And they will do nothing at this point, and they will say nothing. It’s got to stop.

JOY REID: We are hearing near total silence from Republicans on another epidemic plaguing our country, deadly gun violence in our schools. Sadly, a fourth student has now died after a 15-year-old opened fire in a Michigan high school yesterday. It was the 28th school shooting this year. Joining me now is Senator Chris Murphy of Connecticut.

SENATOR CHRIS MURPHY (D-CT): Yeah, it’s pretty incredible. I mean, the lack of concern for life by Republicans given their cavalier attitude about the 700,000 Americans who have died, given their, you know, complete uncaring attitude about the 100 people killed every single day who die from gun violence. I mean, this is, you know, really incredible to see how far Republicans are willing to go in order to allow COVID to win — how callous they are willing to be to the families in Michigan right now who are dealing with an incalculable amount of grief.

And so, you know, it really is pretty unreal to listen to Republicans talk about their concern for the sanctity of life as this abortion case comes before the United States Supreme Court because, when it comes to the lives we are trying to save from a pandemic and gun violence, they are nowhere to be found.

REID: Yeah, I mean, I have started calling them just the “Get’em born and then it’s your problem” party because, right, they’re very much interested in birth, but they don’t seem to be interested in life, meaning educating children, providing health care for our citizens, preventing people from dying from gun violence, preventing kids from not (sic) having to do school shooting drills, right, and know how to respond when they think there’s a mass shooter, They don’t care about keeping people alive. It is something.