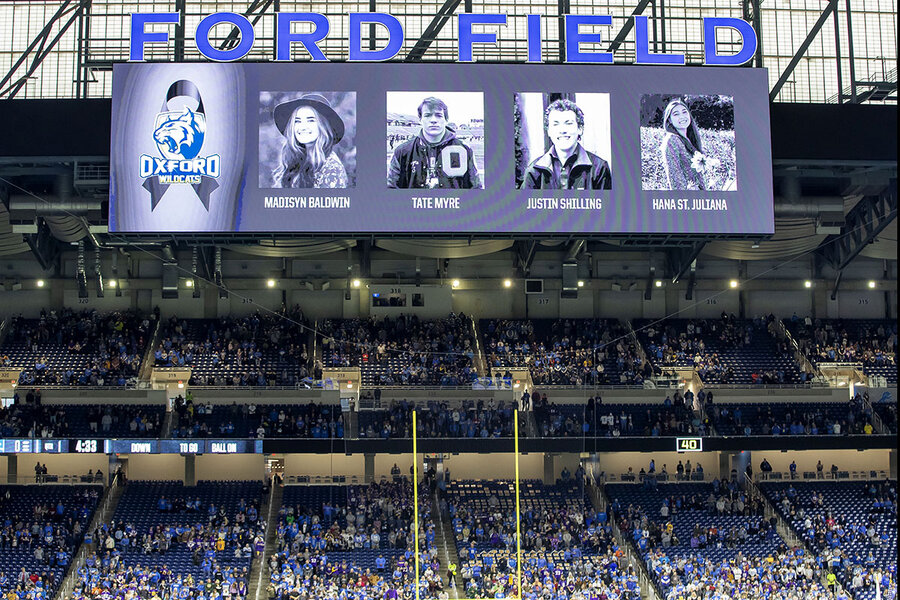 In a year that’s seen the most school shootings in at least two decades, the search for accountability and prevention is leading to parents.

A Michigan prosecutor quickly took legal action against the mother and father of a student gunman who is accused of killing four students last week. The parents were charged with multiple counts of involuntary manslaughter, in part for issues related to supervision and access to the gun. Their 15-year-old son is being charged as an adult with terrorism and multiple counts of first-degree murder.

Preventing school shootings has always taken a village. But new attention is being put on the role parents in particular play in monitoring and being responsible for student actions.

The rarely used tactic has generated some optimism about holding parents responsible and spurring tougher gun storage laws. Yet it may remain an atypical approach, some experts say. Thwarting future school shootings depends on a range of efforts, researchers suggest, including providing more mental health support, limiting access to guns, and helping parents know what to watch for.

The focus on the Michigan couple “brings up the question of what are the responsibilities of parents in homes where they have guns,” says Matthew Mayer, an associate professor at Rutgers University. “We have to look at the larger issues here and say how do we help educate and change the behaviors of parents nationally so that kids can’t get to the guns if they are in the home.”

In the days since four students were killed and seven other people were injured in a mass shooting at Oxford High School in Michigan, there’s been no shortage of questions about whether the attack could have been prevented and whom to hold accountable: the parents? The school? Both?

Charging the parents of the accused student gunman – which a Michigan prosecutor did quickly – is a rarely used tactic that has generated some optimism about holding parents more accountable and spurring tougher gun storage laws. Yet it may remain atypical for mothers and fathers to be charged, some experts say, suggesting that the measure is also more reactive than preventive. Thwarting future school shootings depends on a range of efforts, researchers suggest, including providing more mental health support and limiting access to guns.

The decision to focus on the parents in this case “brings up the question of what are the responsibilities of parents in homes where they have guns,” says Matthew Mayer, an associate professor of educational psychology at Rutgers University in New Jersey who specializes in school violence prevention. He points to studies showing that 4.6 million to 5.4 million children live in homes with access to guns.

Preventing school shootings has always taken a village. But new attention is being put on the role parents in particular play in monitoring and being responsible for student actions.

Michigan law does not require gun owners to lock their firearms, but possession of a gun by a minor is illegal, except for some instances of hunting with a license or under supervision of an adult. In the current case, the gun was apparently a gift that the father and son Ethan bought together four days before the shooting, according to prosecutors. The 15-year-old is being charged as an adult with terrorism and multiple counts of first-degree murder; the parents have been charged with multiple counts of involuntary manslaughter.

“We have to look at the larger issues here and say how do we help educate and change the behaviors of parents nationally so that kids can’t get to the guns if they are in the home,” Dr. Mayer says. “Part of it is education, but part of it is laws and regulations. It’s not going to happen just by force. You have to convince people that it’s an important thing to do.”

Even though school shootings are still relatively uncommon, there have been 34 so far in 2021, the worst year on record since at least 1999, according to data for K-12 schools analyzed by The Washington Post.

A separate Post analysis suggests that there’s little precedent for charging parents. Of 105 school shootings perpetrated by kids under age 18 between 1999 and 2018 where the source of the weapon was known, 80% of the weapons were from the shooter’s own home or the homes of relatives or friends, the Post found. Four adults were convicted during that time for not locking their guns.

Oakland County Prosecutor Karen McDonald addresses the media in her office, Dec. 3, 2021, in Pontiac, Michigan. Ms. McDonald filed involuntary manslaughter charges against Jennifer and James Crumbley, the parents of 15-year-old Ethan Crumbley. Ms. McDonald says the gun used in the shootings was purchased by Mr. Crumbley and given to the teen.

A 2021 study by the National Threat Assessment Center, run by the U.S. Secret Service, of 67 potential school shooting attacks averted between 2006 and 2018 found that the majority had unimpeded access to firearms in their home. Seven of the potential attackers were able to access safely secured guns by methods including prying the safe open, finding the key, or being given access to the safe.

Even so, there is a push for more legislation. Moms Demand Action, a gun control advocacy group, says 23 states and Washington, D.C., have some form of child access prevention, or CAP, laws that require gun owners to safely store their firearms. The group is calling for more laws and better enforcement of CAP laws and extreme risk protection orders (ERPOs), where a firearm can temporarily be removed from at-risk individuals.

“If we know where school shooters get their guns from and know they’re exhibiting warning signs, that means we can stop school shootings before they happen. We have to stop kids from getting their hands on guns in the first place, and that starts with secure gun storage,” said Shannon Watts, founder of Moms Demand Action during a press call on Dec. 2.

The National Rifle Association did not respond to a request for comment on the role of parents in preventing school shootings.

April Zeoli, an associate professor in the school of criminal justice at Michigan State University, who studies ERPO orders, says they rapidly expanded in states after the 2018 shooting in Parkland, Florida, and are now found in 19 states and Washington, D.C. In forthcoming research on ERPO laws in six states, she says she’s seen examples of law enforcement using the judge-approved petition to temporarily remove all guns from homes where a potential school shooter lives.

“We do have tools to prevent this kind of thing from happening. These tools [ERPOs] aren’t in place in every state … but there are things that we can do so school shootings don’t have to be inevitable,” Dr. Zeoli says.

A more defined role for parents is emerging in public conversations about prevention. After multiple shooting incidents at or near high schools in Aurora, Colorado, the police chief specifically asked for help. “I need the parents to get involved. I need you checking phones. I need you checking rooms. I need you checking cars. And make sure that they’re taking these guns away from these kids,” said Police Chief Vanessa Wilson at a Nov. 19 press conference after three students were shot in a school parking lot.

Parents need education about how to recognize warning signs that mass shooters often show, such as visiting a website that glorifies past school shooters, an obsession with firearms, or suicidal tendencies, says Ron Avi Astor, a professor of social welfare who studies school violence prevention at the University of California, Los Angeles. And once parents have concerns, he says, there need to be clearer messages about where they can turn for help.

In the Michigan case, what the parents, James and Jennifer Crumbley, knew ahead of time may also come into play. Prosecutors say that Ms. Crumbley texted her son “LOL, I’m not mad at you. You have to learn not to get caught,” after a teacher found him searching online for ammunition the day before the attack. Hours before the shooting, the parents came to school for a meeting to review a violent picture that a teacher saw Ethan drawing in class, according to the school district superintendent. The parents reportedly refused to bring their son home, as school officials desired, and did not disclose that he had access to a firearm.

An image from the first division of the 52nd District Court shows a Zoom arraignment for James and Jennifer Crumbley in Oakland County, Michigan, on Dec. 4, 2021. The parents pleaded not guilty to involuntary manslaughter charges.

“I have tremendous compassion and empathy for parents who have children who are struggling and at risk for whatever reason. And I am, by no means, saying that an active shooter situation should always result in a criminal prosecution against parents. But the facts of this case are so egregious,” Oakland County Prosecutor Karen McDonald said in a press conference on Dec. 3, when she announced four charges of involuntary manslaughter against each of the parents. The charges carry a maximum 15-year prison sentence.

Whether or not the charges will succeed depends on whether prosecutors can convince a jury that the parents were “grossly negligent” in the way in which they maintained their gun, and what their state of mind was regarding knowledge of their son’s possible intentions to use the gun, says Larry Dubin, emeritus professor of law at the University of Detroit Mercy. “I think all of those facts, if you could think of them in the most incriminating way, could theoretically establish the crime of involuntary manslaughter,” says Mr. Dubin.

A menu for prevention

Strong gun laws are important, but aren’t the only factor for deterring violence, says Dr. Mayer, from Rutgers.

“A determined perpetrator of violence isn’t going to be stopped, and we have to think more of preventive measures and not reactive measures, and that’s something where we’ve had difficulty coming together on,” says Dr. Mayer, who notes that he doesn’t support excessive security, where teachers are armed or schools feel like fortresses.

Some researchers think preventing future school shootings should be seen as a broader public health effort. Dr. Astor and Dr. Mayer helped lead a group of scholars to publish a holistic public health plan in 2018 to prevent gun violence at schools. The document is endorsed by more than 4,000 individuals and hundreds of national organizations, and includes efforts to prevent violence by building stronger, healthier school communities and families through things like bullying prevention and threat assessments.

“What I like about that approach is it doesn’t get us stuck in this Second Amendment rights issue that everybody seems to gravitate to almost automatically, of ‘there’s nothing you can do’ or ‘eliminate all guns,’” says Dr. Astor. “There’s a lot you can do in between.”