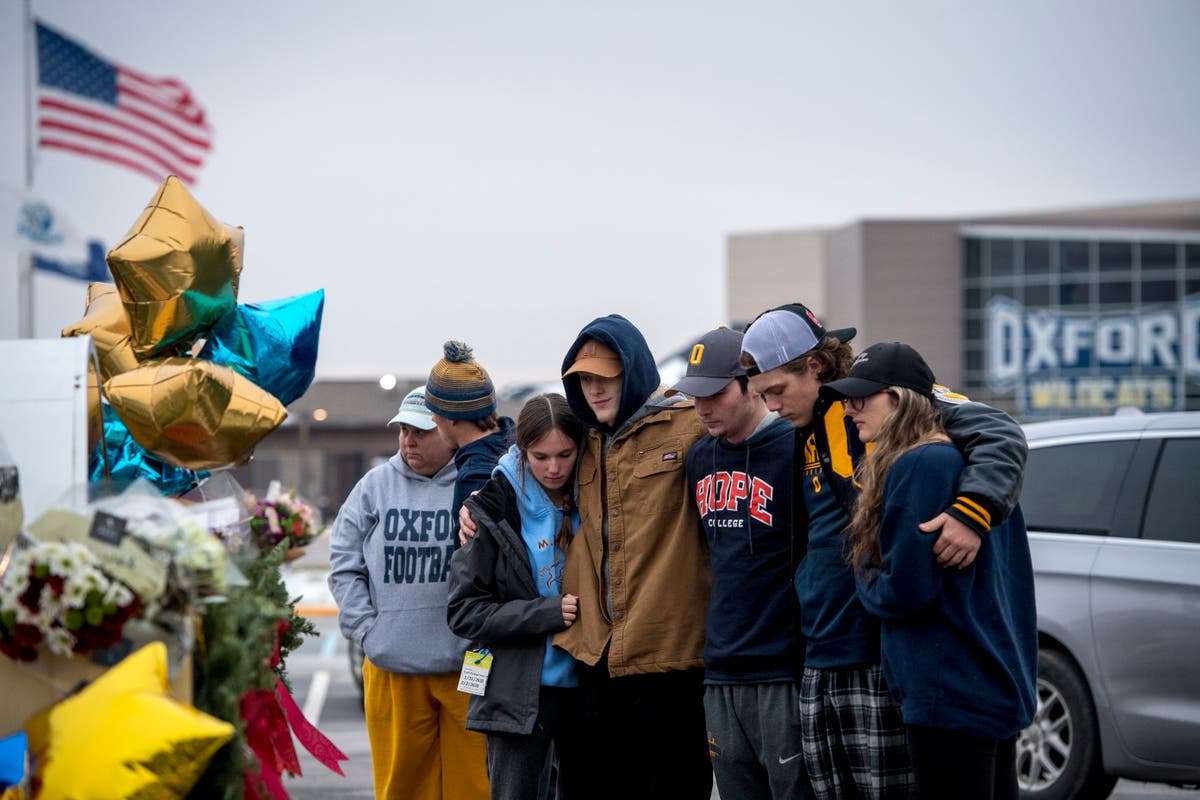 When Manuel Oliver watched President Joe Biden deliver a generic, nondescript statement about the latest in a string of mass shootings tearing apart American families, he decided that enough was enough.

It was 30 November and a teenage gunman had opened fire inside a high school in Oxford, Michigan, with a gun it later emerged was a Christmas present from his parents, according to authorities.

Four students were killed in the attack and seven other people were hospitalised.

The president was informed about the massacre while doing a tour of Minnesota that day and addressed it at the start of a speech at a technical college.

“My heart goes out to the families enduring the unimaginable grief of losing a loved one,” he said.

Mr Oliver immediately packed a bag and travelled from his home in Florida to Washington DC.

For the nine days since, he has stood outside the gates to the White House demanding a meeting with Mr Biden about what he says is a failure to deliver on his campaign promises to end the nation’s gun violence epidemic.

“When I saw the response from the president with a simple ‘our hearts are with the families’, that’s when I thought we’re not moving forward,” he told The Independent by phone from his position outside the White House on Thursday.

“As a nation it’s like it’s being accepted that this happens.”

Mr Oliver knows the devastation wrought by gun violence all too well.

His son Joaquin “Guac” Oliver was one of the 17 victims murdered in the mass shooting at Marjory Stoneman Douglas High School in Parkland, Florida, on Valentine’s Day in 2018.

Joaquin, who was 17 at the time, was shot multiple times by 19-year-old gunman Nicolas Cruz along a third-floor hallway moments after leaving a creative writing lesson.

Last week, after seeing yet more families losing their loved ones in a school shooting, Mr Oliver said he felt “empowered” to do more.

“People think that seeing it happen again is like a flashback and makes us suffer again but, as much as I cry for my son, this is a moment to be empowered and go forward to do things for other children,” he said.

“It makes me feel guilty and part of the problem as, after being an activist fighting against gun violence for the last four years, we are still seeing kids being shot in schools.

“I can’t save my son Joaquin but I can help other kids.”

Since their son’s death, Mr Oliver and his wife Patricia Oliver have worked as gun control activists.

Two years ago, they met with Mr Biden when he was running for president.

Mr Oliver said the then-candidate had promised them that tackling gun violence would be a main priority if he was elected. Believing him, the parents campaigned to get him in the White House.

Now, they feel Mr Biden has broken that promise.

“He told us he had battled against the NRA and the gun industry before and so knew how to do it and would do it again,” said Mr Oliver.

“You don’t promise this just because. When you’re talking to a father and mother who lost a kid because of guns every word matters.”

Mr Oliver said he put “all of my hopes” in the Biden administration finally taking decisive action on gun reform – hopes that he said are “vanishing”.

“I don’t see any responses from the administration that shows this really is a priority,” he said.

A plan to tackle a public health epidemic

Mr Biden ran his campaign on promises to end what he described as the “public health epidemic” that is gun violence.

As the race for the White House ramped up in 2020, he outlined a sweeping gun control plan that included a ban on assault weapons, universal background checks, and red flag laws for firearms to be taken away from people deemed a risk to themselves or others.

In the plan, Mr Biden pledged to go after gun manufacturers, by repealing the Protection of Lawful Commerce in Arms Act so that they can be held liable when crimes are committed with their products.

Responsibility would also be placed on gun owners themselves, with laws to hold adults accountable when they allow children to access firearms, laws on safe gun storage and a plan to increase the rollout of smart guns (where fingerprint technology means guns can only be fired by authorised users).

Then there were promises to introduce universal background check legislation and close several loopholes in existing laws that currently allow some people to slip through the net.

Mr Biden said this would ensure guns could not fall into the hands of people who pose a risk to themselves or others.

During his campaign, he repeatedly pointed to his past record fighting for gun control as evidence that, if elected, he would do it again, boasting that he has “taken on the NRA on the national stage and won – twice”.

As a senator in the 1990s, Mr Biden helped to pass a 10-year assault weapons ban as well as the Brady Handgun Violence Prevention Act which requires federal background checks and a five-day waiting period on people buying firearms.

Then, in 2012, as vice president to President Barack Obama, Mr Biden was tapped to overhaul the nation’s gun policies in the wake of the Sandy Hook Elementary School massacre which left 26 dead.

After putting forward 23 executive actions and three laws, he decided to focus on trying to pass a bill expanding background checks in the hopes that it would get enough support in Congress.

But, amid criticism that Mr Biden was too slow to act, the bill failed.

Now, history appears to be repeating itself.

While the plans and promises of his presidential campaign were music to the ears of gun control activists – particularly after President Donald Trump spent the last four years relaxing gun laws – so far the reality has fallen dramatically short.

The president is once again struggling to get enough support from the Senate to enact legislation, where the floor is split 50-50 with Republicans and Democrats.

Some, limited actions have been taken, however.

In April, Mr Biden announced six executive actions to tackle what he described as the “international embarrassment” of gun violence in the US.

These included: a crackdown on “ghost guns” (firearms without serial numbers which means they are difficult to trace); directing the Department of Justice (DOJ) to put forward models of red flag legislation and a report on firearms trafficking; a $1bn investment in evidence-based community violence intervention (CVI) programmes; tightening regulations on pistol-stabilising braces; and nominating David Chipman as director of the Bureau of Alcohol, Tobacco, Firearms and Explosives.

This summer, the administration also announced that state and local governments can use the $350bn of pandemic relief money for CVI measures to help tackle escalating gun violence.

But, without bipartisan support in Congress, Mr Biden’s powers to bring stricter gun control laws into force are somewhat limited.

And even some of his executive actions have stalled.

In September, Mr Biden withdrew his nomination of Mr Chipman as it became clear he didn’t have enough bipartisan support for confirmation.

Meanwhile, rules around ghost guns are still yet to be finalised.

All the while gun violence has surged since Mr Biden took office.

According to figures from the Gun Violence Archive, there have been 658 mass shootings so far in 2021, as of 10 December – already more than the 611 mass shootings recorded for the whole of 2020.

Mass shootings were already escalating under the previous administration, almost doubling during Mr Trump’s time in the White House from 382 in 2016 to 611 in 2020.

But the problem appears to be worsening with a string of massacres in recent months.

Back in March, eight people including six Asian women were shot dead when a gunman went on a shooting rampage across three spas in Atlanta, Georgia.

In April, a gunman opened fire at a FedEx warehouse in Indianapolis, killing eight people before turning the gun on himself.

Every single day, 100 people are dying from gun violence in America, according to the Educational Fund to Stop Gun Violence.

This figure is especially poignant, explained Mr Oliver, given that there are also 100 people in the Senate who have the power to pass stricter gun controls into law and save lives.

“These 100 people are deciding whether 100 Americans will die today and tomorrow and the next day… it makes no sense,” said Mr Oliver.

Instead, Mr Oliver said the president needs to declare a national emergency on gun violence and lay out a solid plan for reducing gun violence in his State of the Union address in order to urgently move the dial.

“He needs to call it for what is – a national emergency – and, as the president, he should create a new narrative around this,” he said.

“He can and should declare a war on gun violence today.”

As the president, “a strong first step from Biden can get society on board”, said Mr Oliver.

After that, he thinks corporate America, everyday citizens and more lawmakers will rally and become part of the solution.

Mr Oliver said he believes Mr Biden does care “a lot” about gun violence but has not yet taken “radical” action.

“What’s been done so far isn’t even close to enough,” he said.

“Bills won’t save lives unless they are turned into law and that isn’t going to happen right now.

“So we need a president who stands for fighting gun violence in a radical way, who is offended by kids being shot, who is willing to take action beyond politics.”

Mr Oliver is demanding a meeting with the president to establish what concrete steps his administration is taking to tackle the epidemic.

And he will continue his crusade outside the gates to the White House until he gets it.

“I’m not going anywhere – I’ll stay as long as it takes until I meet with Biden at the White House and we have the conversation that I’m looking for,” he said.

“Me being here is not a sacrifice as it’s not even close to what my son Joaquin went through so I can stay forever.”

He added: “This meeting is happening. It’s only a matter of when.”

The Independent has asked the White House for comment.